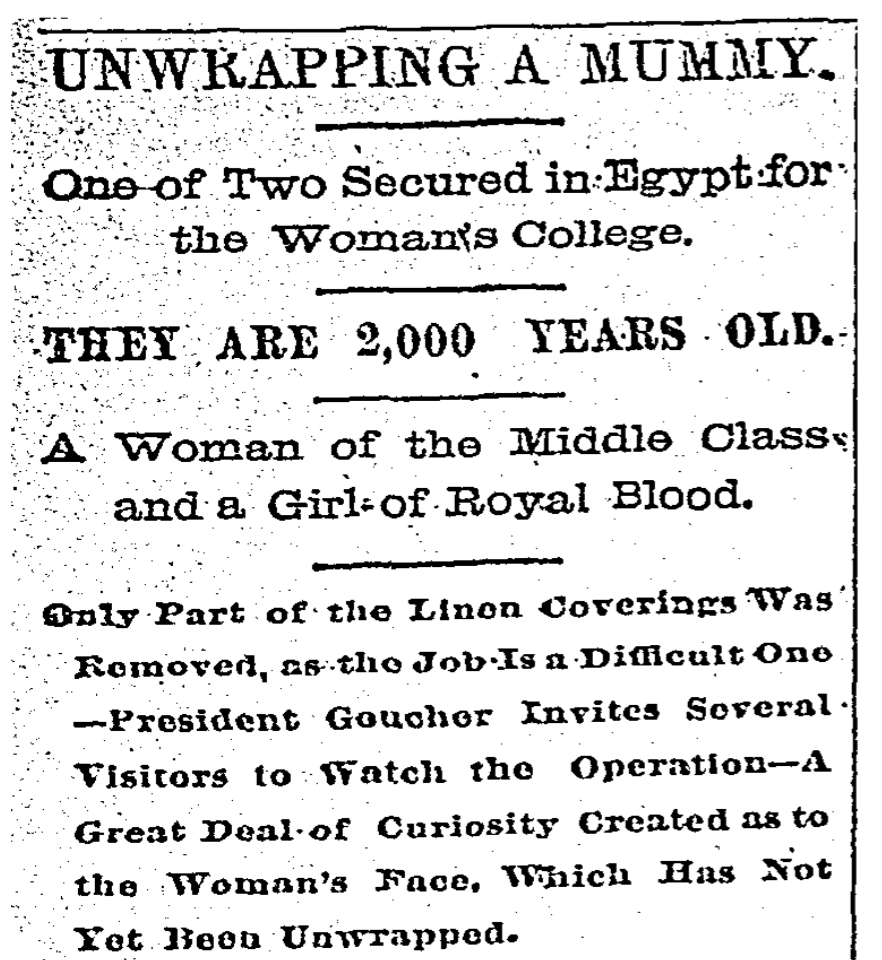 Little in the way of funerary goods accompanied the Goucher mummy from Egypt to Baltimore, though an 1895 Baltimore Sun newspaper article (shown on the left) mentions a “gaudily decorated case in which it had rested for two thousand years.” As there is no other mention of the coffin, it appears to have been lost or perhaps discarded. However, four fragments of cartonnage (plastered and painted linen) were still placed on this ancient individual’s lower body when she was brought to the Archaeological Museum, which stylistically date to between the end of the Late Period and the beginning of the Ptolemaic Period (ca. 4th c. BCE). Though currently extremely fragmentary, it is possible to reconstruct them as part of a “boot” depicting sandals that once encased the mummified woman’s feet. (A digital reconstruction is visible below.) Sandals were worn in everyday life and also had ritual functions. Spell 125 from the Book of the Dead, a collection of spells for entering the afterlife, instructs the deceased to purify herself, to put on her garments and white sandals, to apply black eye-paint, and to anoint herself with myrrh before entering into the hall of judgement.

Depiction of the “boot” as it was originally placed on the mummified woman.

This fragment shows a row of seated protective deities wielding knives that would have been placed just above the ankles with the deities facing toward the mummified woman. The white curving lines represent sandal straps that once ran between her big and second toes, while the alternating red and black lines represents a papyrus plant lying between her feet. Another fragment of this boot (not on display) depicts the woven basketry soles of the sandals. Recent technical imaging shows that the blue elements were painted with Egyptian blue, a pigment that had important symbolic meanings in antiquity.

A fragment of cartonnage in visible light (L) and in visible infrared luminescence (R); the glowing areas are painted with Egyptian blue.
Page load link
Go to Top