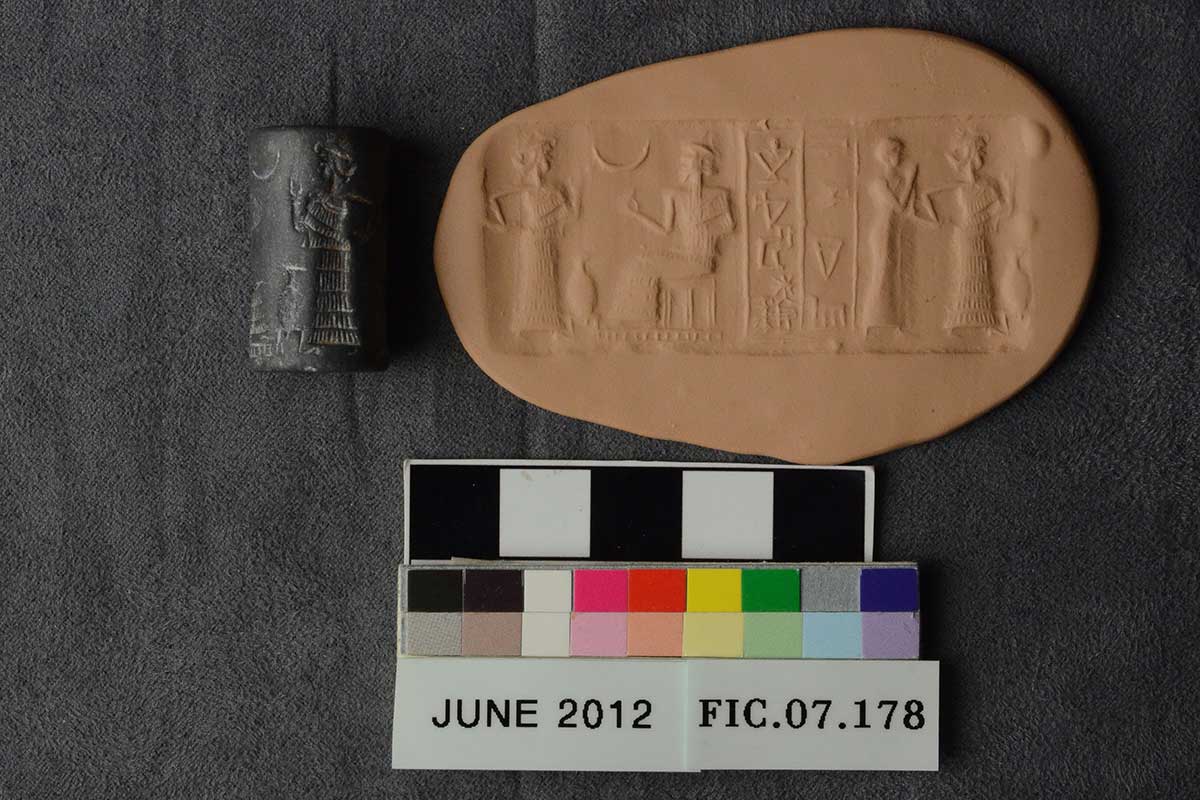 The black hematite seal (FIC.07.178) on the left has been rolled onto brown synthetic clay to reveal the full image. Read more about this object under “Presentation Before a God” in this Object Story.

Cylinder seals are engraved, cylindrically shaped objects – usually made of stone – designed to be rolled into clay to leave impressions. The engraved images, and usually text, are carved in reverse, so that when rolled out onto clay they face the correct direction.

The use of cylinder seals developed alongside that of the cuneiform writing system, invented in Mesopotamia near the end of the 4th millennium B.C.E.; prior to this, stamp seals (designed to be pressed onto clay or other media, rather than rolled) had served similar purposes. Cuneiform was written on clay tablets, and cylinder seals were better suited than stamp seals to quickly fill empty spaces. Cylinder seals remained the most popular form of sealing until the 1st millennium B.C.E., when parchment or papyrus gradually replaced clay as the predominant writing material, and stamp seals again became more popular.

As the use of seals spread throughout the Near East, individual styles and traditions developed. The designs and figures carved on cylinder seals are often indicative of period, region, and context of use. Alongside stylistic variation, certain themes and subjects went in and out of style across time and cultures, often spanning several periods or regions:  these include contest scenes, in which warriors grapple with animals or monsters; presentation scenes, in which a worshipper – probably the owner of the seal – is shown approaching a god or goddess; scenes showing a king or warrior alongside a protective personal goddess; hunting scenes; and other scenes involving deities. Filling motifs – figures or objects depicted in the spaces around the main scene – are another common feature on cylinder seals. They were probably chosen by the seal’s purchaser, to be added by the engraver at the time of purchase. Some represented a particular deity – for example, a lightning bolt represented the storm god – and would have been added in the hopes of ensuring that deity’s favor; others are less clear in their meaning. Finally, seals could be personalized by means of inscriptions. These often identified the seal’s owner, or invoked the name(s) of a deity or deities.

The Johns Hopkins University Archaeological Museum’s collection contains forty-four seals from the ancient Near East, thirty-five of which are cylinder seals. These were acquired at various points during the museum’s history, beginning in the late 1800s C.E. A large number of Cypriot seals were donated by Theodore Marburg in 1900, some of them coming from Cypriot excavations. Another set of seals was added in 1926, as part of the collection of artifacts bequeathed to the museum by Assyriologist Paul Haupt, who was also Professor of Semitic Language at Hopkins from 1883 to 1926.