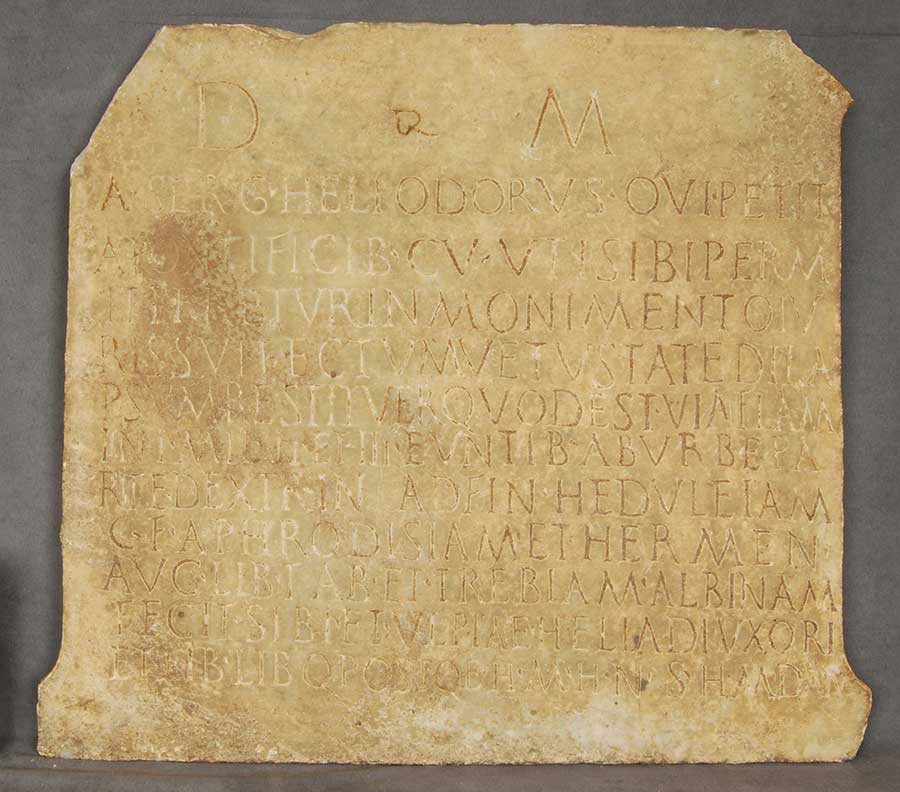 “Aulus Sergius Heliodorus who had asked from the pontifices , the most famous men, that it may be permitted to him to restore the collapsed roof of his monument in accordance with the law. The monument is located on the Via Flaminia between the second and third milestone; when walking on the right from the city, it is between the adjacent [tombs] of Heduleia Aphrodisia, daughter of Gaius, and of Hermes, freedman and record keeper of Augustus, and [the tomb] of Trebia Albina.

[Aulus Sergius Heliodorus] built this tomb for himself and his wife Ulpia Heliada and for his freedmen and freedwomen and their descendants. May this monument be free from evil wrongdoing.”

This inscription marked the tomb of Aulus Sergius Heliodorus, his wife, and his freedmen and freedwomen as well as their descendants. It is apparent that Heliodorus was still alive at the time of the inscription since it records a restoration on his tomb, not his death. It was a common practice to built a family tomb during one’s lifetime, and if the building fell into disarray, it was restored and recorded, as seen in this inscription. According to the inscription, the roof of the tomb had collapsed, and Sergius had received the permission of the pontifices to restore it. The pontifices were a group of priests who, among other things, were in charge of tombs. The location of this tomb is also described precisely by locating it between other tombs.