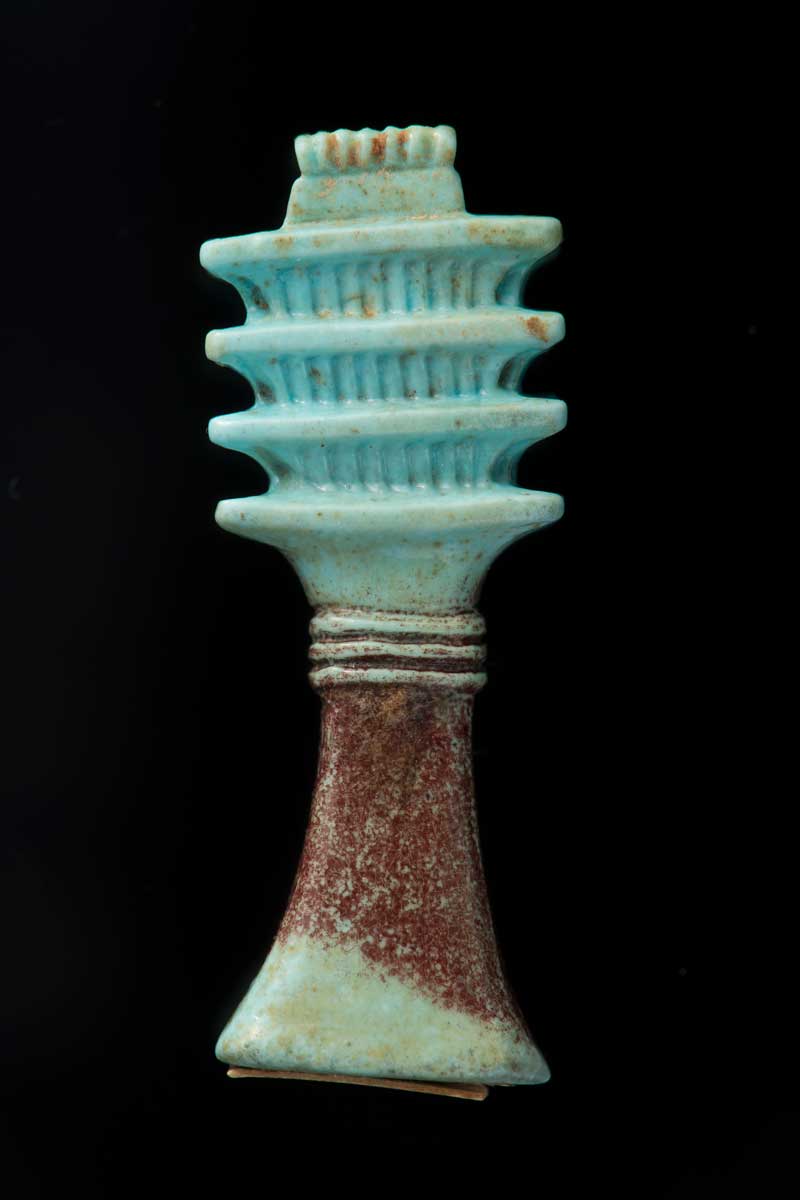 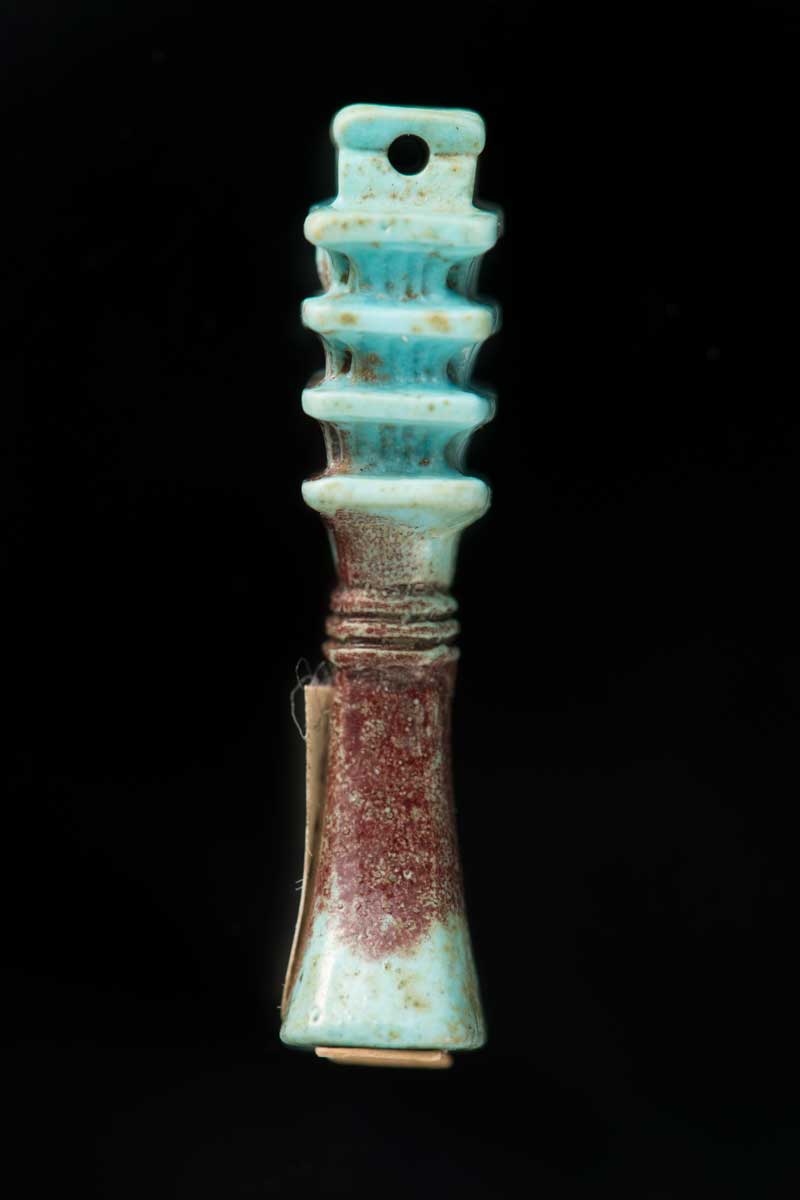 This djed-pillar amulet is made of a bright blue faience with large sections of a brownish-purple colorant throughout. A suspension bar has been included at the top of the djed-pillar, which is slightly lopsided.

This faience djed-pillar has been rendered with great care and a high level of incised detail. A very small hole is pierced through the top of its back-pillar horizontally for suspension. 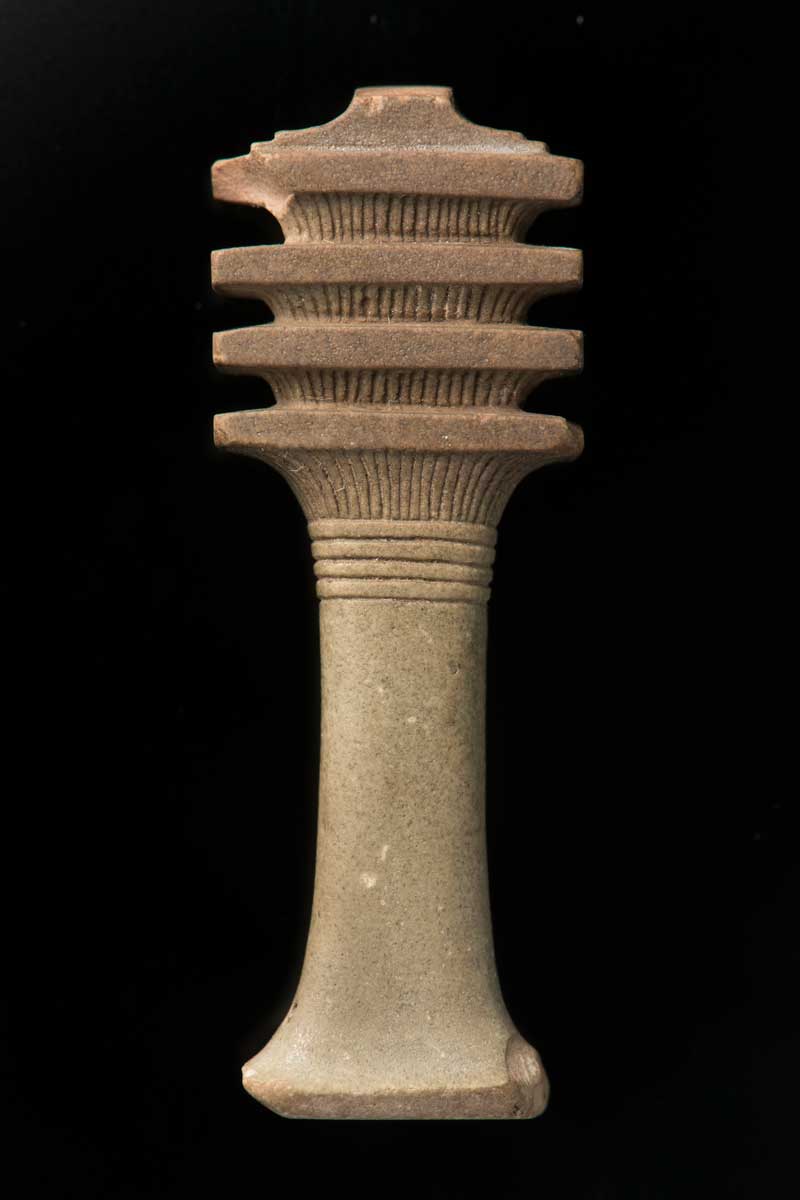 This symbol was Osirian in nature and was primarily associated with themes of rebirth and regeneration. According to legend, Osiris, the king of the ancient Egyptian pantheon, was murdered by his brother, Seth, the god of chaos. After his passing, his consort, Isis, and son, Horus, revived the god so that he could serve as the chief deity of the netherworld. The djed-pillar was designed as a symbol of Osiris and later came to be understood as a representation of his backbone. In fact, in several Book of the Dead spells, representations of the symbol are used to help reinstate the vertebrae of the deceased and consequently revive them for his or her rebirth into the afterlife. When worn as an amulet, the symbol helped to invoke the regenerative powers of Osiris. The djed-pillar also served as a common hieroglyphic symbol, representing the ancient Egyptian word for “stability.”

As one of the most common Egyptian amulets, djed-pillar amulets have a long history, dating back to the late Old Kingdom (ca. 2686-2160 BCE). Due to their Osirian associations and powers, djed-pillar amulets were most frequently used in funerary contexts. The amulets were often strung together and laid across the lower torso of a mummy, especially in the later periods of ancient Egyptian history, and also around the neck. Green and blue — as seen in these examples — are the most commonly attested colors of these amulets, enhancing the regenerative powers of the amulets through their connection with the fertility and renewal provided by the Nile and its vegetation.