Plaque with the Theban Triad 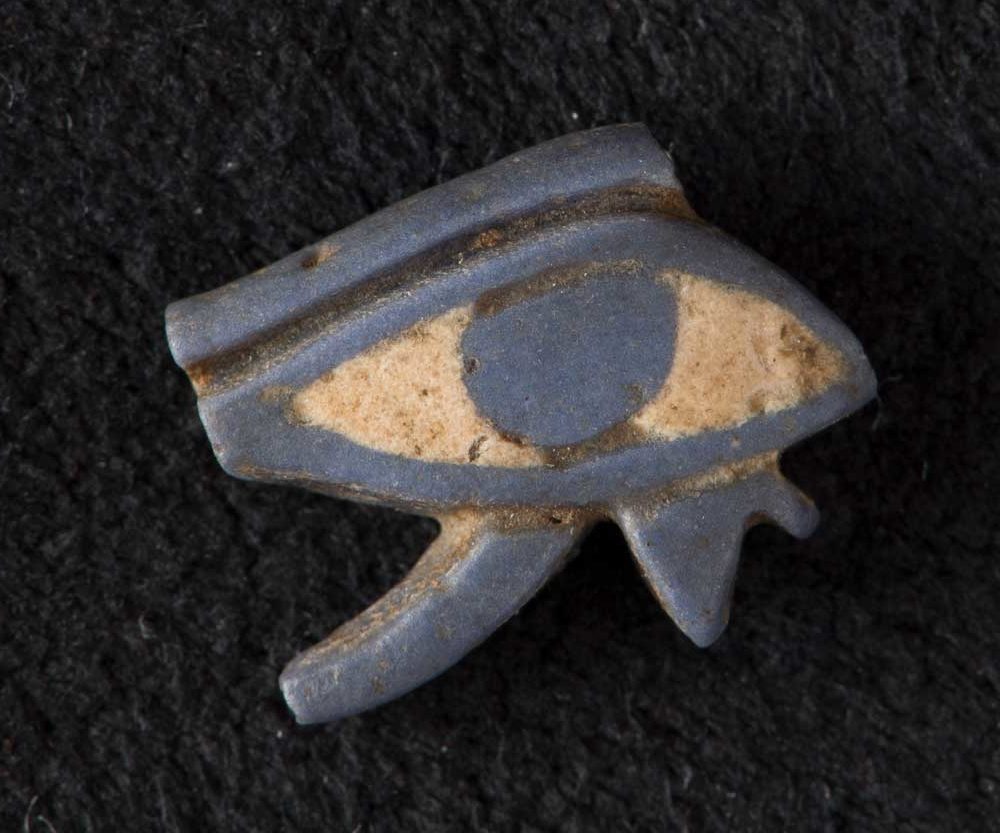 This polychrome faience wedjat eye depicts a right eye. The eyeball is depicted in white, with the pupil and cosmetic lines in blue. Its back is flat and undecorated.

This amulet of pale turquoise faience depicts a highly detailed right wedjat eye. Careful attention has been paid to the depiction of the eyebrow and to the rendering of the cosmetic lines. There is a grooved suspension loop at the top. The back of the amulet is flat and undecorated.

This faience amulet is red in color and depicts a right wedjat eye. It is pierced through lengthwise and is flat on the back.

The wedjat eye is one of the most common icons associated with ancient Egypt. This is because the eye fulfilled a number of different roles in Egyptian mythology, thereby lending itself to many different amuletic uses. Wedjat eyes could be either left or right eyes, the left lunar eye being that of the powerful falcon-headed god, Horus, and the right solar eye being that of the sun god, Re. The “eye of completion” (the Horus eye) is lunar because, like the moon, it waxes and wanes. The lunar eye of Horus, as the eye of completion, is a healing and regenerative entity, thought to bring health and safety to its wearer. Likewise, the regenerative eye of Horus was thought to help the dead pass safely into the afterlife, and wedjat eye amulets were commonly placed within mummy wrappings to help the dead. In one myth, Horus presents his healed eye (repaired by the god of wisdom, Thoth) to his deceased father, the lord of the netherworld, Osiris, to help him pass safely into his afterlife.

The right wedjat eye, the solar eye of Re, was thought to be embodied by a vengeful but protective feline goddess. Like the Horus eye, the eye of Re was thought of as protective entity. Her ferocity warded away evil, protecting those who used the image apotropaically.

The color green held associations with fertility and rebirth for the ancient Egyptians, especially in an Osirian context. Wedjat eyes were most commonly made in green and blue-green faience, like the objects seen here, JHUAM 3685 and 2031 D. Other colors could hold other meanings, like the solar significance suggested by the red color of 3671. The markings above the eye represent a typically Egyptian cosmetic line and those underneath the eye are thought to mirror those observed under the eyes of the lanner falcon, a form which Horus frequently assumed. Very specific proportions were ideally maintained by artists in rendering wedjat eyes, but these were not always upheld. 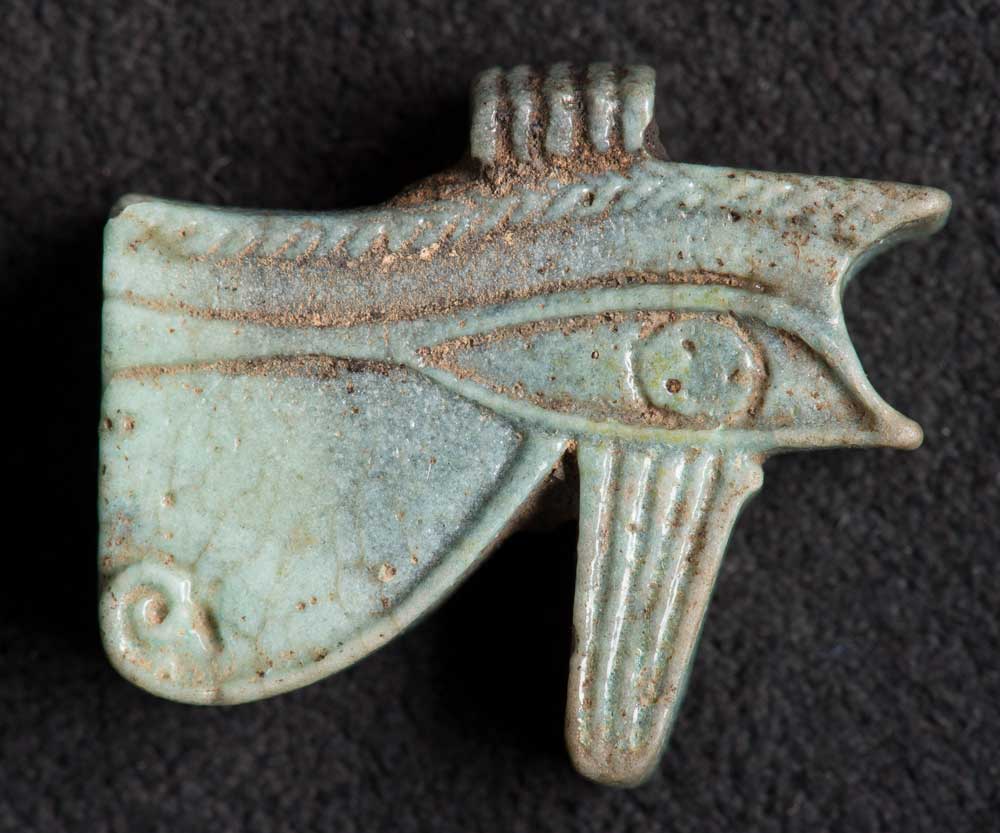 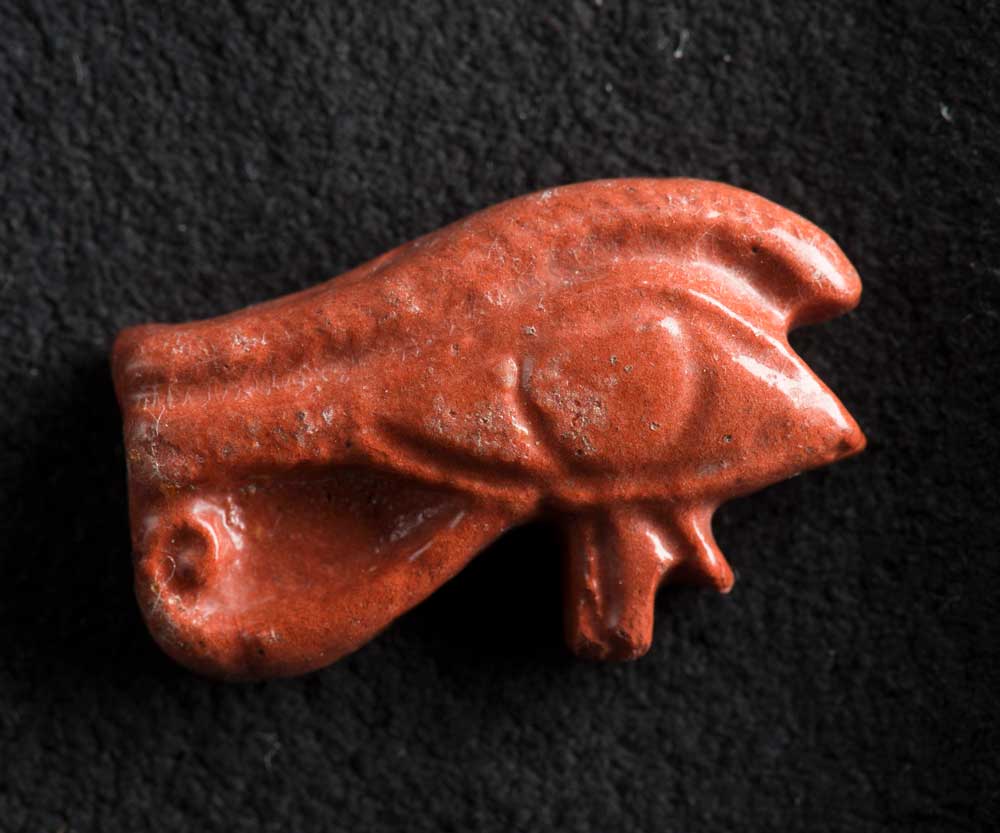