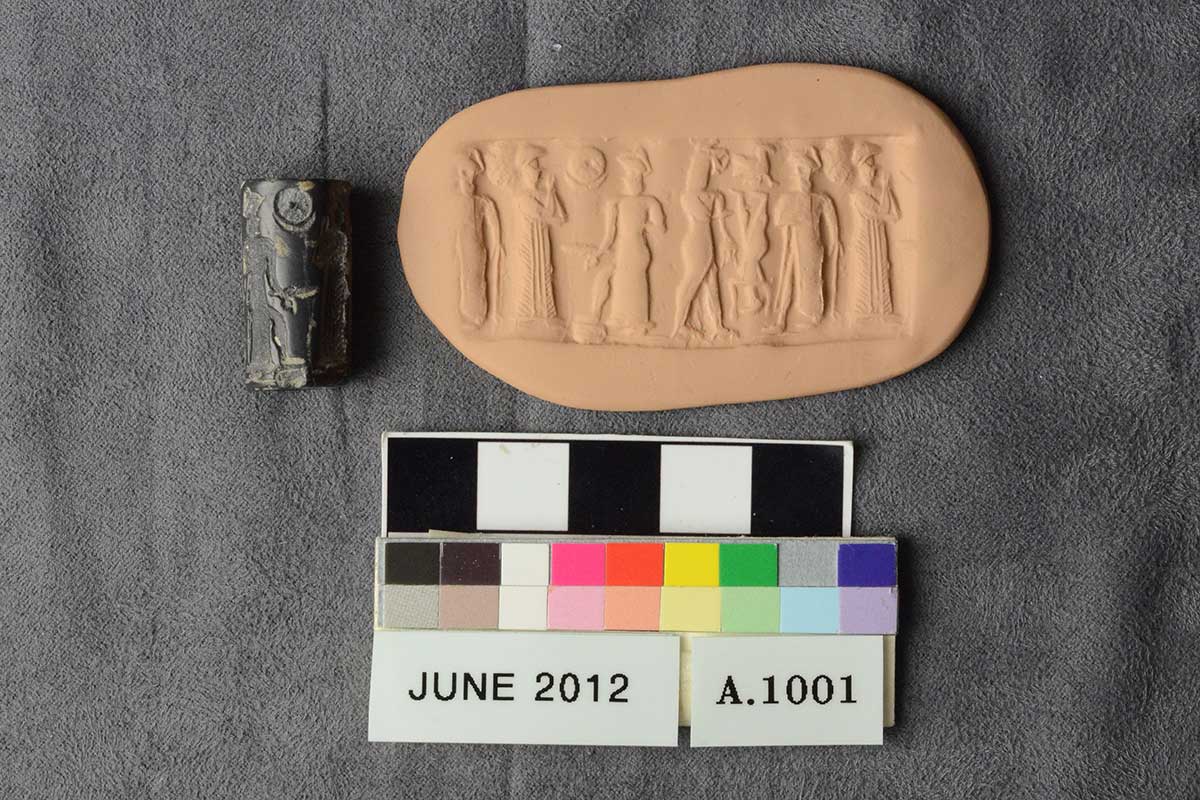 The figures on this seal can be divided into two groups. The first group consists of a robed figure, raising one hand, facing the sun god Šamaš, who holds a saw-toothed knife. Between the two figures is a sun-disc and crescent. The second group of figures consists of a lion-demon, holding an inverted human by the ankles, and a bearded god who holds a scimitar. In the field is a walking bird (or goat-fish?), in profile.

The configurations of figures and motifs on this seal are typical of the Old Babylonian period in Mesopotamia, dating to ca. 2000-1600 B.C.E.

The man with one hand raised is a common figure on Old Babylonian cylinder seal. He is usually depicted in the same position and attire as on this seal, and seems to represent the Mesopotamian king fulfilling his religious duties. The sun god, Šamaš, stands in a position known as “the ascending posture” – extremely common on Old Babylonian seals, both for gods in general and for the sun-god in particular. He is identified as the sun god by his characteristic saw-toothed knife.  The object on which his foot rests is usually understood as a mountain. Both of these features – the knife and the mountain – evoke to the Mesopotamian concept of the sun cutting through the eastern mountains to rise every morning – a connection which is made more explicit in the detailed, 3rd millennium B.C.E. precursors to this seal’s imagery.  In other interpretations, the sun god’s knife may be a symbolic tool for “cutting” decisions – a reference to the Mesopotamian sun god’s capacity as the god of justice.

The lion-demon is a Mesopotamian hybrid monster with a lion’s head, donkey-like ears, a human body, a lion’s tail (here hidden by his kilt), and bird’s talons. He is often, in the Old Babylonian period, shown holding a human victim upside down. The object in his left hand is unclear: his expected weapon in such scenes is a mace, but the object in this seal looks more like a bucket or pail, usually held by priests on Old Babylonian seals. The god with a scimitar is another common figure on Old Babylonian seals. He is sometimes referred to as “the warrior god,” and may represent the Mesopotamian god Nergal, a violent god associated with the underworld, devastation, and disease. It is very common for the lion-demon and the god with a scimitar to be shown together, and it is possible the lion-demon represents one of Nergal’s disease-bringing attendants.

The identification of the creature in the sky is uncertain. It appears similar to some birds shown on 2nd millennium Syrian seals – perhaps to be interpreted as doves.  It also bears some resemblance to a goat-fish, a part-goat, part-fish creature that often appears on Old Babylonian seals.