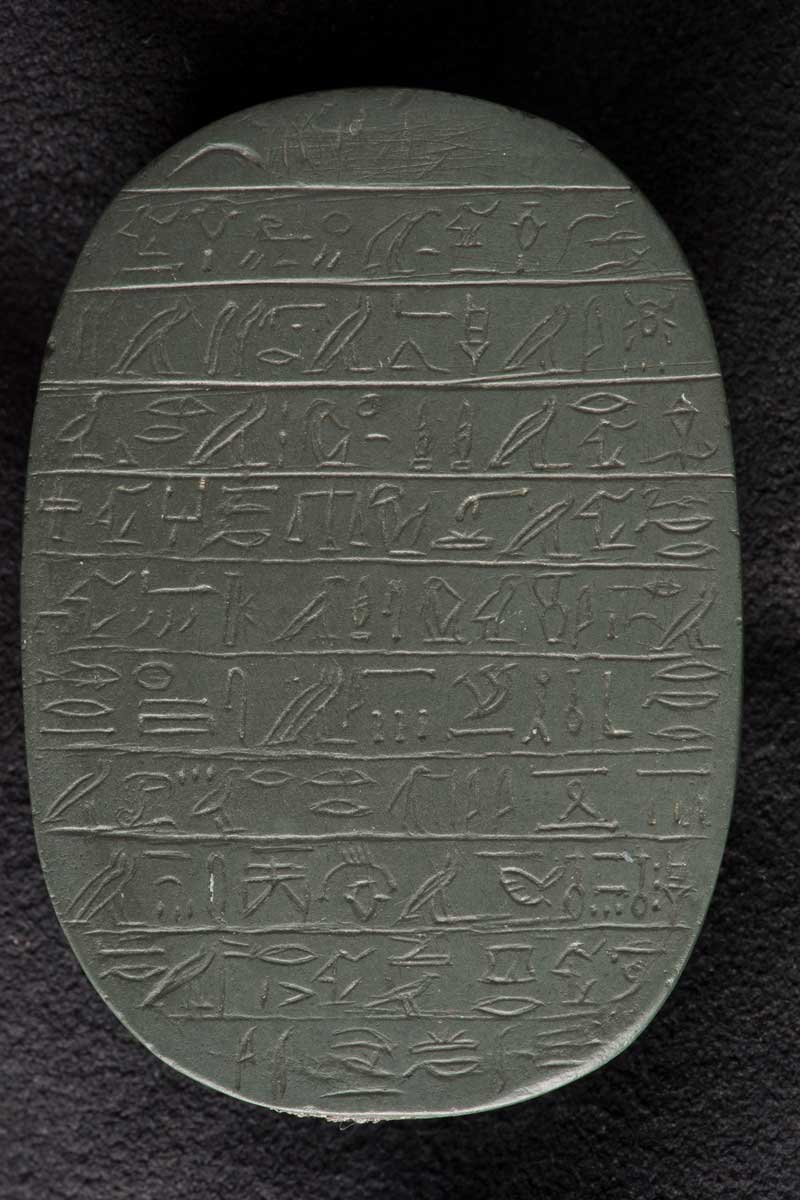 This heart scarab is carved from a piece of dark gray stone. The bottom is divided into eleven horizontal rows, ten of which are inscribed with Book of the Dead spell 30B written in neat hieroglyphs that read from right to left.

The scarab’s association with the daily rebirth of the young sun god, Khepri, gave the beetle a prominent role in funerary contexts. Since the sun was thought to die each night and be reborn each morning as a scarab beetle, the beetle took on significant regenerative powers. It was beneficial to the deceased to harness these powers so he or she could be reborn into the afterlife — in the same way the sun was reborn every morning at dawn.

Scarab amulets’ powers of rebirth and renewal were utilized to aid the dead and they could either be placed in the tomb or within the deceased’s mummy wrappings, particularly atop the heart. The heart was very significant for the ancient Egyptians, as they believed it to be the seat of the mind. When an ancient Egyptian died, it was thought that their heart would be weighed against a feather by the funerary jackal god Anubis before a panel of forty-two judging deities at the threshold of the netherworld. If the heart was lighter than the feather, the deceased would pass to the next life successfully. If it was not, he or she would then be devoured on site by a hybrid hippopotamus monster and cease to exist for eternity.

These funerary scarabs could be inscribed on the bottom with a Book of the Dead spell, usually spell 30b like on 3805; these so-called “heart scarabs” are attested from as early as the Thirteenth Dynasty (ca. 1773-1650 BCE). Book of the Dead spell 30b, titled “Chapter to prevent the heart of the deceased creating opposition to him,” would be said to ensure the deceased’s safe passage into the netherworld. Specifically, it has instructions to help the deceased pass before the weighing of the heart ceremony successfully. Aside from their inscriptions, heart scarabs are easily recognizable due to their large size. 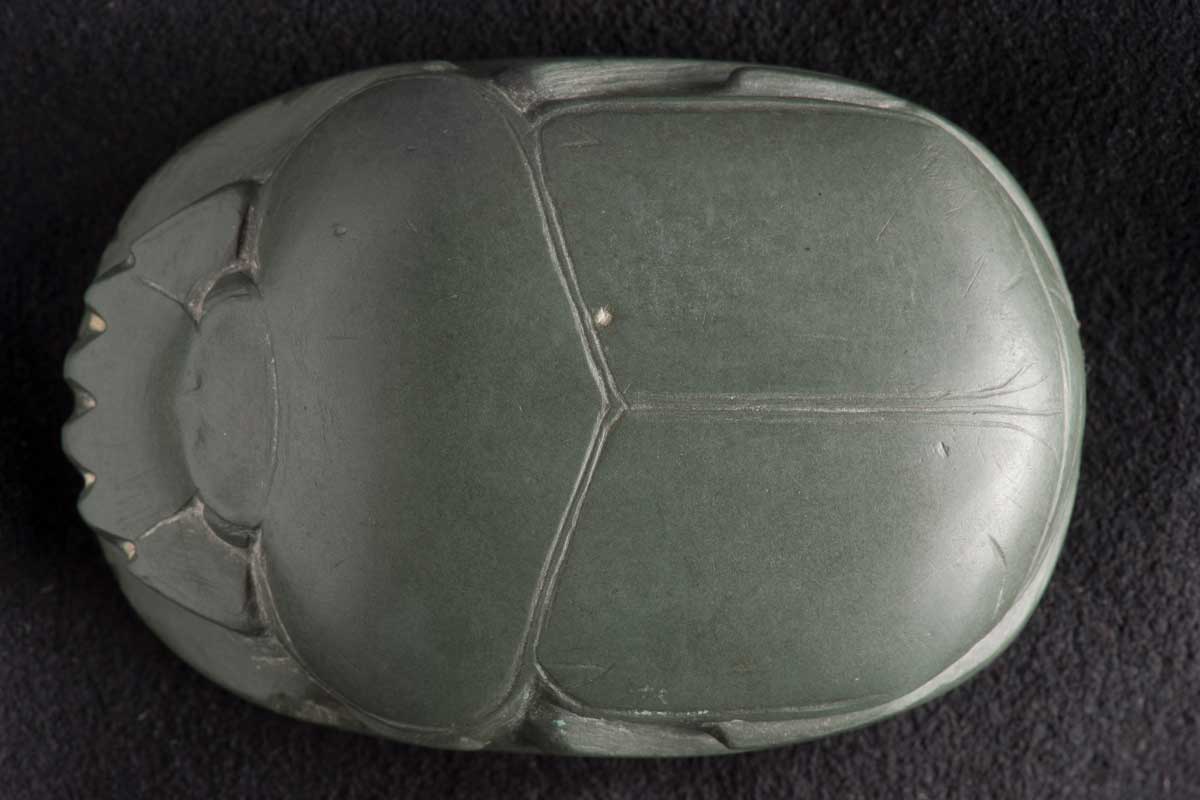 Back of heart scarab. 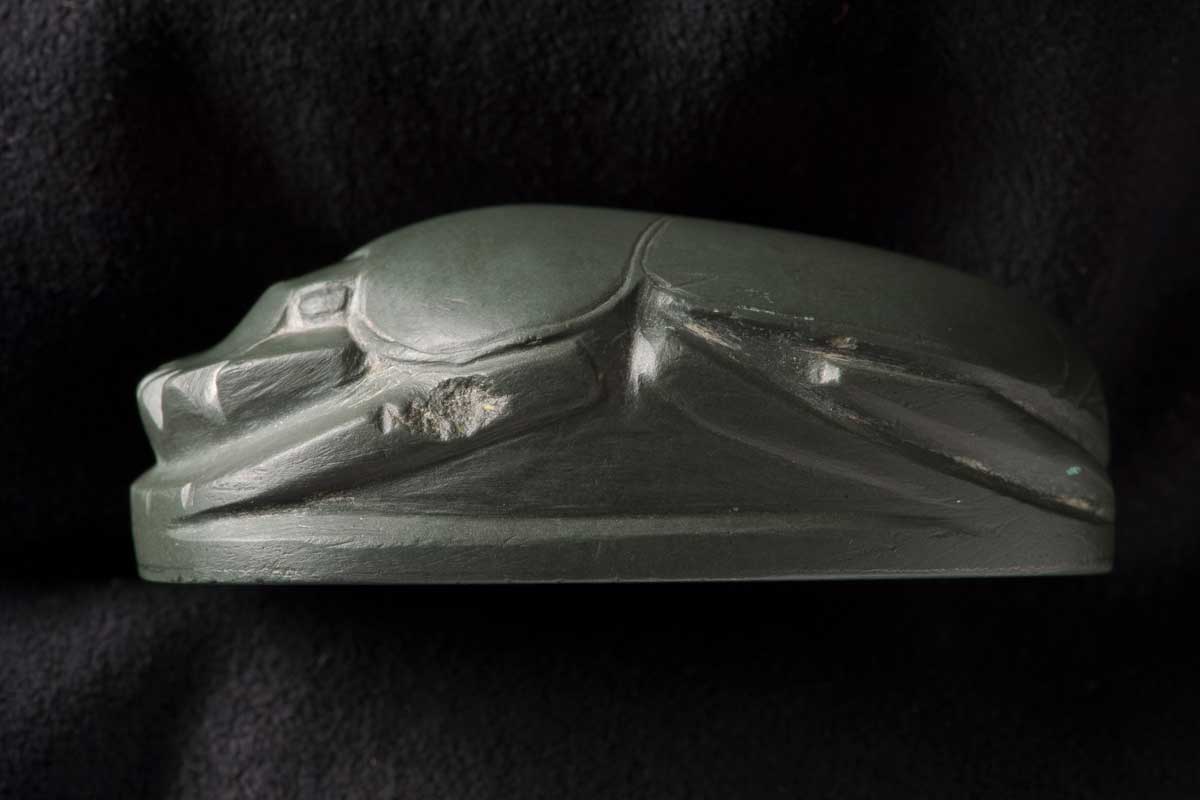 He says: “Oh my heart of [my] mother! Oh my heart of [my] mother! My heart of
my different ages! Do not stand as a witness! Do not
oppose me in the tribunal! Do not show your hostility
against me before the Keeper of the Balance! For you are my ka which is in
my body, the protector who causes my limbs to be healthy! Go forth
(for yourself) to the good place to which we hasten! Do not cause our name to stink
to the entourage who make men in
heaps! What is good for us is good for the judge! May the heart stretch (i.e. be happy) at the verdict! Do not
speak lies in the presence of god! Behold
You are distinguished, existing (as a justified one)!