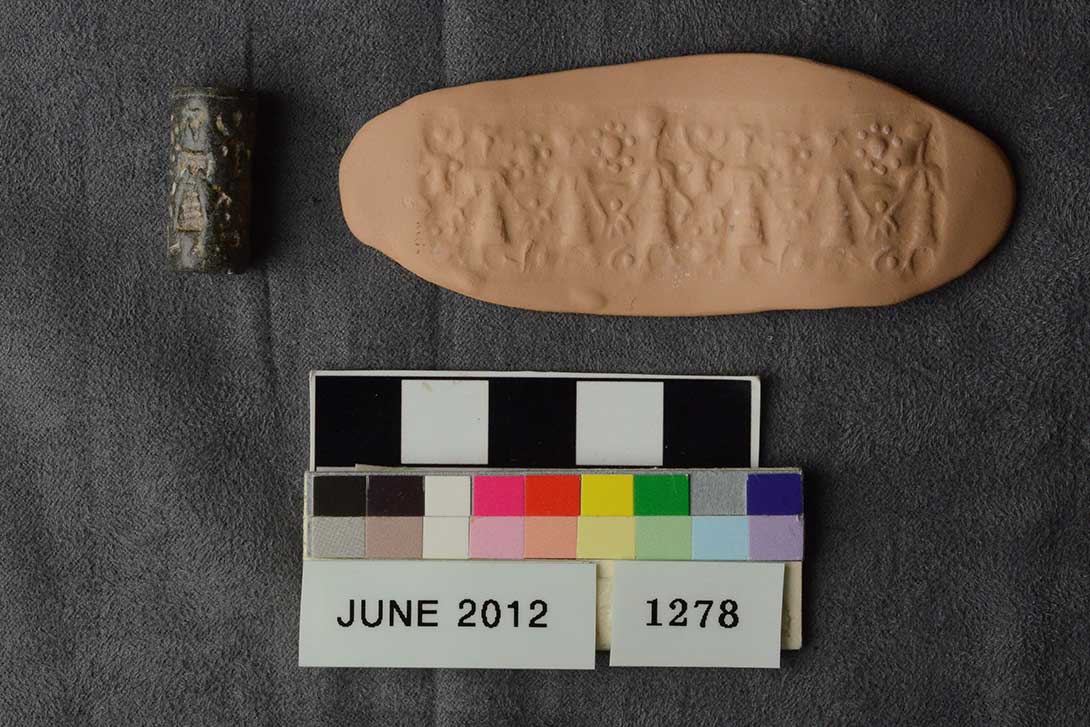 The island of Cyprus, located in the Mediterranean off the coast of Syria, was a major center of trade during the Late Bronze Age, ca. 1450-1050 B.C.E. Cypriot traders traveled all around the Mediterranean world, selling primarily copper in exchange for other commodities. It was during this period that Cypriot craftsmen first produced their own cylinder seals. These seals, and impressions of them, have been found at a number of sites around the Mediterranean world – not only on Cyprus, but also at Ugarit, a major harbor town in northern Syria, and at other trading centers.

In numerous Cypriot seals, human figures are shown with high arches in their feet, and they often have puffed-out cheeks, and/or pincher-like hands. These features can be seen in seals 1278 (above), A.1016, and A.1020, 1279 (below).

A particular style of griffin also appears on a number of Cypriot seals – this creature is shown in seal 1279. Another common element on Cypriot seals is a bull’s head or bucranium, often used as a filling motif. Similarly, bulls paired with lions are a common theme. This is exemplified by seal A.1011.

Another distinctly Cypriot motif is an ox-hide shaped ingot, which appears on seal A.1015. This shape represents the copper ingots that were exported from Cyprus during the Late Bronze Age: actual copper ingots of this shape have been discovered in the remains of ancient shipwrecks off the Syrian coast. Finally, the circle-and-dot design is another very common Cypriot filling motif, and can be seen on seals 1271, 1278, and A.1016.