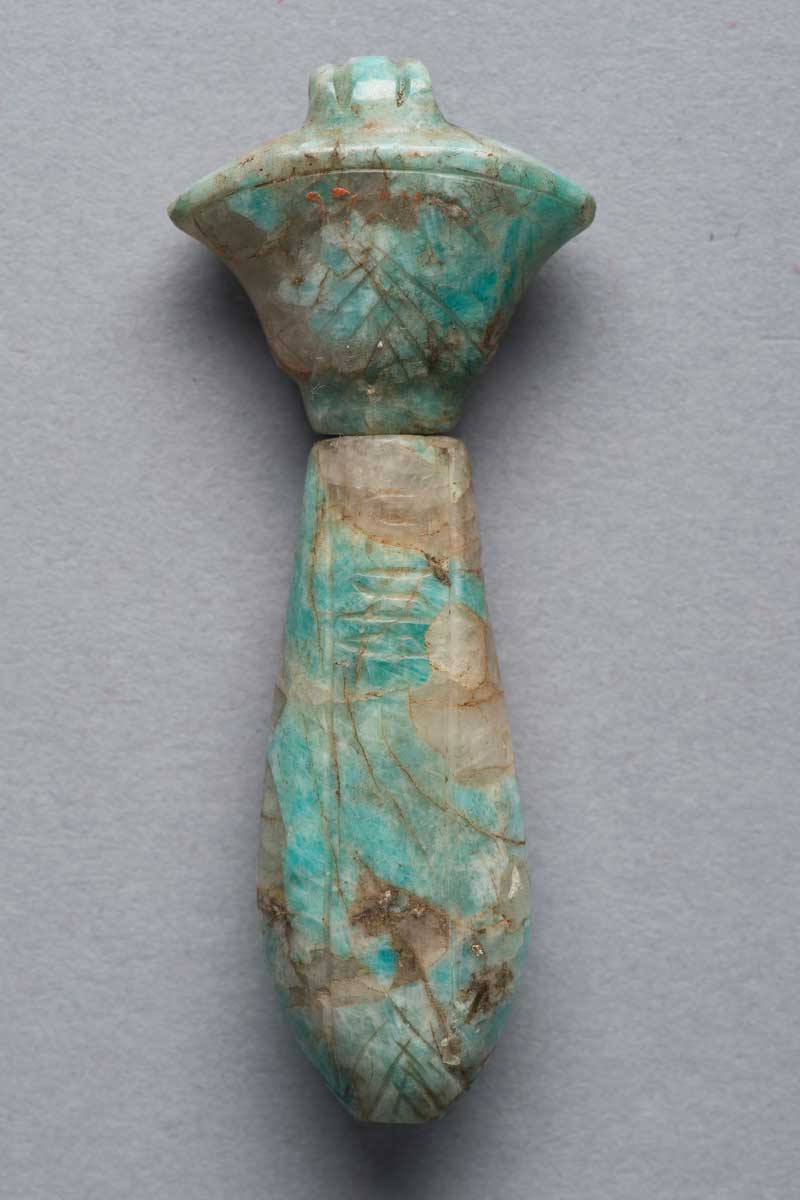 This amulet, made of a turquoise-colored stone, represents a papyrus column. Incised lines on the umbel delineate the leaves, while vertical lines running down the shaft mark off an inscription. Only the beginning of the text, which is faintly inscribed, is preserved. It reads: “Words spoken by…,” a phrase traditionally used at the beginning of spells. A suspension loop has been carved at the top of the amulet.

Today the papyrus plant is best known as the material from which the ancient Egyptians produced the paper-like writing material that we call papyrus. For the ancient Egyptians, however, the plant, known to them by the name of wadj, had a much wider value, being intricately linked with concepts of growth and rejuvenation. As a result of these potent connections, as well as the plant’s strong associations with Lower (northern) Egypt for which it was the iconic plant, symbolism incorporating the shape of the papyrus plant can often be found in other contexts, such as in papyriform columns made of stone utilized as architectural elements, or as scepters carried by deities.

Amulets depicting a papyrus column or scepter are found during the New Kingdom and Third Intermediate Period (ca. 1550-664 BCE), but become particularly popular during the 26th Dynasty (ca. 664-525 BCE). They take two main forms: either as a papyrus column shaped in the round, as with JHUAM 3724, or as a rectangular plaque with one or two papyrus columns rendered on the front in raised relief. References to the wadj-amulet can be found already in the Coffin Texts, a corpus of funerary spells designed to help the deceased successfully pass into the afterlife dating to the Middle Kingdom (ca. 2055-1650 BCE), where the deceased states that the amulet is at his or her throat in Spell 106. The importance of the papyrus column amulet is expounded upon in the Book of the Dead, where Spells 159 and 160 deal with the prescription of a papyrus column amulet to be made of green feldspar and placed at the throat of the deceased — if the amulet remains intact, the deceased will be healthy and uninjured. Papyrus column amulets have been found in a variety of materials, but are most often made of green stones, as here, or of blue-green faience, the Egyptian word for the colors blue and green also being wadj, thus strengthening the rejuvenative powers of the amulet.