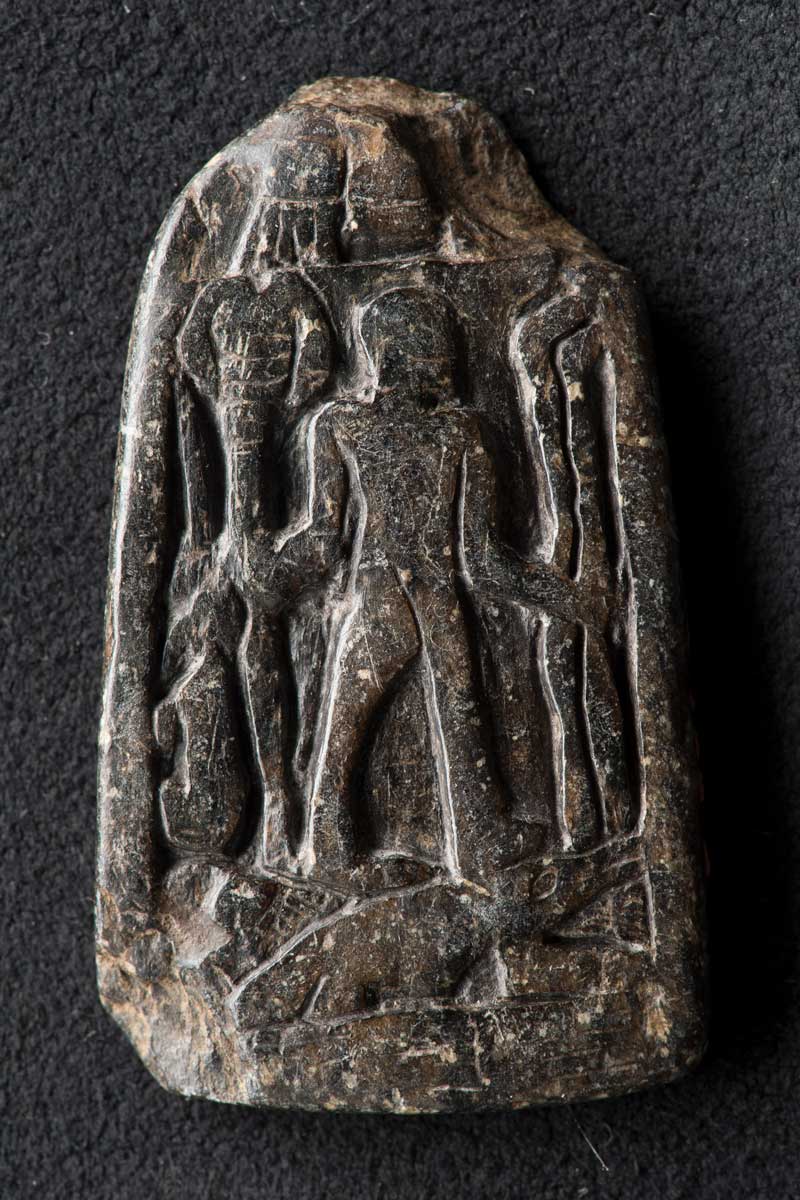 This steatite cippus amulet takes the form of a small round-topped stela and is decorated on both sides. The front shows Horus-the-Child standing on the backs of two crocodiles. In his hands, the young deity grasps snakes, a scorpion and an antelope. The reverse contains four columns of incised hieroglyphic inscription.

The stele of Horus, also known as cippi (singular cippus) of Horus or “Horus on the Crocodiles,” are a particular type of healing and protective statue that appeared in Egypt during the 18th Dynasty (ca. 1550-1295 BCE) and were in use until the Roman Period. They are characterized by a central representation of the god Horus as a young boy, holding in his hands a series of wild and dangerous animals such as snakes, scorpions, antelopes and lions, and standing on two or more crocodiles. He is normally naked and has the lock of youth on one side of his head. Horus appears in this very form on this amulet, surmounting two crocodiles and grasping a giant scorpion and gazelle in his right hand and two snakes in his left hand. Directly above Horus it is typical to see the head of the demon-god Bes, who was the protector of infants, pregnant women and childbirth, like on this amulet. In some cases, the whole cippus-stela is meant to represent the body of Bes, containing and guarding Horus. Here, the traditional stela statue form is adapted into an amuletic one for portable use.

On the base, sides and back, these cippi characteristically have protective spells carved in hieroglyphs. The texts allude to the legend of Osiris and Horus, and are meant to protect against and cure injuries made by the dangerous animals represented on the stele. These texts generally consist in two spells, which Egyptologists call Text A and Text B. The magical power of the texts was transferred by pouring water over the inscriptions and collecting it in a bowl, which a person would drink in order to “fill his body with Heka (magic)” and thereby heal him or her. A portable amulet such as this one would be immersed in water and that water would then be consumed ritually. The small amulets could also transfer their power by kissing or rubbing them, and this is the reason why their surface is in many cases worn out.

On the back of this particular amulet, its flat surface has been divided in four columns by somewhat clumsy lines, which frame an inscription in cursive hieroglyphs. The text of the inscription has recognizable signs, but does not make continuous sense, although some sections of Text A can be identified among the groups of signs. The reason for this is that the inscription was necessarily not important because of what it said, since it was not meant to be read (and it is very possible that the owner of the amulet was not able to read), but just for the fact of being there, since its hieroglyphs were magically powerful in themselves.

Most of these stele lack a known provenance, which makes their dating a tricky issue. The amulet-stela 2231 D has many parallels with other amulets that were classified by Egyptologist Heike Sternberg-El Hotabi as “Workshop II.” Though there has been a considerable amount of discussion surrounding the date of this workshop, the most reasonable suggestion places the date between the 26th and 29th Dynasties (ca. 664-380 BCE). Therefore, according to this information, a provisional dating for the amulet-stela 2231 D would be between the 26th and 29th Dynasties.