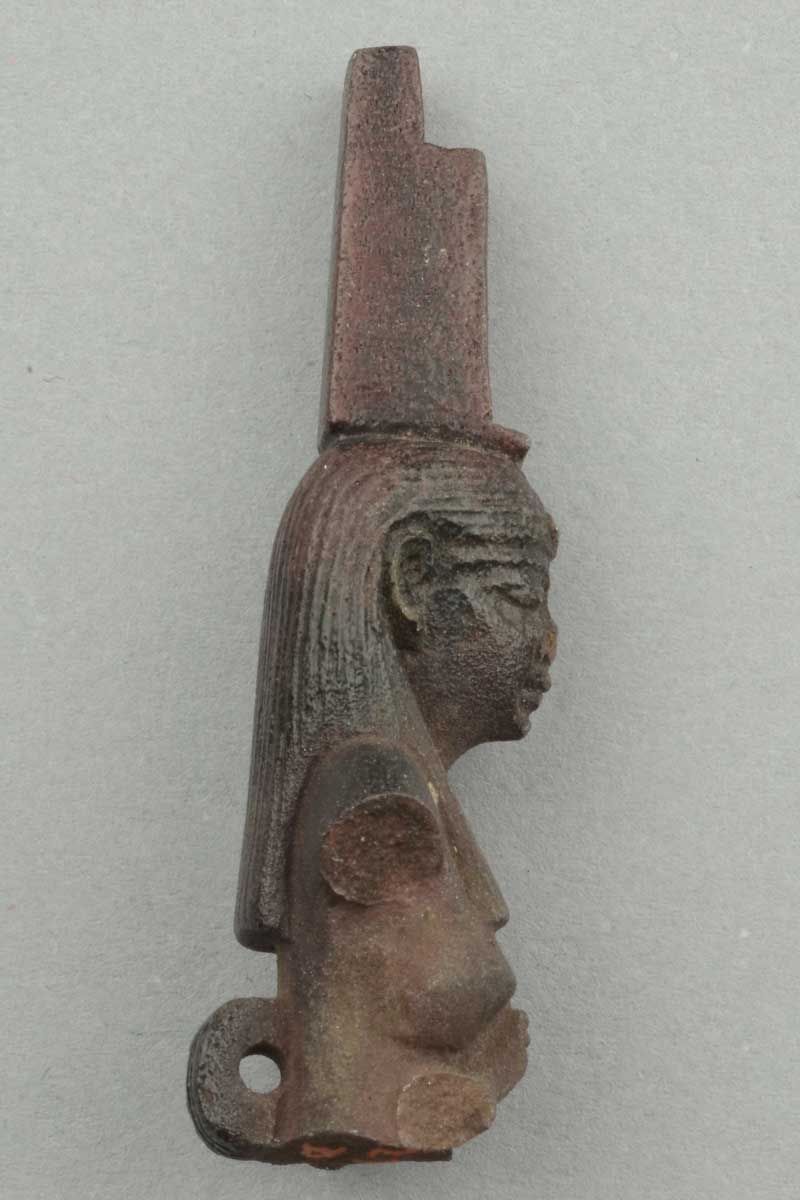 This amulet, made of a dark red faience, once depicted the goddess Isis nursing her son Horus. The amulet has been broken at the goddess’s waist, preserving only the upper part of her body. Isis, identified by the throne hieroglyph atop her head, wears a tripartite wig. Her right arm, now mostly missing, was once bent across her abdomen, with her right hand rising to offer her left breast to her son, who would have once been seated in her lap. A suspension loop decorated with vertical ridges appears on the amulet’s back, just above the goddess’ waist.

The goddess Isis was perhaps the most important goddess in the Egyptian pantheon. She was primarily a maternal goddess of magic. Amulets of Isis were extremely common, and by the Late Period (ca. 664-332 BCE), they could be found on almost every mummy. One of Isis’s most popular amuletic forms was as a lactating woman, nursing her son, Horus-the-Child, the god of divine kingship. Though this amulet is broken, Isis was almost certainly depicted seated on a throne with the infant Horus on her lap. In comparable amulets, Isis (or a similar goddess) is shown with her proper right hand grasping her breast and her left hand cradling her child’s head. In this particular case, the goddess can be certainly identified as Isis, as her headdress, the throne, is the hieroglyphic sign for Isis’s name.

These amulets could be used in a phylactic (protective) manner, invoking Isis’s maternal protection, or as objects to induce fecundity, invoking the goddess’s fertility. Naturally, these could be used by either living mothers to protect themselves and their children or by the deceased for protection and regeneration in the afterlife. Amulets of this type gained widespread popularity in the Third Intermediate Period (ca. 1069-664 BCE).