King with a Mace 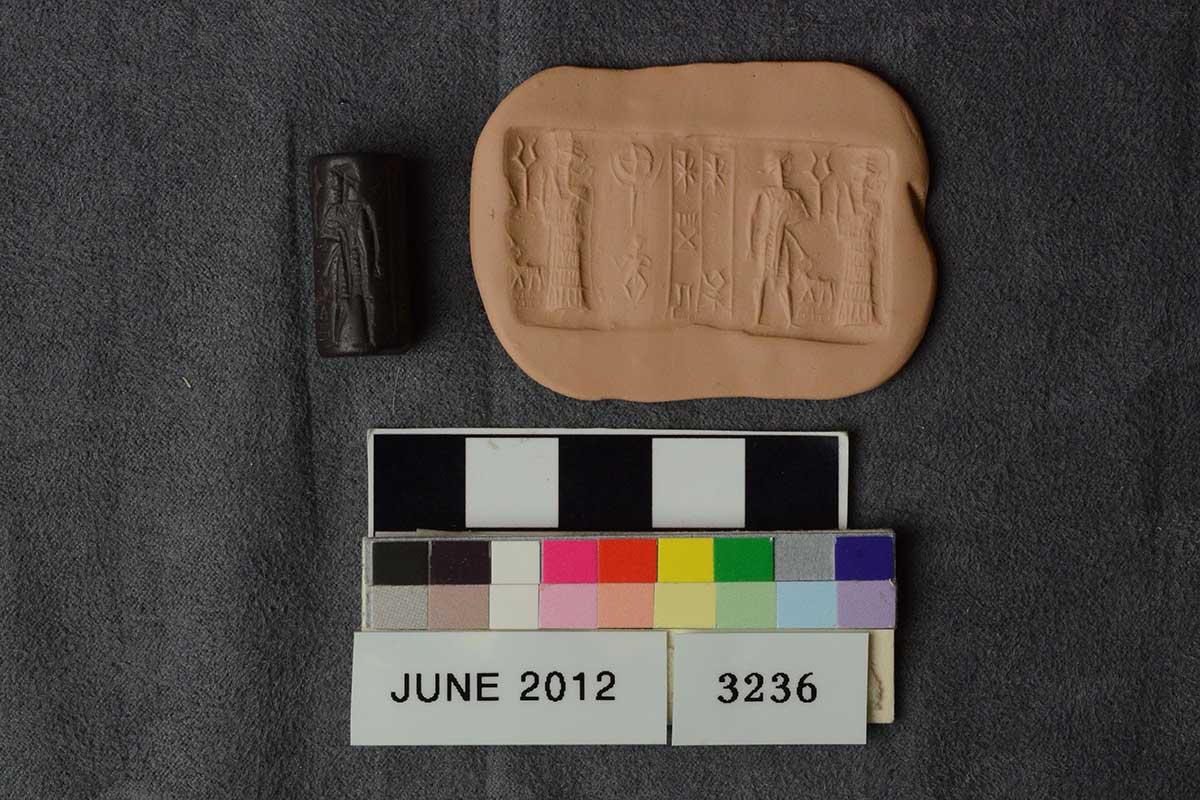 A bearded, kilted figure, holding a mace, stands facing a suppliant goddess. The goddess wears a flounced robe and a multi-horned headpiece, with a necklace counterweight hanging down her back.  In the space between the figures are a double lightning fork, a bull standing on a dais, a sun-disc and crescent standard, and a “bow-legged dwarf.” An inscription, written in cuneiform, reads dIŠKUR // dša-la.

The scene depicted on this seal was a very popular theme for seals of the Old Babylonian period ca. 1900 – 1600 B.C.E.  The first figure is commonly referred to (in modern literature) as the “king with a mace,” although his identity as king is not certain. He almost always appears in the position he holds here, dressed in similar attire, and with his beard arranged in the same fashion. The hat worn by this figure is the “cap-and-turban” (or cap-with-wide-brim) usually worn by the king in Mesopotamian art. This, coupled with the fact that Mesopotamian deities are usually depicted with horned headpieces, points in favor of identifying this figure as a human king. If this is the case, he likely stands for the concept of kingship, with an emphasis on the active, warrior role, rather than representing specific ruler.  Despite the absence of a horned hat, the “king with a mace” has sometimes been identified with a god (especially in earlier scholarship).

The second figure in this popular scene is the “suppliant goddess,” who often played an intercessory role for worshipers approaching major gods or goddesses. Here, however, and in other scenes of this type, she appears to be worshiping or serving the kilted figure.

The “bow-legged dwarf” is a common motif on seals of the Old Babylonian period. He is always naked and ithyphallic, wears the distinctive cap or hairstyle shown on this seal, and is usually diminutive. He often stands in positions suggestive of dance, and has sometimes been interpreted as an entertainer or as a dancer in rituals. Other interpretations take the “bow-legged dwarf” as a prankster demon or a protective spirit. His presence on Old Babylonian cylinder seals does not seem to represent a specific Mesopotamian deity, although he has sometimes been associated with the Egyptian dwarf god Bes.

The other filling motifs on this seal – astral symbols and a lightning fork – are all common features of seals depicting the “king with a mace” and the suppliant goddess. The sun-disc and crescent standard represent the Babylonian sun god Šamaš and the moon god Sîn. The lightning fork represents the storm god Adad, whose name also appears in this seal’s inscription. The bull is another storm god symbol, often appearing underneath the lightning bolt. Both frequently occur on seals bearing Adad’s name.

The inscription consists of two divine names: Adad (written IŠKUR), the storm god, and Šala, his consort. This pair is commonly invoked in Old Babylonian seals inscriptions. The practice of inscribing a deity’s name on one’s seal was one of the ways (along with depicting deities or showing their symbols) seal owners sought to ensure benevolence from that deity.