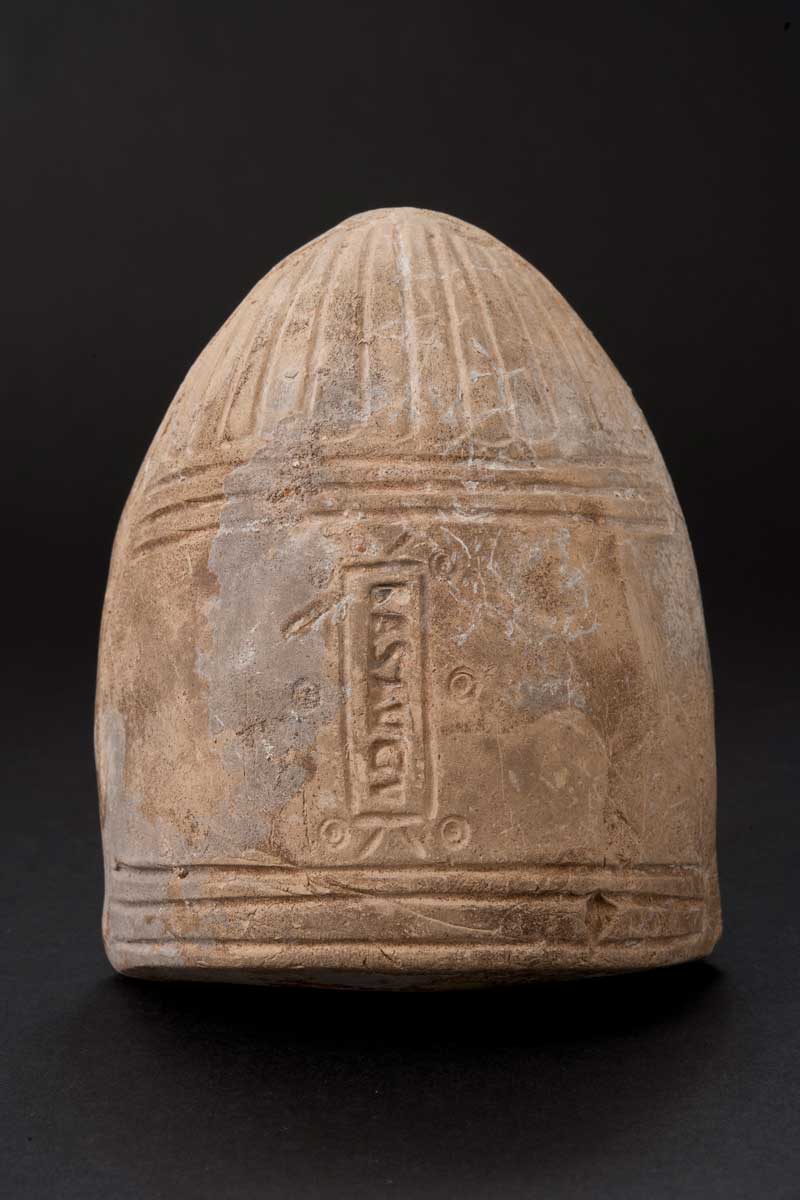 On the front, we see a coin slot, beneath which there is an aedicula composed of two spiral columns without capitals. These columns support a pediment decorated with a cable pattern along its roof line and a patera in its tympanum. Below this structure, viewers are drawn to the frontal image of Mercury, who stands atop the grooved base of the aedicula. He wears a short-sleeved, belted tunic, boots, and a winged cap. He holds a caduceus in his left hand, and a moneybag in his right. A lamb is shown on the god’s right. The scene is framed by groundlines, which are indicated by three horizontal grooves at the base of the bank.

On the back, we see thirteen radiating tongues, which create a dome-like structure. Beneath this dome-like structure, we find the marker’s mark (BASAUGU) stamped in a rectangular box between two vertical rows of stamped dot-and-circle motifs and two horizontal rows of oblique grooves, bounded above and below by three horizontal incisions.

Twenty or so examples of Roman terracotta savings banks have been found to date. These banks are usually adorned with images of Mercury, Venus, Fortuna, and charioteers. The typical design shows a central figure standing beneath an aedicula, composed of two or four columns. Roman terracotta banks also vary in size and shape. Some examples take the form of a chest or arca. Others, like the bank in the JHUAM, resemble a beehive. Banks in the shape of lamps and pots have also been found. The earliest examples of such terracotta banks date to the first century C.E. Based on the style of its twisted columns and the frontality of Mercury’s image, the savings bank in the JHUAM is dated to the second century C.E. A similar terracotta savings bank found in Ostia, and dated to the reign of Commodus (C.E. 180-192) confirms this attribution. Like lamps, savings banks, were often given as New Year’s gifts during the Roman Empire. Most of the surviving examples come, however, from graves dedicated to children and young women.

The marker’s mark stamped on the reverse, BASAUGU, is an abbreviation of the genitive form of the potter’s name, which may have been Bassienus, Bassenius, or Passienus Augurinus. Furthermore, the stamp of BASAUGU is documented on at least one other beehive-shaped bank. Identical maker’s marks and similar decorative patterns, possibly made from molds, appear on a number of differently shaped banks, suggesting that ancient workshops produced a variety of these products for their customers. Stamps, like that of BASAUGU, show that terracotta banks were often made in the same workshops that manufactured clay oil lamps.

The appearance of Roman beehive-shaped banks recalls that of Mycenaean tombs (tholoi). These richly furnished, domed tholoi functioned as repositories for valuable goods, dedicated to the dead. In fact, Pausanias, writing in the second century C.E., described Mycenaean tholoi as thesauroi, “treasuries.” (9.38.2-3). This association between tholoi and thesauroi might explain the choice of a beehive shape for Roman terracotta savings banks. The incorporation of images of Mercury and Fortuna on Roman beehive banks is also appropriate for a gift of goodwill. Given his constant mobility and other intellectual gifts, Mercury was considered the god of commerce and social intercourse, and as such his appearance in the decoration of beehive savings banks is highly appropriate.