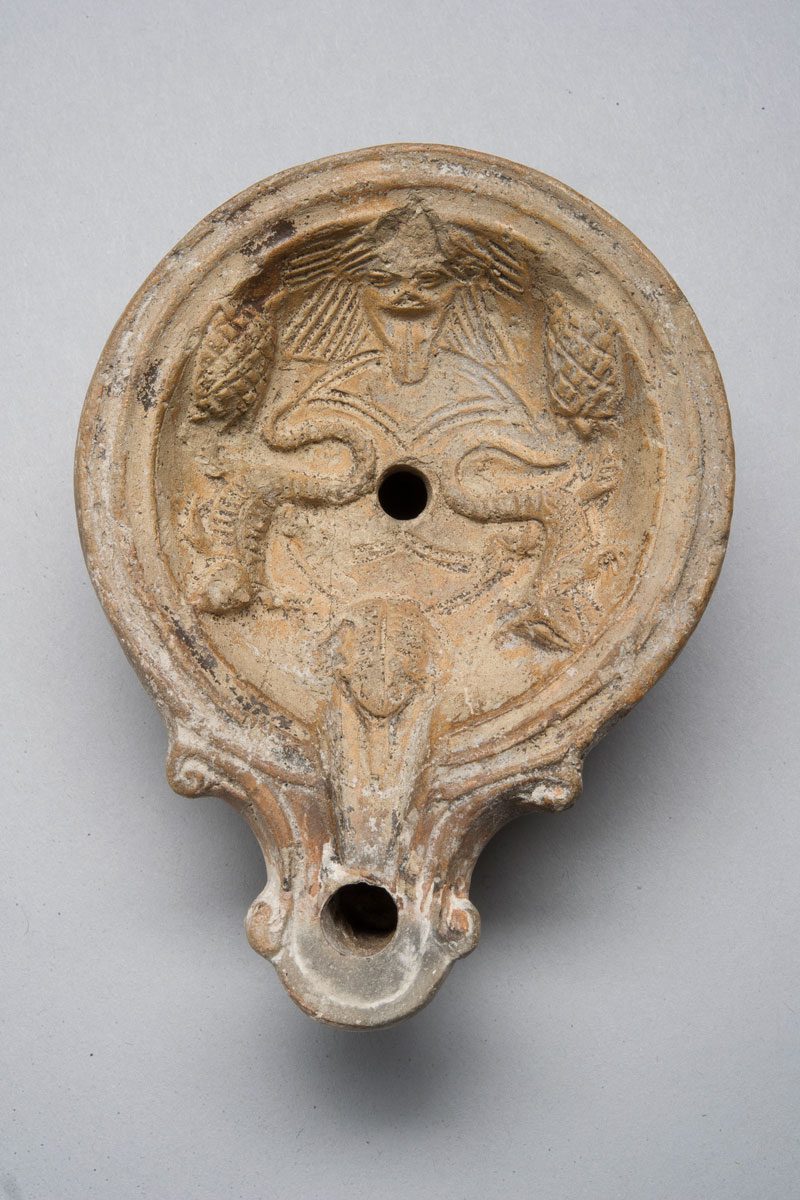 Lamp with apotropaic symbols against the evil eye, JHAM HT 774.

In antiquity, lamps were a common source of artificial light in private and public spaces, even though torches were probably the preferred choice for large open areas. Lamps could also serve as votive offerings in shrines and burials.

While lamps could be made of either metal or clay, the latter was the most popular material, due to its versatility and moderate cost. In most cases, terracotta lamps were produced in workshops using two-piece plaster molds. These mass-produced objects were then commercially distributed on a regional scale. After the first century CE, lamps made in Italy began to be exported to different regions of the Empire. But by the second century CE, local lamp makers in the provinces started copying Italian models—a development that once again limited the export of lamps from the Italian peninsula.

The lamps in this collection, dated between the second century BCE and the second century CE, represent a common type. In these examples, a central discus contains the main decoration and the filling hole, where a wick would have been inserted to create a small flame. Lamps had one or more nozzles through which oxygen flowed, allowing the wick to burn for continued illumination. Since the most common type of fuel used for lighting was olive oil, only regions with an oil surplus could afford to use this type of lamps. This explains why fewer lamps have been found in regions, such as Britain, that had to import olive oil from abroad.

Sometimes, lamps feature an inscription that records either the maker’s or the owner’s name.  Inscriptions on lamps also often preserve the text of votive dedications. The maker’s signature is the most usual type of inscription found of these objects.  It served both as a trademark and as a form of advertisement. One of the lamps in this collection (HT 321) is a good example of this practice. It was made by the potter Faustus, an itinerant artisan whose lamps were sold in Italy, Cyprus, Asia Minor and Egypt. The different find spots for Faustus’ lamps suggest that he himself traveled around the Mediterranean, establishing workshops in the locations mentioned above.

The variety of motifs found on the lamps featured in this section of the exhibition reflects the range of imagery characteristic of Roman domestic décor, such as mythology, the world of agricultural production, and everyday life.