Travis Schmauss draws a tondo with a compass as Ross Brendle and Haley Huang look on. Image courtesy of Will Kirk, Homewood Photography.

The readings for this class and our guest lecturer, Professor Ilaria Cianchetta, conservation scientist at the Getty Conservation Institute, delved into the chemistry of slip and firing in an effort to better understand the ancient technique and process. After over a century of scholarship asserting a single, three-stage, firing process for Attic red-figure ceramics, recent advanced chemical and visual analyses and replication studies have suggested the practice of multiple firings for different stages of painting slip. Iron is the key colorant of red and black figure vessels, and is present in different oxidation states which give the fired ceramics their characteristic colors. Reds are related to the presence of hematite [α-Fe3+2O3] or maghemite[γ-Fe3+ 2O3] while the black areas are due to the presence of hercynite [Fe2+Al2O4] and magnetite [Fe2+Fe3+ 2O4]. The areas on red-figure vessels which turn black area are painted with slip, a refined clay extracted from the natural clay body by a levigation process. When a clay vessel painted with slip is fired in a kiln in the presence of oxygen to approximately 800 degrees Celsius, the entire pot turns red. When the temperature is raised further, nearing 1000 degrees Celsius and the oxygen is removed from the kiln through the addition of organic material (damp branches or sticks) to create a smoky environment, the entire pot turns black. At this point, the areas painted with slip begin to vitrify, and the slip layers form a glassy matrix that is less porous than the clay body that is not painted with slip. In the final firing phase, as oxygen is allowed back into the kiln as it cools, oxygen penetrates into the more porous areas of the vessel—namely the unpainted areas—turning the unpainted areas back into the red, but leaving the vitrified areas black.

Cianchetta discussed the variety of analytical tools she utilizes to identify the different compositions and minerals of the clay, revealing more about the effects of firing on slip and clay bodies. In addition to testing samples of Attic pottery using x-ray fluorescence, Raman spectroscopy, and x-ray absorption, Cianchetta has also attempted to replicate the slipping and firing process in an effort to recreate comparable results to the originals. (See Cianchetta, Ilaria, et al. “Investigating the Firing Protocol of Athenian Potter Production: a Raman and Hi-Resolution TEM study.” Microscopy and Microanalysis 20 (Suppl 3), 2014: 2038-39.1).  But there is still more yet to learn; Cianchetta even posed a question for us for when we fire our vessels in the coming weeks—she asked us to look for evidence of a flame inside the kiln during the re-oxidation phase of the firing which would account for the more vitrified upper areas of the black slip, relative to the ceramic surface. 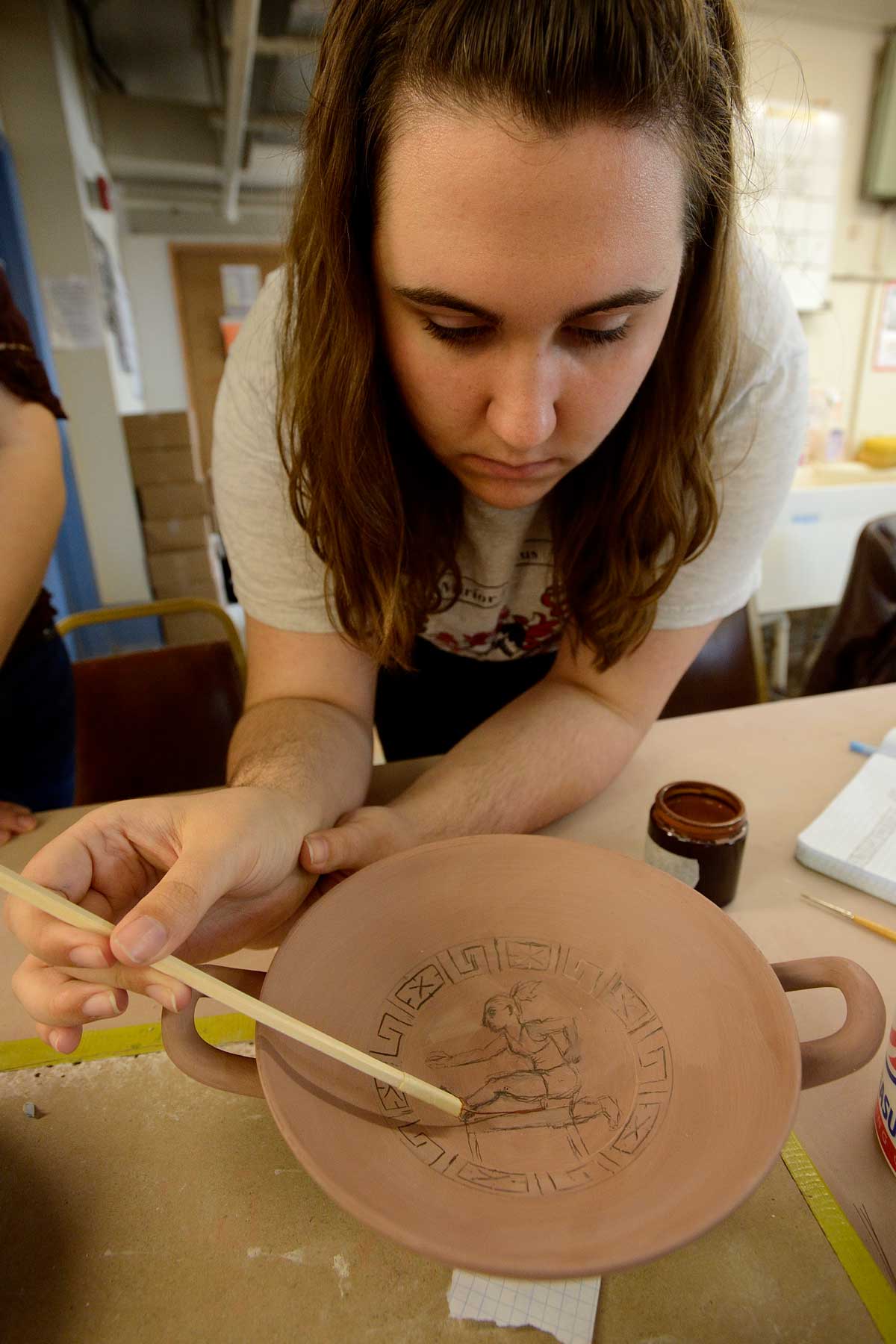 Elizabeth Winkelhoff uses a linierhaar brush to begin painting the relief lines on her group’s cup. Image courtesy of Will Kirk, Homewood Photography.

Following our discussion with Professor Cianchetta, the groups quickly got to work collecting their cups and beginning the process of transferring images with slip onto our respective vessels. We attempted to stay as true to the ancient techniques and tools as possible. A compass assisted in marking the circular tondo on the inside of the cup where the main image would be placed. Then, the design was drawn with charcoal as a guide for painting the relief lines. A linierhaar brush, made with 2-3 horse hairs or cat whiskers, laid down the relief lines that compose the outline and details of the figure; the slip needed for the relief lines is a pasty consistency in order to adhere to the hairs and to stick to the surface. By contrast, small round brushes could be used for the broader, more rounded contour lines that go around the outlined figures, and also for the geometric Greek key pattern surrounding the image. It was interesting to see the variety in images and organization of labor. Every design needed to include a figure, a pattern, and inscriptions inspired by those of ancient kylikes but with a contemporary spin. For two of the groups, this meant rectifying the absence of women in ancient Greek contexts like athletics and scholarship. The groups, consisting of 3-4 people, found ways of collaborating and organizing labor to be most efficient. While one person could draw the figure, another the pattern. Two or even three painters applied slip simultaneously. One can imagine and appreciate the efficiency of an organized workshop of potters and apprentices after attempting the painting process in small groups. Every step in this process reveals more and more just how reliant the production of the kylix relies on the organization of the workshop, its apprentices and most experienced craftspeople.