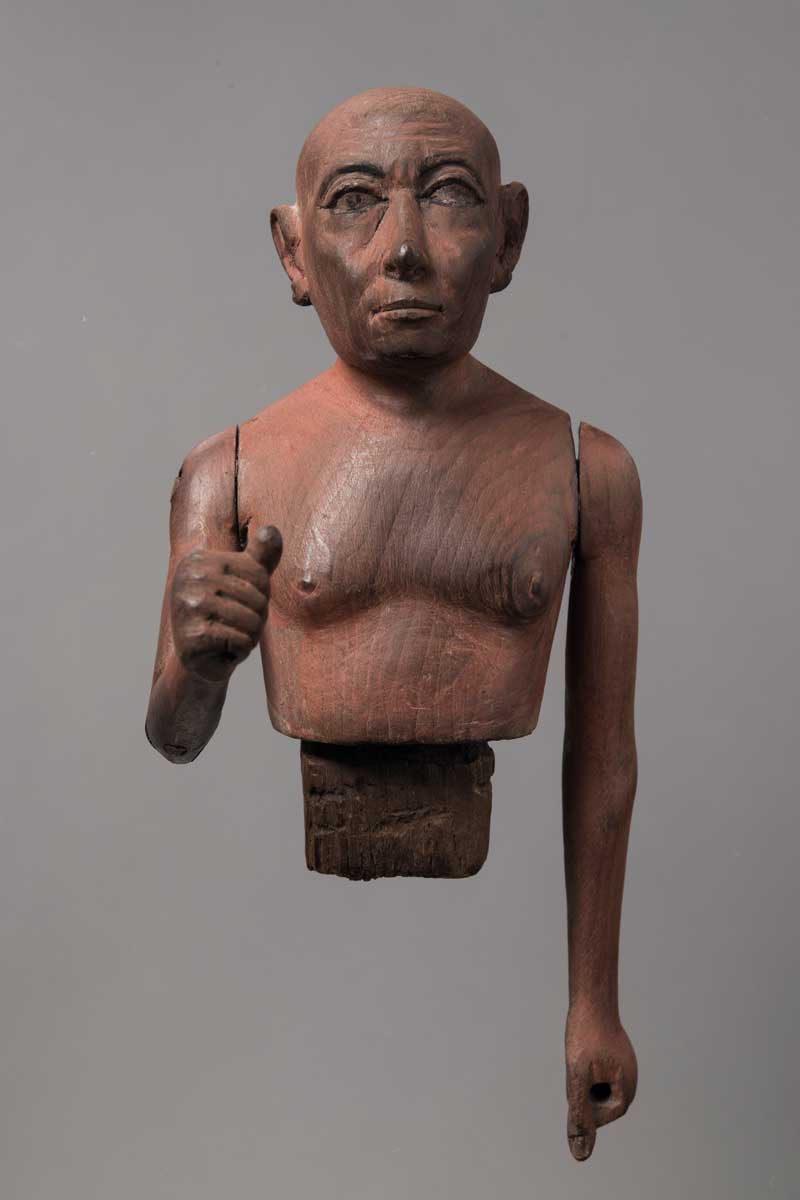 Though not part of this exhibition, this upper part of a composite statue was also the subject of recent study and technical analysis. The statue depicts a man from the waist up, with a square tenon for attachment to his lower body protruding from his torso. His arms are likewise formed from separate pieces of wood. The man is bald with exquisitely carved facial features. Two vertical creases run across his brow, suggesting this is not an idealized, youthful Egyptian, but rather a mature man of social standing. Black cosmetic lines outline his almond-shaped eyes with pointed inner and outer canthi, while his pupils are likewise picked out in black contrasting with the white of his eyes. His knowing eyes are hooded, with a curved crease above. His naturalistic eyebrows are rendered in black, while beneath his eyes heavy bags accented by furrows on either side of the nose add to his overall worn appearance. His cheeks appear somewhat hollow, and his lips are pursed in a straight line and drilled at the corners. His strong chin is square and well-formed. On the sides of his face, his ears appear overly large, as is common on other statues dating to this period. Contrasting the somewhat aged appearance of his face, the man’s torso is taught and youthful, with a groove underlining his pectoral muscles. The figure’s proper left arm is held down at his side, while his proper right bends at a right angle near his waist. Both hands are clenched in a fist that has been drilled through the center, likely to hold implements which have since been lost. The overall impression of this strikingly human portrait is one of experienced maturity.

An x-ray showing the holes drilled into the body for the dowels in the arms to be slotted in. On loan from Eton College Myers Collection, ECM 1474

X-radiography of this object provided evidence of exciting new discoveries about this funerary sculpture. First, it was clear that the still movable arms of the figure are attached to the body using fine wooden dowels. In the case of the proper right arm, the hole for the dowel was apparently drilled twice because the first drill hole did not hold the arm in the proper orientation. Another fascinating discovery further investigated by undergraduates Sean Galvin and Kevin Li was the presence of a dense, radio-opaque material that appears as white on the figure’s fingernails. Under the stereomicroscope, they determined that the fingernails appeared to be painted yellow. Using x-ray fluorescence analysis, this yellow as identified as containing arsenic, suggesting that the fingernails were painted with the arsenical yellow known as orpiment. Perhaps these fingernails were originally intended to be understood as golden in color, but the effort taken to add this tiny detail underscores its tremendously high quality of carving and painting.

This upper part of a funerary statue would have slotted into a lower part which presumably was plastered and painted as finely as this is. The wood is smoothly finished with very few tool marks remaining on the (originally exposed) surface. The red coloration visible on the overall surface appears to be an iron-based pigment, while the eyebrows, outlines of the eyes and pupils were all painted in carbon black. A concentration of Egyptian blue pigment particles around the eyes (visible only when the object is imaged in visible infrared luminescence) suggests that the white plaster/pigment of the eyes were perhaps mixed with small amounts of Egyptian blue to “punch up” the white hue of the eyes, a technique commonly used in antiquity. 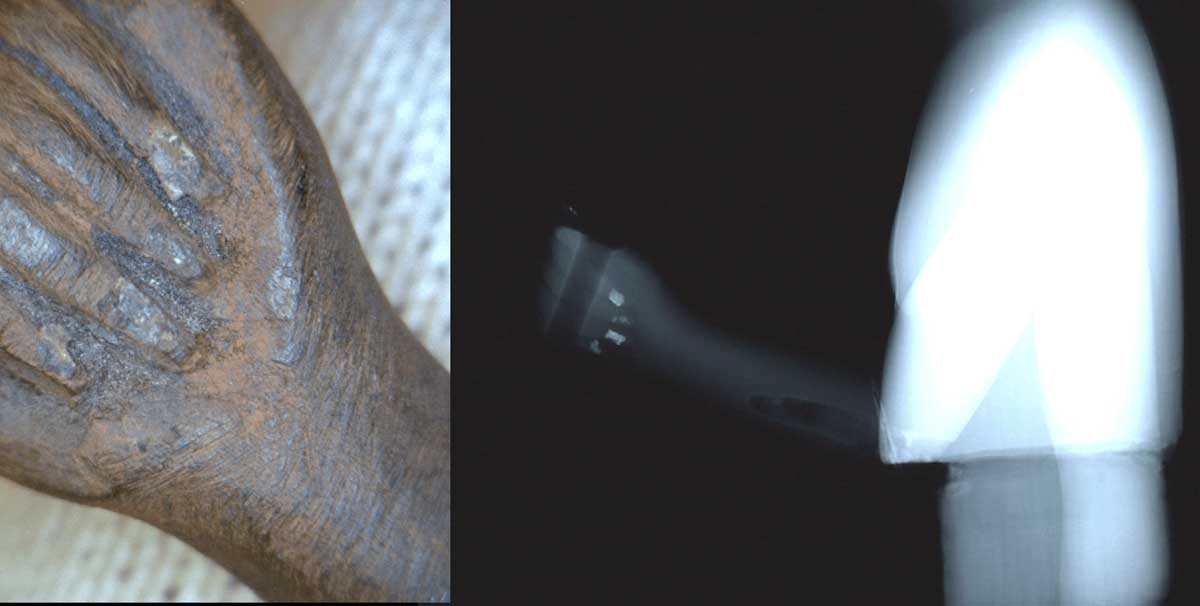 A photomicrograph of the fingernails on the proper right hand alongside an x-ray of the same area, showing dense, radio-opaque material only on the nails. On loan from Eton College Myers Collection, ECM 1474
Page load link
Go to Top