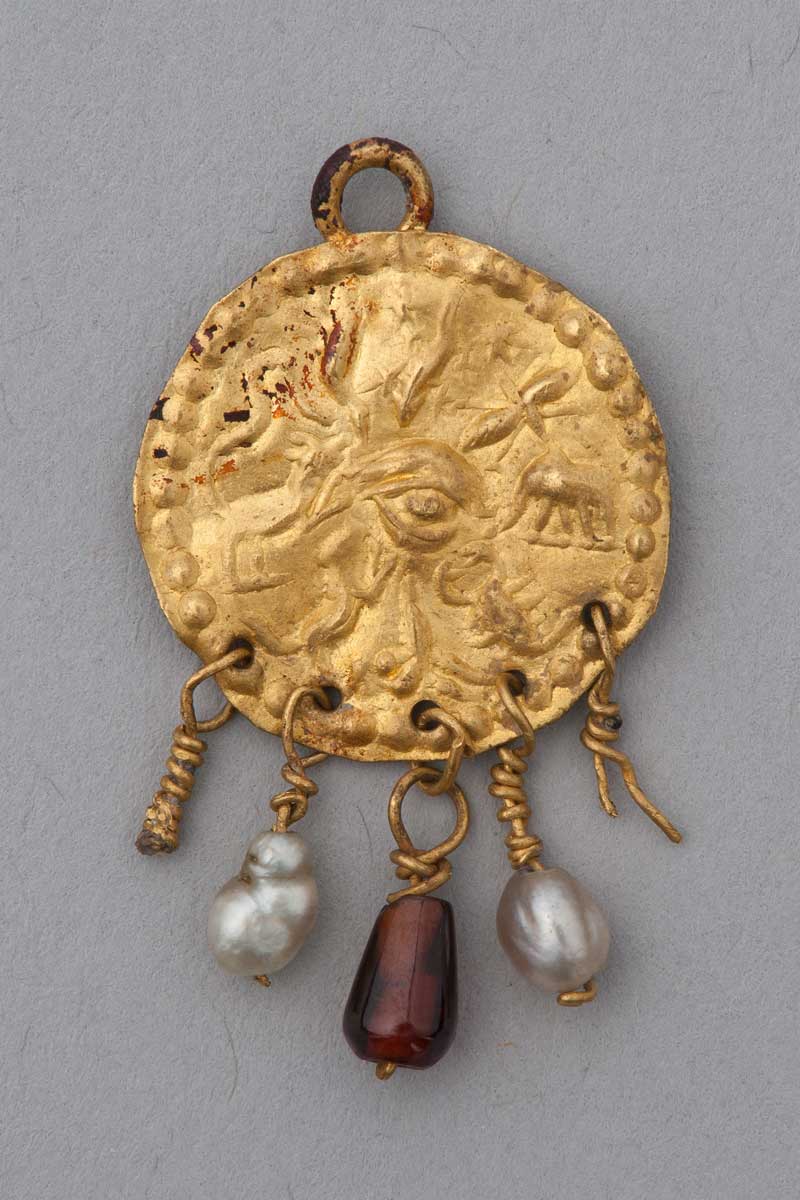 The embossed decoration on this gold medallion features a central image of the evil eye surrounded by several animals: a scorpion, a dog, an elephant, and a bird. These animals are shown in the act of attacking the evil eye.

In Greco-Roman antiquity, such amulets were thought to be endowed with protective powers. Both men and women wore protective amulets in the hopes of attracting good fortune and averting injuries and illnesses, which were seen as the result of daemonic influences. Numerous gold and silver amulets similar to the one in the JHUAM have been found throughout the Roman Empire. In some cases, these amulets are inscribed with magical charms similar to those recorded on papyri. Protective amulets are also found in funerary contexts, where they were meant to protect the dead from the dangers of the afterlife. Evil-eye amulets were also very popular among craftsmen, especially those who worked with metals and glass, whose delicate heating and cooling processes were a constant source of anxiety.

A close parallel to the iconography of the evil eye on the JHUAM amulet can be found in a mosaic from Antioch dated to the early second century C.E.  This mosaic was originally located in the entryway of a Roman house, a logical place for an apotropaic image. Like the JHUAM gold medallion, the Antioch mosaic shows the evil eye being attacked by a variety of animals. In this case, the depicted animals are a dog, a snake, a bird, a cat, a scorpion and an unidentifiable insect. A sword, a pitchfork and a Greek inscription (KAI CY, “And You”) reiterate the mosaic’s power to avert the evil eye, and protect the household from any malevolent visitor.

Another instance of this iconography appears on a Severan marble relief in the Woburn Abbey collection of antiquities. This marble relief is thought to have been built into the wall of a Roman house. Like the mosaic from Antioch, it served both a decorative and a protective function. In addition to the usual array of animals attacking the evil eye, on the Woburn relief one also sees two male figures, one of which is shown crouching in an obscene manner—a gesture thought to be particularly effective against harmful spells. In all of these images, the evil eye is represented as a left human eye. The ancients associated the left side with ominous portents and, in fact, in Latin, the word for “left” is sinister. Since both the mosaic from Antioch and the Woburn relief are dated to the second or early third century C.E., it is quite likely that the pendant in the JHUAM may belong to the same period.

Elworthy, Frederick Thomas. The Evil Eye: An Account of this Ancient and Widespread Supersition (1895)