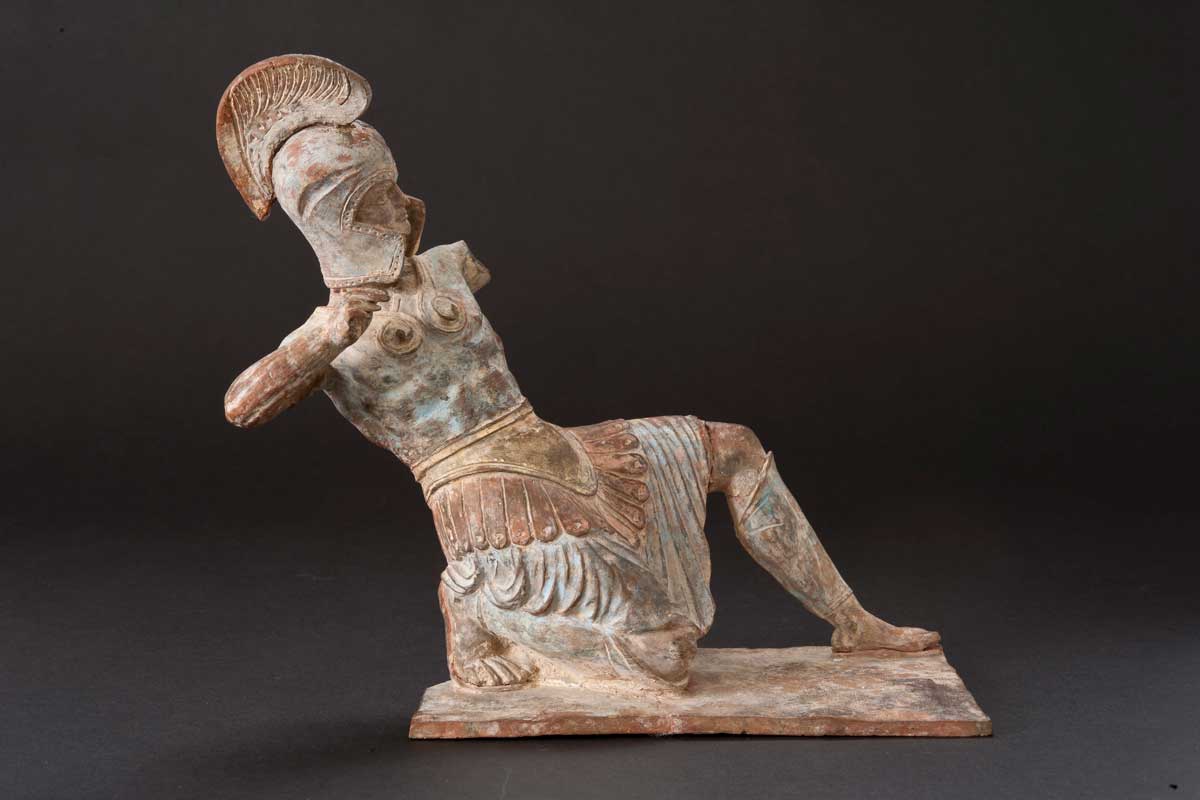 This terracotta warrior is shown wearing a plumed helmet, a muscled cuirass and greaves. His bent right arm and kneeling stance, with its weight on the left side, suggest that this figure once represented an archer. Originally, his extended right arm would have held a bow.

The terracotta archer in the JHUAM presents a number of unusual characteristics. First, the figure’s pose does not correspond to an ancient archer’s correct posture. Although images of kneeling archers appear on a number of monuments, such as the pediment of the Temple of Aphaia in Aegina (circa 510 to 470 B.C.E.), this figure’s exaggerated stance deviates from ancient models. Ancient sculptural and glyptic representations of archers present them with their bow and arm parallel to the ground. Rarely, if ever, are they shown aiming their weapon either upwards or diagonally. Moreover, instead of leaning dramatically backwards, ancient archers are usually depicted in a more upright posture.

The archer’s armor is also problematic. It is very similar to that of a Greek hoplite from the fifth century B.C.E. Hoplites were Greek citizen soldiers, equipped with large shields, long spears and heavy armor, who fought in a tight formation known as a phalanx. His helmet, on the other hand, recalls a Corinthian type of helmet, which was usually worn by heavy infantry and commanders in the Greek armies. This Corinthian-style helmet would have covered most of the wearer’s face, providing additional protection to the soldiers who fought on the front lines.  These helmets, however, usually impeded the wearer’s vision. It is clear, then, that a Corinthian helmet would not have been very practical for an archer. Moreover, archers did not usually wear a cuirass, which was in fact worn by hoplites whose style of warfare required such protective gear. Historians have noted that Greek archers would have been completely unarmored, defended only by the range of their weapons.

Lastly, the amount of paint on this figure and the wide variety of colors employed in its decoration are unusual for a genuine Hellenistic terracotta. The bluish-green on the cuirass, helmet, and greaves creates the illusion that these were made of bronze, which has oxidized over time. In most surviving examples, the colors applied to the surface of figurines by ancient artists has faded. Thus, large amounts of paint typically suggest that an object was not made in antiquity, but created more recently.

The physical evidence discussed here suggests that the terracotta warrior in the JHUAM must be a modern creation. Numerous Tanagra-like terracottas were produced in the late nineteenth century as a response to the great demand for these objects. Nineteenth-century “Tanagras” generally exhibit exaggerated stances, vibrant colors, and eye-catching accessories meant to attract the attention of potential buyers. Figures like this archer offer an idealized hybrid image of the classical world. Often, nineteenth-century “Tanagras” present us with fanciful creations that, though based on ancient models, are ultimately rather different from the art of the Greco-Roman world.