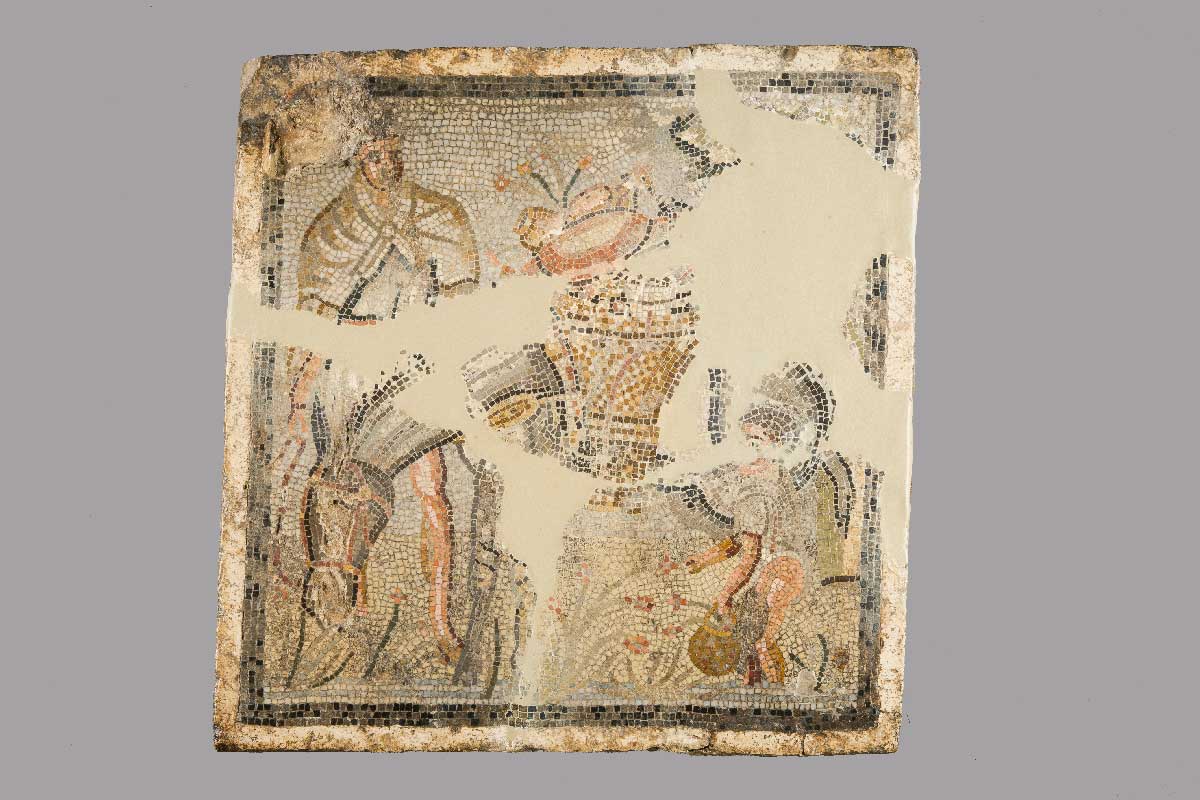 The Hopkins Emblema was the centerpiece of a larger mosaic composition, which may have been framed by a meandering non-figural pattern, as was conventional with emblema mosaics. In general, emblemata were elaborate figural scenes created by inserting a variety of multi-colored tesserae, or little glass or stone tiles. Due to their complexity, emblemata are believed to have been made at the workshop, separate from the decorative mosaic framework, since their iconographical richness required more time and concentration. The limestone slab, in which the tesserae of the emblema were set, could easily be transported to a domestic setting, where it was inserted directly into the pavement at the center of the composition. The Hopkins Emblema portrays a non-mythological scene featuring a donkey and two youths, who are collecting goods on their autumn journey. At the left, a young, beardless man stands frontally toward the viewer. His face is turned to the left in three-quarters view, and he holds the reins of his donkey in his right hand. The man wears a tan-colored pallium (mantle) draped over his grey tunic, which is fastened at the center of his chest. The man’s donkey, composed in a blend of grey shades, grazes on a few withering plants and red flowers near a brook, indicated by the four rows of blue tesserae at the base of the scene. Harnessed to the donkey’s back and supported by both a breastplate and a checkerboard saddle is the man’s cargo, which consists of a brown pot, four long-stemmed red flowers and a brown duck with a black beak. In the foreground, a small youth, in profile and wearing a short grey tunic, wades in the water and gathers more red flowers to place in his basket. The large lacuna toward the right corner inhibits us from viewing the missing element of the scene. It may be a tree, possibly a palm, which is suggested by the linear brownish-green trunk seen behind the youth.

The Hopkins Emblema seems to be inspired by the so-called “season mosaics,” which depict one or more seasons within a composition. Here, we may have a representation of autumn, indicated by the few wilting flowers, the mantle wrapped over the man’s shoulders and the dead waterfowl, which hangs from the young boy’s weaved basket. Season mosaics were popular motifs in Roman North Africa during the Late Empire, and the Hopkins Emblema may belong to the African repertoire. We may compare our emblema with the Neptune and the Seasons Mosaic from a villa at La Chebba, Tunisia (Bardo Museum), which exhibits personifications of the four seasons and the labors of a togate youth, who collects in his brown basket the harvest, olives and red flowers during various seasons. Our mosaic can also be compared to the Estate of Lord Julius mosaic (late-fourth century CE) from an exedra in Carthage, Tunisia (Bardo Museum), which shows several youths gathering ducks, olives, flowers, grapes, birds and hares in baskets to bring back to their master Julius, seated in a garden.