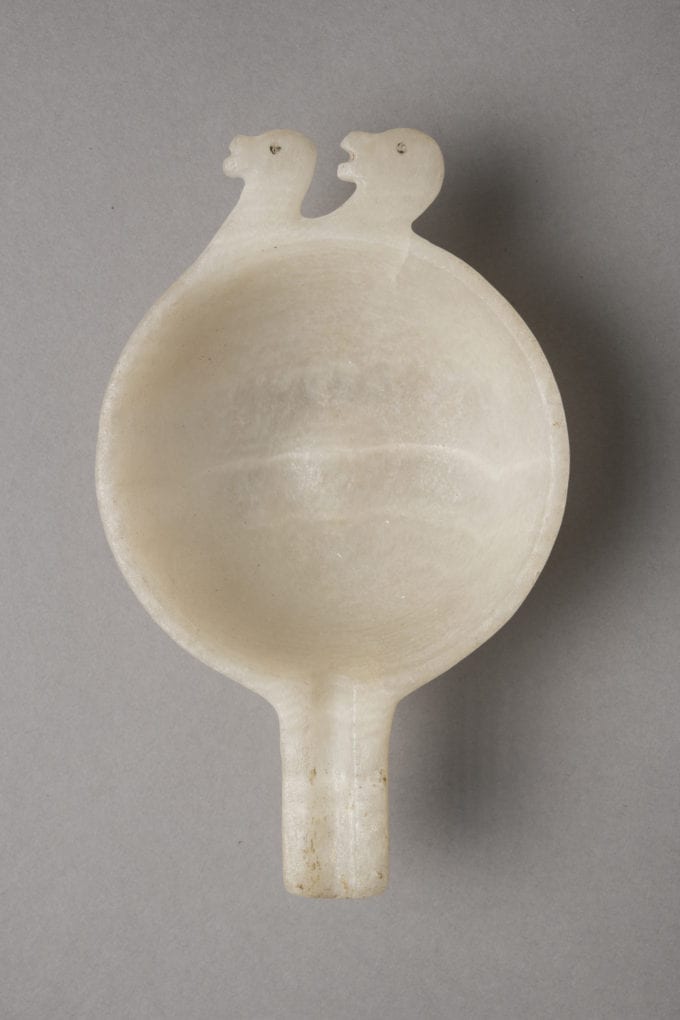 This alabaster cosmetic bowl has a circular base with a flat, rounded rim. Two duck heads rendered in profile protrude out from the rim, forming a handle. Each head is positioned at a slightly different angle, such that the neck of the rear duck forms a stronger oblique. In this way, the two heads are visually aligned, yet dynamically interact. The bill of the rear duck is also opened slightly wider than its companion, adding to the playfulness of the piece. A second handle with a deep central groove projects from the opposite side of the bowl. While this element may have had a functional use for pouring liquids, comparable cosmetic bowls suggest it also represents the tails of the two birds. In ancient Egypt, ducks were associated with female sexuality and thus relate to the sensuousness of cosmetic application. A related corpus of cosmetic implements that show a naked swimming girl holding a waterfowl has also been interpreted as depicting the sky goddess Nut and her consort Geb, who could take the form of a goose or a duck.

This Egyptian alabaster (travertine) object was examined by Ella Cammarato and Debbie Kim. Their study revealed the presence of numerous fine tool and abrasive marks present all over the surface, providing evidence of the extensive polishing required to achieve the highly smooth finish of this translucent stone. Also visible are numerous post-use and post-excavation changes to the object. Multiple adhesives, likely associated with labels attached to the object as part of their collection history, can still be seen when the object is viewed in ultraviolet light. Another likely modern “enhancement”–possibly to make the object more attractive for sale– was the addition of a black resinous material in the eyes of the ducks.