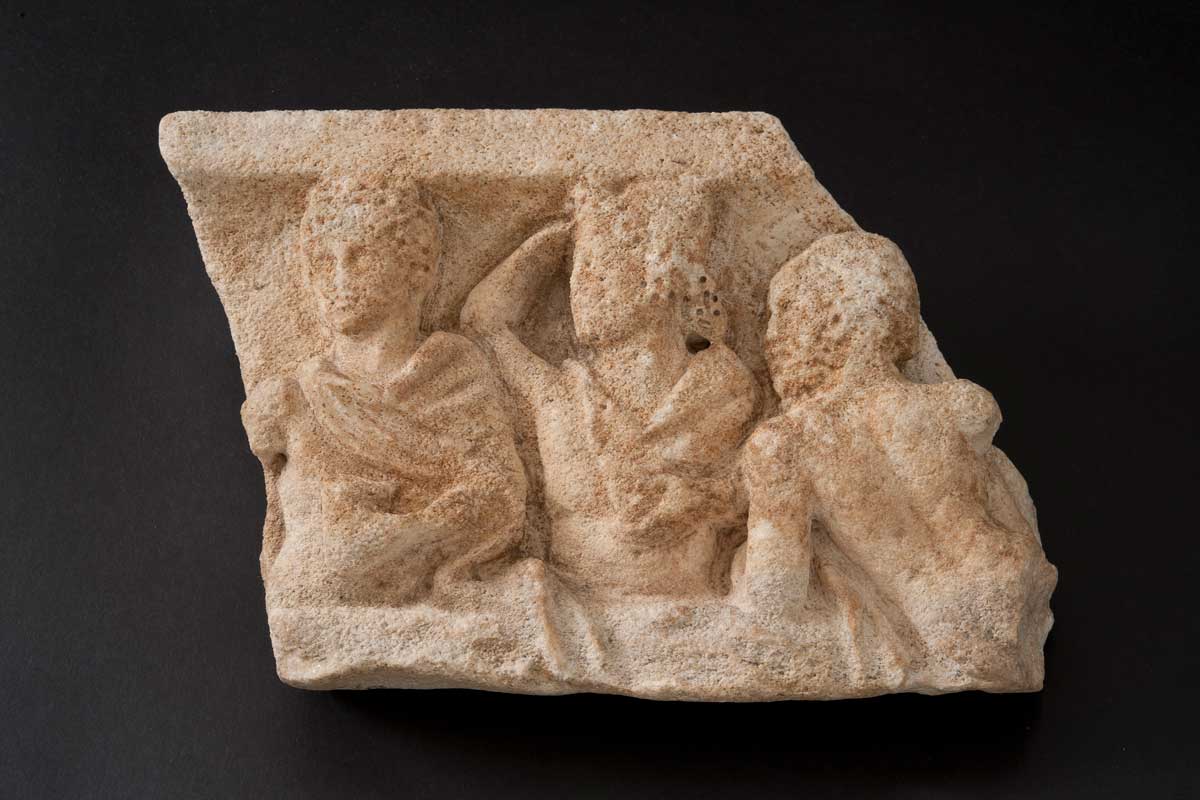 Beneath the upper cornice of this fragmentary marble relief, we see the torsos and heads of three male diners. The two bearded figures on the right are shown in profile, while the beardless, younger-looking man on the left faces the viewer. Two of the diners sport mantles over their shoulders and hold drinking cups in their hands. The placement of the recumbent figure on the right helps articulate the illusion of spatial depth. Although we can only see the upper bodies of the two men on the left, we are invited by the artist to imagine that they, too, must be reclining on dining couches.

Given its dimensions and smooth-sides, the JHUAM marble fragment most likely belongs to a larger funerary monument—either a sarcophagus or a grave stele. Roman burial practices shifted from cremation to inhumation during the course of the second century C.E.. In response to this change in funerary practice, wealthy Romans commissioned marble sarcophagi, which offered a new form of self-representation.

Images of recumbent diners, whether drinking or dining, are among the most frequently represented subjects in Graeco-Roman art, appearing on a wide variety of objects produced for different contexts. In Greek and Roman houses, banqueting scenes appear on drinking vessels, wall paintings and floor mosaics. The image of the reclining diner appears frequently in Greek and Roman funerary monuments. Although there were many ancient precedents for representing diners in a funerary context, banquet scenes did not become a popular decorative motif in Roman funerary art until the first century C.E..

Banqueting scenes on funerary monuments may be interpreted in a variety of ways. On one hand, they may be seen as representations of the deceased, engaged in the same worldly activities that they had enjoyed while alive. But these scenes might also be understood through an eschatological lens. In this case, they may be seen as depictions of banquets in the afterlife. But dining scenes on Roman funerary monuments also evoked ideas of privilege, pleasure, and luxury. At Roman banquets, to dine in a reclining posture was a sign of high status. The fragment of a marble relief in the JHUAM presents us, then, with a scene of daily life that has been transformed into an idealized view of what life ought to be like both in this world and the next.