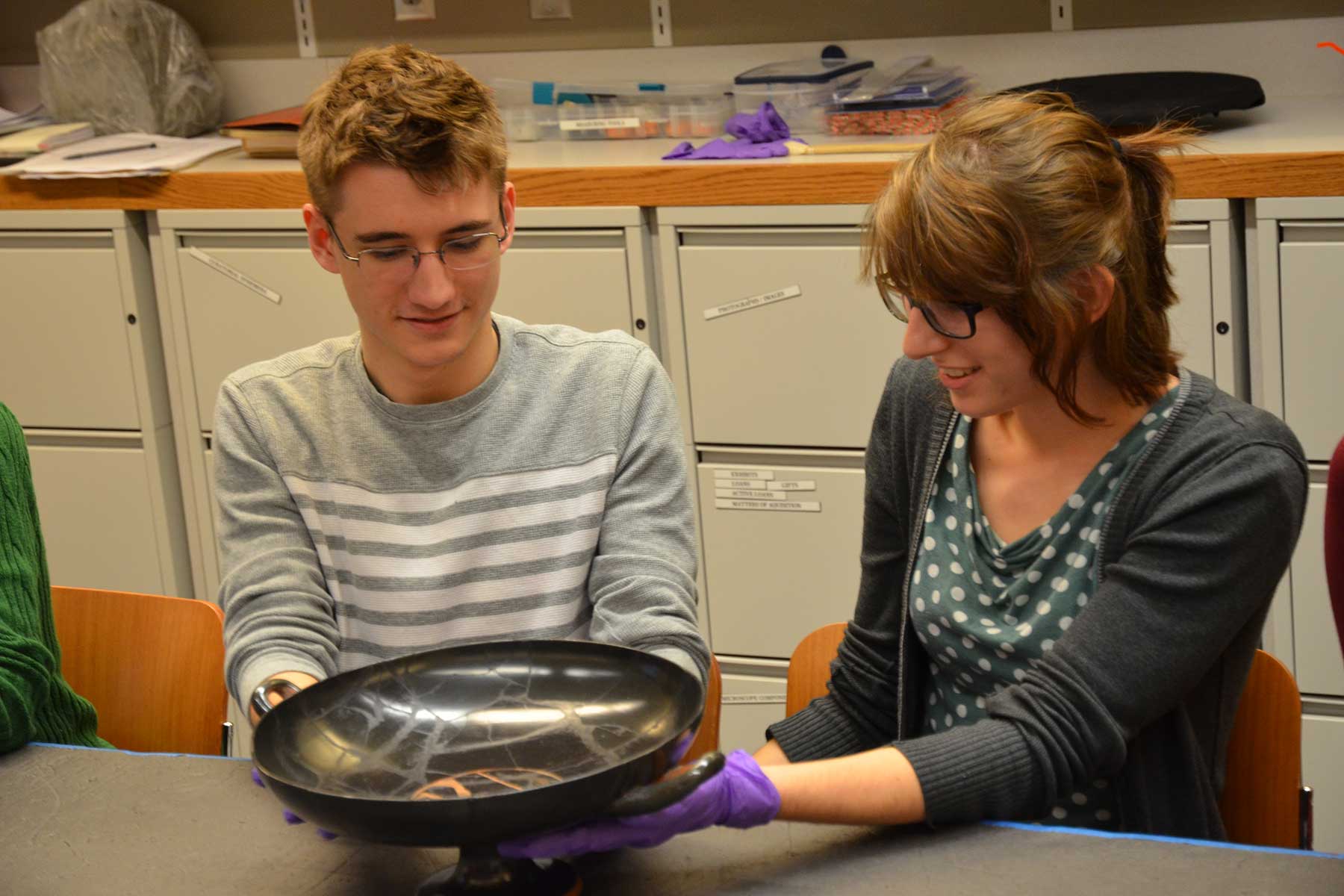 Dane Clark and Ashley Fallon holding the Kylix by Epiktetos (JHUAM B3).

This week–the second week of our semester-long endeavor–our class was transported to a different time and place. We were given the privilege of holding several of the museum’s kylikes (drinking cups) in our hands, instantly creating a tangible connection between our class and the symposium-goers of ancient Greece. As described by Kathleen Lynch in her analysis, “Drinking Cups and the Symposium,” (In Cities Called Athens. Studies Honoring John McK. Camp II, edited by Kevin F. Daly and Lee Ann Riccardi. Lanham: Bucknell University, 2014: 231-271), a symposium was a communal drinking event usually attended by seven to fourteen men typically of elite status. Symposia provided a forum for the formation of a cultural identity as well as a medium through which individuals or social groups could distinguish themselves. In this context, elites would differentiate themselves from the rest of society through the exclusivity of the event, while variations in the kylix shape and decoration displayed by each attendee would reflect in-group competition or individual distinction. Drinking cups are the most numerous of all the sympotic forms in the archaeological record, and they were also the most used, repaired, and replaced, indicating their importance to sympotic culture. The cups provided an indispensable, utilitarian service while also existing as a tangible declaration of its owner’s identity.

As we passed around the cups, the general consensus was that they were much lighter than expected. The glossy black slip mimicked a metallic sheen, and the thin, top-heavy shape gave each cup an air of weightlessness. They were smooth to the touch and curved exactly to the shape of the hands holding them. As I placed my fingers around the bowl, the handles slid perfectly into the space between my thumbs and index fingers. We proceeded to take the measurements of each of the cups, since determining the dimensions of an object is the first step in an accurate recreation. It became evident that each cup displayed similar proportions: the height of the cup was divided evenly into two sections (from the base to the bottom of the bowl and from the bottom curve to the rim), and the total width of the cup was divided into thirds by the two handles and the base. However, these measurements were far from precise, with each cup slightly off-proportion in some way or another. It was at this point that Matthew Hyleck of Baltimore Clayworks explained the essential role of the potter’s hands in the formation of these vessels. Without measuring tools, the potter’s hands served as guidelines for proportion. Master potters could produce hundreds of vessels in a few hours, forming the shapes from muscle memory. Each cup produced reflected the hands of the potter who made it. This effect is intrinsic to the form of the kylix, allowing it to take on a personal quality as it moves through the hands of its owners. The same sensation was experienced by each of us—over two millennia after the fact—as we wrapped our fingers around the smooth slipped surface of the cup. 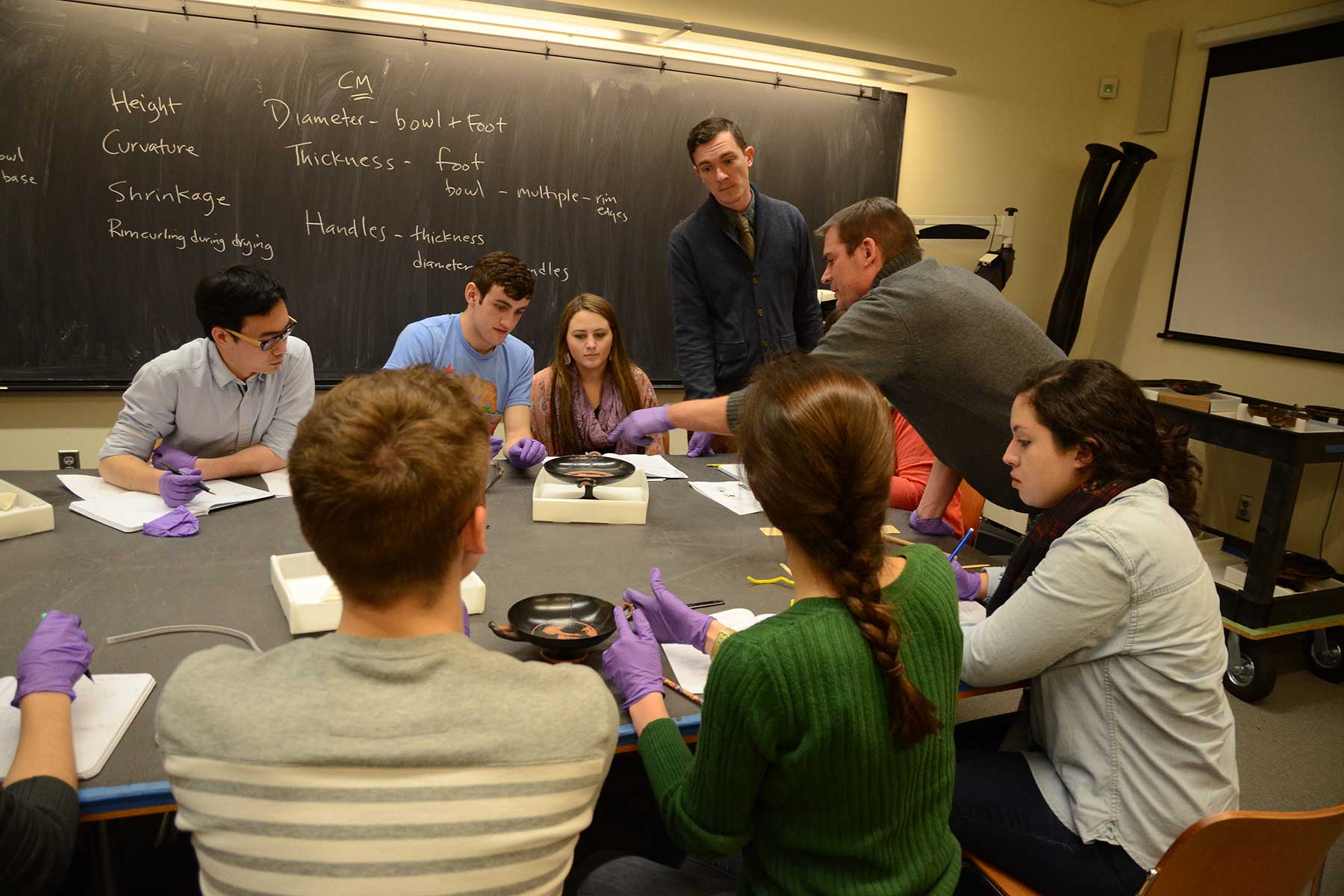 Matt Hyleck describing how he as a maker and practitioner thinks about the manufacture of a ceramic vessel such as this one from the Archaeological Museum.

As we move forward into the production stages of our project, it will be important to keep in mind this relationship forged between pot and potter throughout the process and how it contributes to the overall impact each cup has in the hands of its user. At roughly the size of the average Athenian symposium guest list, our little group of potters and apprentices exists as a modern twist on the ancient tradition. As we attempt to recreate the kylix shape, I believe an understanding of the context in which and for which these vessels were made will prove invaluable, for the shape of the cups and their context are inherently linked.