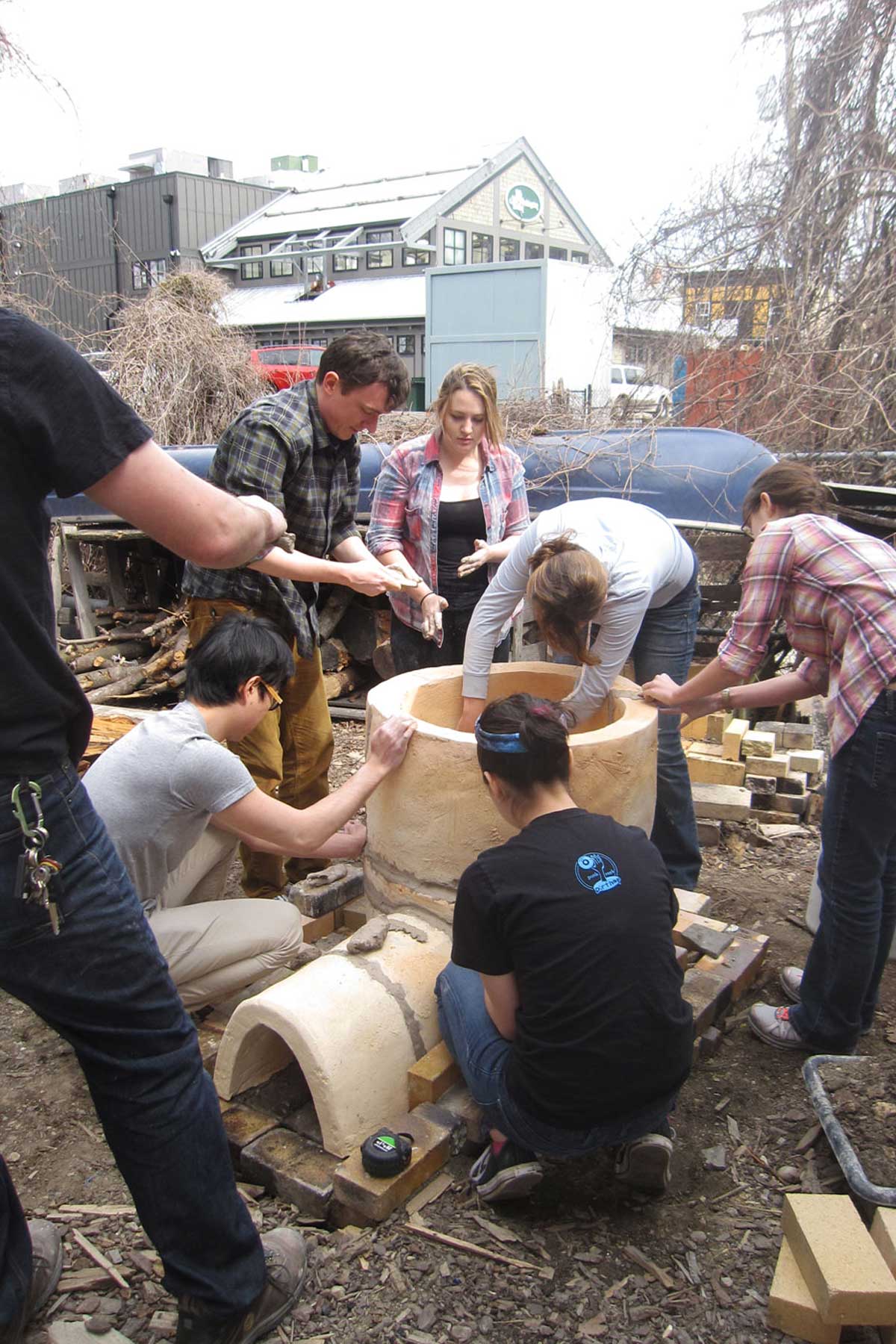 Assembling all the parts of our kiln and sealing the join edges using fire clay.

We had a lot to cover at Clayworks with our kylikes and our kiln! We read selections on kiln construction for class, which is probably one of the most important aspects of our task to recreate ancient Greek vases. Our entire project depends on the success of our kiln. Eleni Hasaki establishes from the archaeological record the standard structure for a kiln, “updraft, and doublechambered.” The basic kiln had a firing chamber where the vessels were placed and a secondary fuel chamber. Air was allowed in through the base and out the top of the kiln. We also read Joseph Veach Noble’s conclusions on kiln technique and the hazards of firing. An experienced Greek potter could tell what stage the process was in by the colors of the flame in the kiln, they also used unfired clay with black glaze to signal stages of production. Furthermore, since Attic slip does not melt, it was possible to stack vessels within the firing chamber, and the Greeks did. Anything from remaining moisture or air bubbles to uneven temperatures in the kiln can cause the pottery to explode!

Our kiln is largely based on a replica designed by Lisa Kahn and John Wissinger, so much so that they visited Clayworks with Matt Hyleck and Sanchita Balachandran who asked even more questions to base our kiln on to their specifications. (See Kahn, Lisa C. and John C. Wissinger. “Re-creating and firing a Greek kiln.” In Papers on Special Techniques in Athenian Vases. Edited by Kenneth D.S. Lapatin. Getty Museum: Los Angeles: 129-138.) They built a small, circular, updraft model,intending to reproduce Noble’s three stage firing process. Their results indicated that it takes seven to nine hours, requiring approximately 100 pounds of firewood, and constant monitoring. A covering saggar box was added to protect the kylikes from ash and flame marks. Kahn and Wissinger concluded that, with a small kiln like theirs, a workshop could produce six pots per week. 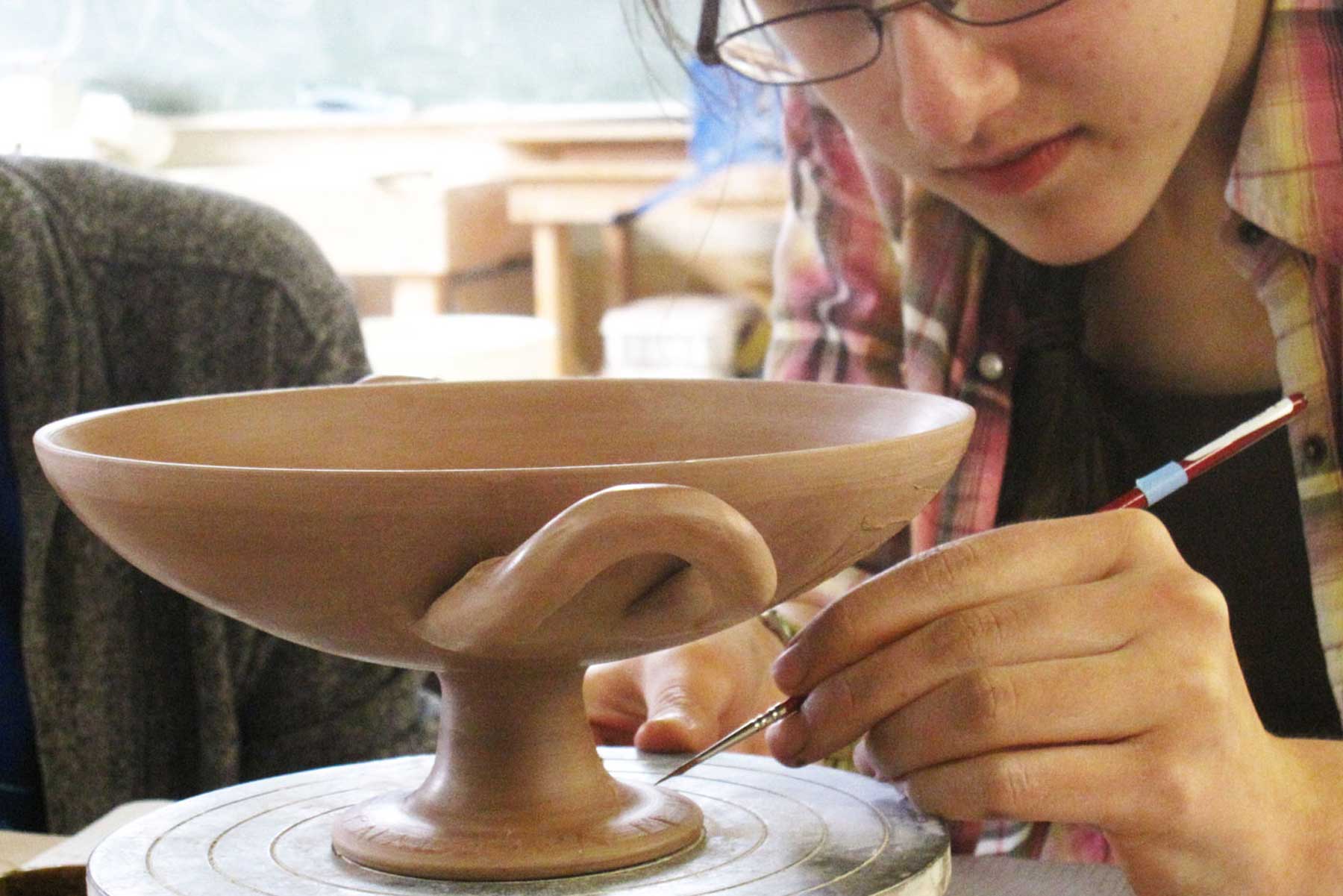 Anna Soifer puts the final touches on the painted inscription on the foot of a kylix.

Our class divided time between completing the construction of the kiln and finishing up final decorating touches on our cups. With two tasks to complete, there was little room for error. Inside, groups worked feverishly to finish the decorations on this final painting day. Professor Balachandran brought in a super concentrated slip, to be used for relief lines. She had allowed the slip to evaporate for 5-6 days. Groups were able to produce a super fine line with the linierhaar though we struggled with the single hair paintbrushes. In the midst of our excitement and eagerness to finish painting, some of our handles broke off! This was very disappointing, but we are taking it in stride, looking forward to a future lesson from Balachandran on how to use conservation materials to restore the handles to their original place.

Outside, we helped assemble the inner wall of the kiln and the perforated floor as well as the outer wall, made of brick. Matt and Cami had already built the foundation of the kiln into the ground behind the studio. There are two channels for airflow running across the bottom of the kiln, one under the firing chamber and one under the fuel chamber. We also filled in the space between the inner and outer walls with dirt, which will act as our insulating material. The parts of the kiln are joined together with wet fire clay, which Matt says will just bake into place as we use the kiln to fire our tiles and kylikes. Unlike our ancient counterparts, we will be using a digital pyrometer to monitor the temperature inside the 18-inch ware chamber. Moisture is an issue going into next week’s firings, as rain is forecasted! Hopefully this will not impact our firing. We will not be using a saggar box, because of the lack of space. This is probably the only area where we are deviating on from Kahn’s and Wissinger’s design.