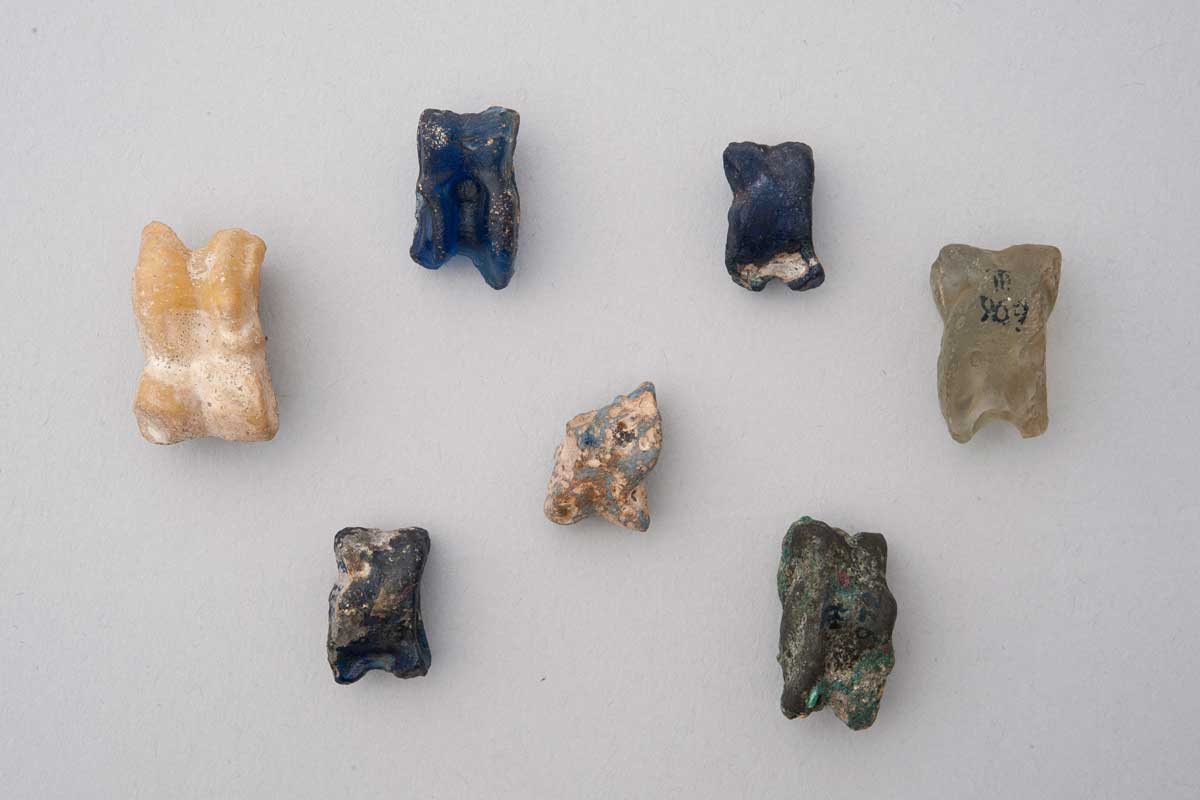 Although knucklebone pieces were originally made from the knucklebones of sheep or goats, they were later crafted in a great variety of materials: brass, copper, silver, gold, glass, bone, ivory, marble, wood, stone, bronze, terracotta and precious gems. All of the JHUAM knucklebones are made of glass, except for knucklebone piece HT 972, which is made of copper alloy. Usually produced in sets of four or five, the pieces themselves are diminutive: about two centimeters long and one centimeter wide. No side of a knucklebone is alike. Each piece has four long sides and two short sides. Of the four longer sides, two are noticeably broader. One of the broader sides is concave, while the other is convex, just as one of the narrower sides is indented and the other is flat. Their corners are either rounded or pointed so that they are unable to stand on one end.

The precise origin of the game of knucklebones is unclear. It may have originated in either Egypt or Lydia. When exactly the Greeks and Romans adopted this game is also unknown. Still its popularity in antiquity is confirmed by abundant archaeological and visual evidence: not only have numerous knucklebone pieces been found at various sites, but the game itself –whether played by men, women or children- is frequently depicted in painting and sculpture.

The game of knucklebones, also known as astragaloi in Greek and tali in Latin, could be played in several different ways. The simplest and perhaps most common form of this game, played by children, was comparable to the modern-day game of jackstones: all five small pieces were simultaneously tossed into the air, the goal being to catch as many as possible on the back of one hand. Another variation of the game involved players throwing one or more of the pieces into a small dirt hole in the ground or into the opening of a small vessel. He or she with the best aim would win.

Adults, however, played different games of knucklebones. For women, the game of knucklebones served an oracular function. In antiquity, a woman who played knucklebones was seen as placing herself in the hands of fate. This was especially true of young, unmarried women who, by playing knucklebones, were thought to be entrusting themselves to Aphrodite. In Greek, young, nubile women were often referred to as philastragalai, i.e. “loving knucklebones.” Aphrodite’s role in the game was so prominent that a perfect roll in which all the knucklebones landed on different sides was called an “Aphrodite throw.”

Men, on the other hand, treated knucklebones like dice. Using only four knucklebones, men would throw the pieces onto the ground or a table thirty-five times. Each side represented a different numerical value, so that each knucklebone throw was calculated. Differently from the modern game of dice, it was not the side of the knucklebone that faced up that counted. It was instead the side that landed on the surface. Although each knucklebone side was different and therefore, did not require a numerical marking, often, for the sake of convenience, numbers were inscribed on the pieces.

It is clear, then, that knucklebones were used differently according to the player’s age and gender. These different variations of the game of knucklebones also recall the social hierarchies that set children apart from adults and men from women in the ancient world. Ultimately, they bring us closer to the games and customs that colored ancient daily life.