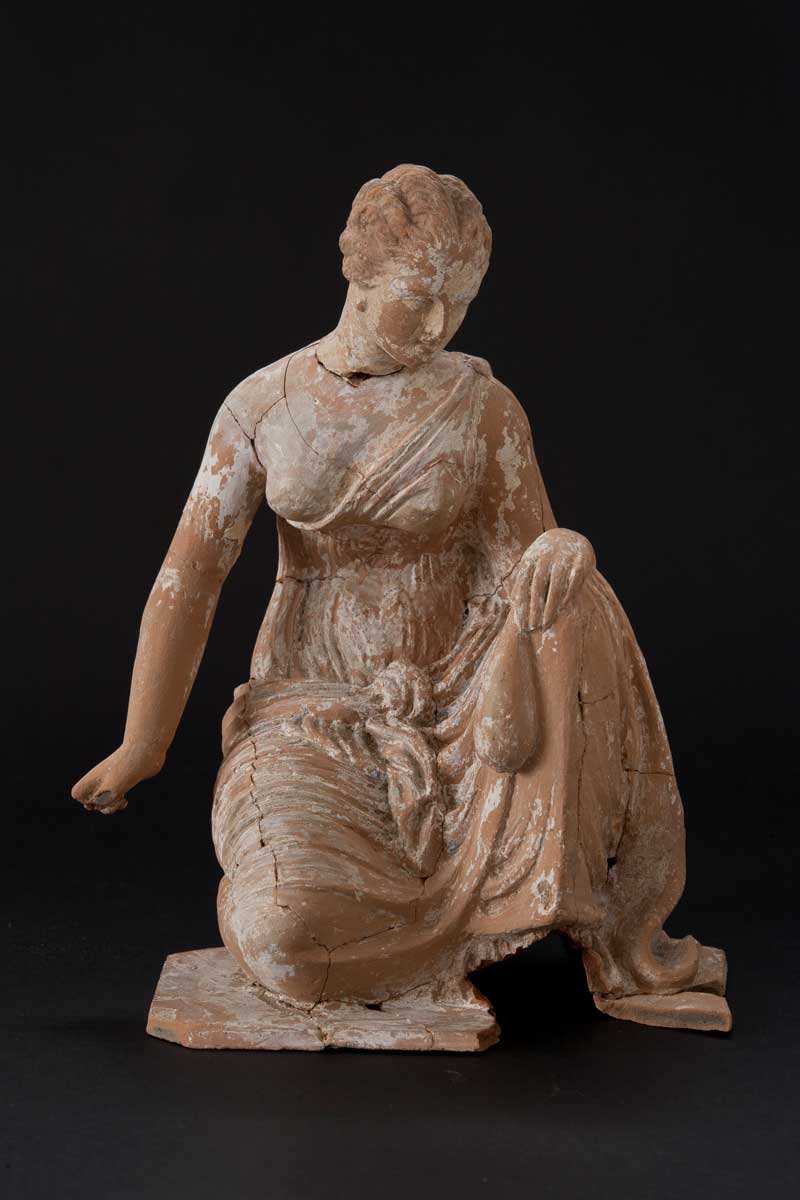 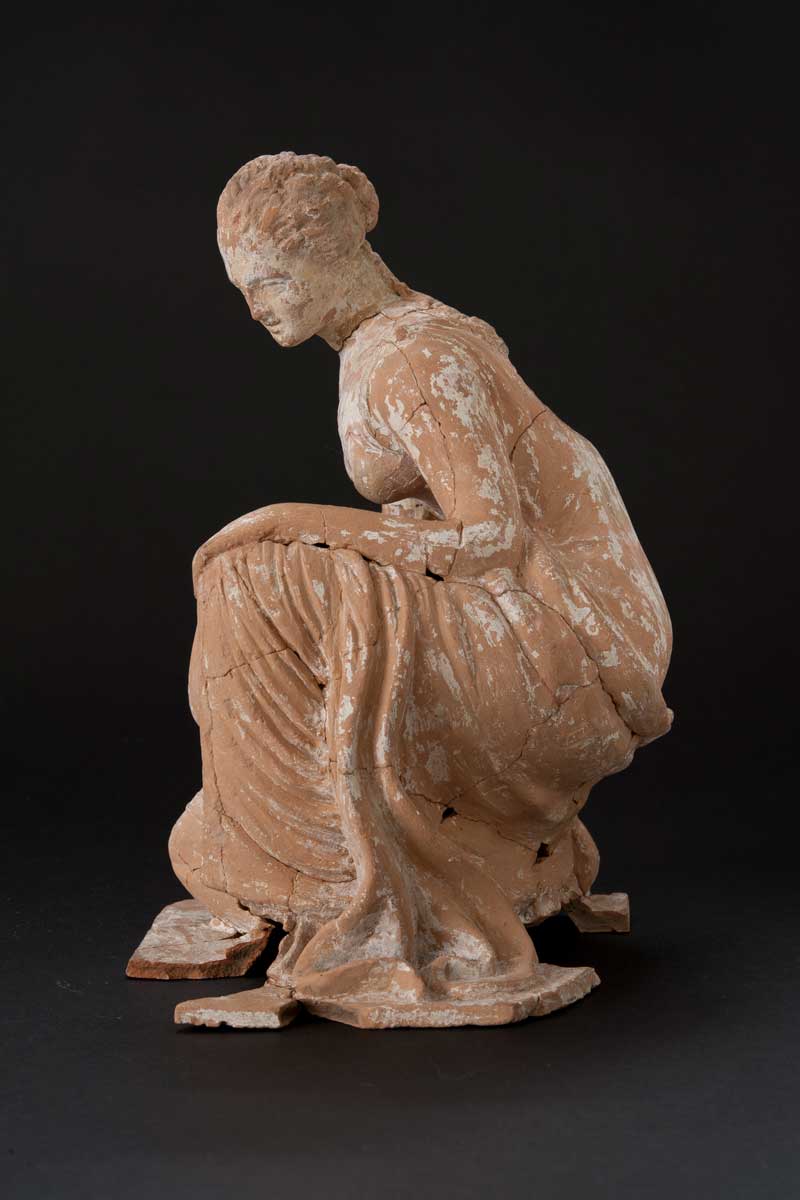 This figurine depicts a young woman crouching to play knucklebones, a popular Greek game similar to modern-day “jacks”. She is dressed in a thin chiton (a long tunic commonly worn in ancient Greece) pinned over one shoulder with what appears to be a separate loose shawl tied around her hips. Her hair is parted and twisted in a simple melon-coiffure knot decorated with ribbons, which trail down her back. Her kneeling stance suggests that she is actively engaged in play, and her right arm is drawn back as if about to toss the knucklebones, known in Greek as astragaloi. In her left hand she holds a small bag, used for storing and carrying the knucklebone pieces.

Scholars believe the image of the knucklebone player was first introduced in terracotta around 350 B.C.E., but its popularity rose extensively during the Hellenistic Period with the rapid rise of Tanagra-style production in Athens and its diffusion across Greece. This particular pose was favored not only because of the popularity of the game, but also because the crouching figure displayed the complex folds and drapery patterns valued by coroplasts, the artists who made such figurines.

Like many other Hellenistic terracottas, this figurine has a fully modeled front and back, but many of its characteristics do not seem to match its assumed temporal context. For instance, the mantle tied around the player’s hips and the style of the knot do not correspond to the treatment of drapery in other Tanagra figurines, which stay close to reality in style and tend to reflect actual styles worn by the Greeks.  Upon actual attempt, it becomes clear that a separate piece of material could not have been knotted in such a style and probably would not have been able to stay upon one’s hips. This discrepancy suggests the artist was not basing his/her design upon a style that had been viewed in reality.

The folds of the mantle and chiton are also a source for concern, especially the large S-shaped fold trailing down the figure’s left knee. Folds on the garments of Tanagra figurines are not usually so flowery or ornate. Ancient Greek artists preferred cleaner, simpler lines because they reflected the actual fall of the material accurately. Such ornate drapery is closer to romanticized, sentimental Victorian depictions of ancient Greece than to the style of genuine Hellenistic sculpture.

Nineteenth-century replicas of Hellenistic terracottas often feature overly sentimental or sensual poses. For instance, authentic Tanagra figurines that depict knucklebone players typically show them crouched low, as if they were actively engaged in the game.  Here, however, the player is more upright and relaxed, almost thoughtful. The figure’s quiet introspection and less active posture are also indicative of a sentimental style of representation characteristic of Victorian Tanagras.

The ribbons tied around the player’s hair also reflect Victorian fashion, and would not have been found in ancient Greece. Such details reflect a revival of interest in Tanagras during Victorian times, where they were often replicated or inspired new, modern versions that were collected and displayed in peoples’ homes.

The thin, hollow form of the JHUAM figurine and its thin base also raise questions regarding its status as a genuine antiquity. Most authentic figurines were composed of two molds, one for the front and one for the back, with a smoothed yet ever-present join line faintly visible on the sides of the figurine. Instead of fully filling two molds (for a solid or thick base) and joining them together, this piece appears to be made of thin slabs of clay and lacks the characteristic join line. The bases of Tanagras are also typically thick, a standard characteristic clearly ignored in this piece.

Please also click here for information about the recent conservation work completed on this object.