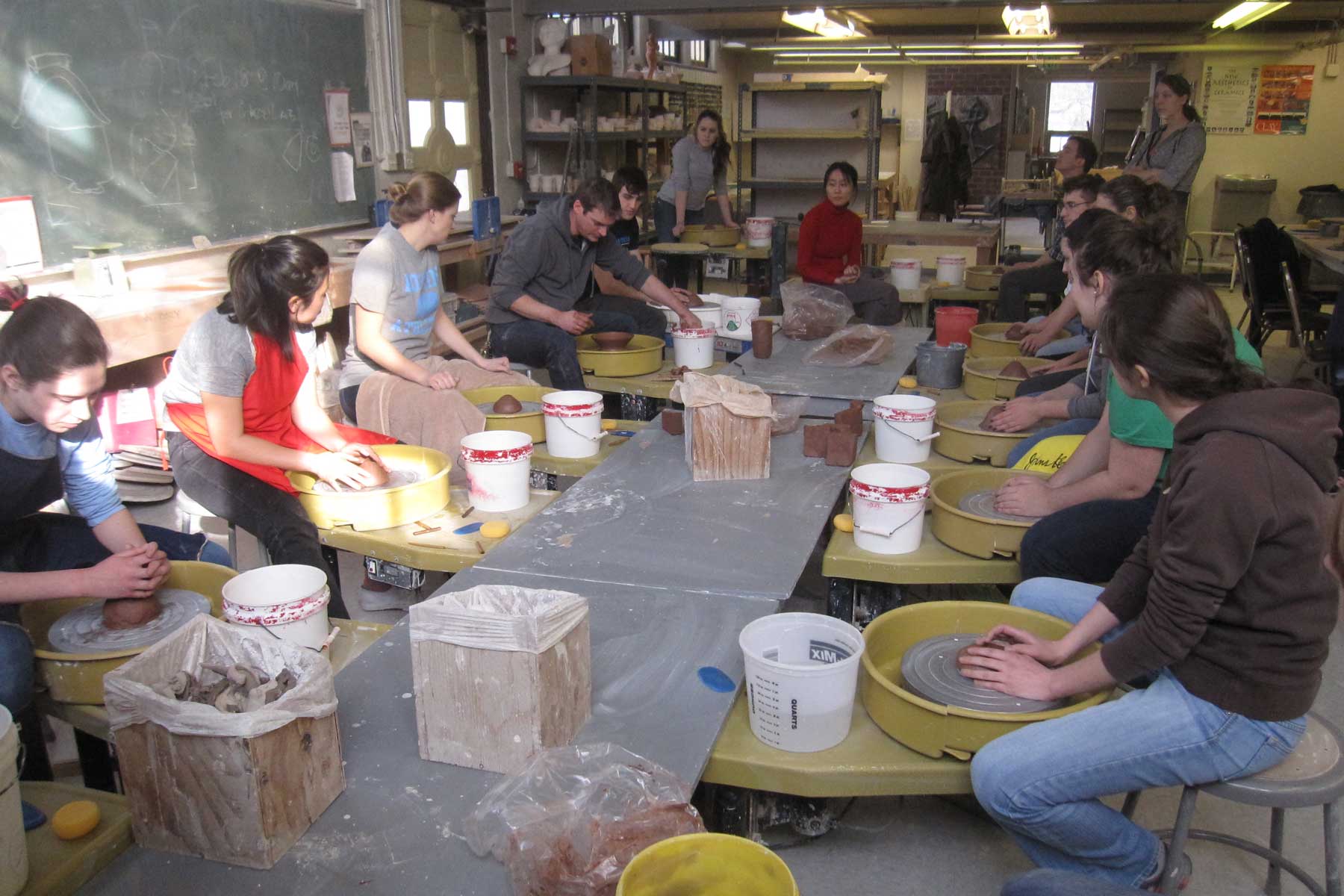 The class at their wheels, watching Matt Hyleck throw a bowl for a kylix.

“The production of wheel-made pottery requires a high degree of manual dexterity and a continual application of artistic judgment. The form must evolve slowly, but not too slowly or it will collapse, and it has to be developed to its final state through a series of intermediate steps.”–Joseph V. Noble. 1988. The Techniques of Painted Attic Pottery. Revised ed. London: Thames and Hudson.pg. 24.

This fourth class was divided into two segments: a lecture by our teaching assistant, Ross Brendle, on the iconography found on ancient Greek ceramics, and a head-first plunge into the world of pottery throwing. Ross’s lecture made sure that we were well acquainted with the many terms and concepts involved in analyzing ancient Greek vessels. We started with identifying the part of a Greek cup that we are most concerned with in terms of iconography: the tondo. The tondo is the circular, decorated area inside the bowl of the cup, where pictures are most commonly found, though they are also frequently found on the outside. At around 530 B.C.E., with the advent of the red-figure technique, decoration on the interior of the cup was primarily contained within a circle at the bottom of the bowl. However, moving along into the 5th century B.C.E., painters began to gradually push the limits of their scenes by expanding outward and filling up more of the cup’s interior with their designs, all the while both decreasing the depth of the bowl and increasing its width. Eventually, the scenes fill up virtually the entirety of the interior and, in some instances, the cup becomes so shallow and so wide that it is essentially a plate, at which point some cups lost all functionality. The most common motifs found on red-figure vessels include depictions of athletics, scenes of symposia, and scenes from mythology. Because of the significance and prominence of wine in symposia, Dionysus (the god of wine) was a very common figure to be portrayed.

One of the amazing things about these images is their incredible detail. How exactly the ancient painters were able to produce such elaborate and finely detailed pictures is not exactly understood. However, some scholars believe that the ancient painters may have applied the slip using a special sort of brush, possibly only consisting of an individual hair from an animal like a horse or boar or even the whisker of a cat. This information was especially important to keep in mind as we prepared to start throwing, because we would eventually have to create some kind of image in the small, awkwardly-shaped section of our own bowls. 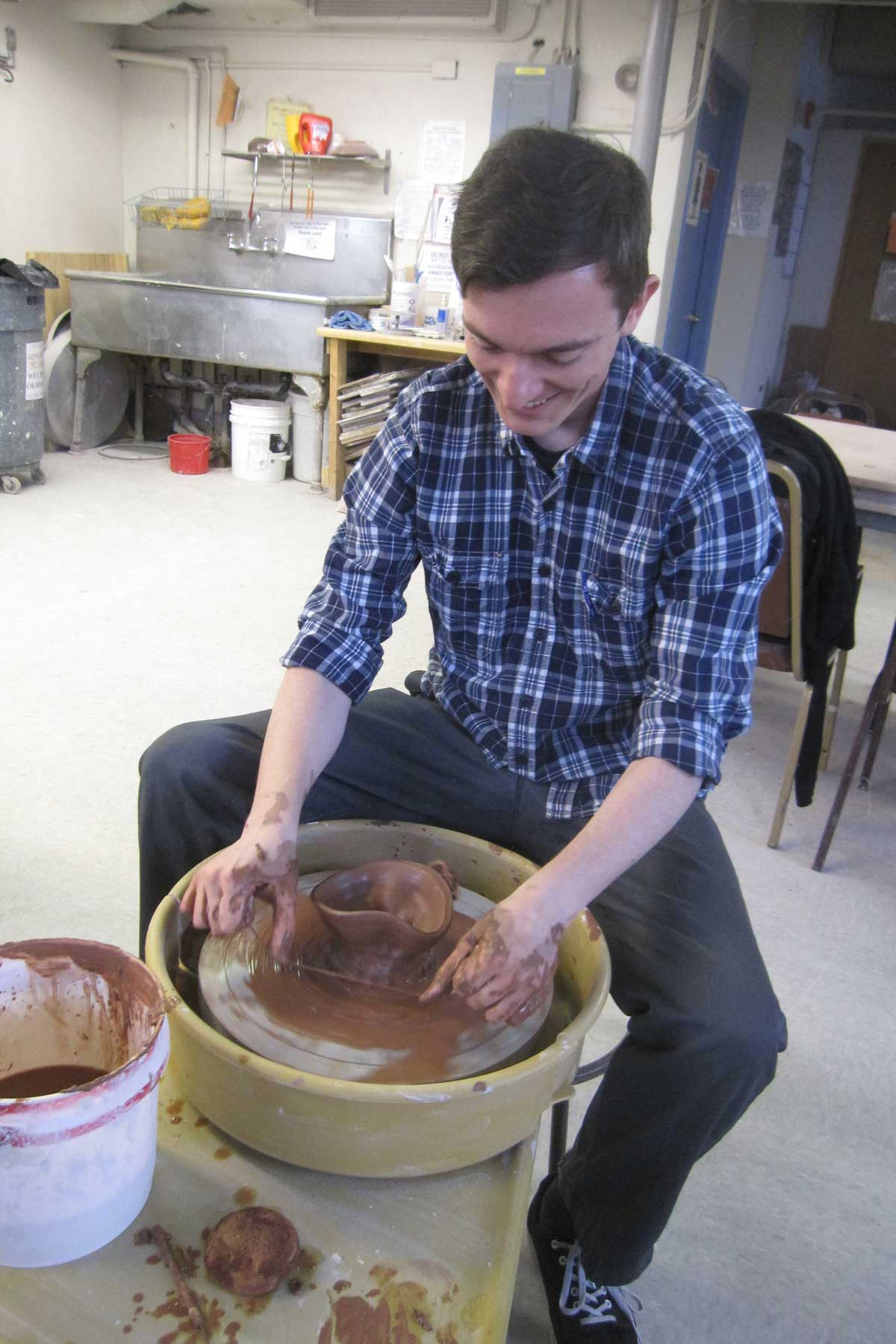 Ross Brendle tries his hand at throwing a kylix bowl on the wheel.

Our next task was to begin throwing the pots. With only a few students having previous experience throwing pots, this was a wildly new experience. Matt began by repeating his demonstration of wheel throwing he had given us the previous week. After that, our time had finally come to begin throwing on our own. We started by cutting slabs of clay from the blocks, and then quartering them to get the size that we wanted to use to throw. Throwing turned out to be far more difficult that it looked. Even simply centering the lump
of wet clay on the spinning wheel proved a difficult task for many of us. If the clay wasn’t centered, it would begin to wobble and adamantly protest as it spun. The more out of center it was, the more uncooperative the clay became. While watching an expert potter like Matt at the wheel, the clay seemed to move so smoothly as he centered it, brought it up into a cone then back down, and then opening it into a bowl, all with effortless grace. However, as a first time thrower, my own finesse and grace seemed to be considerably lacking. While Matt seemed to guide the clay with such ease, it turned out that there was a significant amount of physical exertion required to form the shapeless clay into anything remotely resembling a bowl.

As the end of class drew near, those who managed to successfully make bowls cut them from the wheels with wires, and those who were less successful squished theirs into lumpy arches to dry before being reused. As frustrating and exhausting as this was, it was a mere taste of what it would have been like to learn how to throw ceramics as an actual apprentice in ancient times who would have worked day-in and day-out, tirelessly devoted to learning the craft.