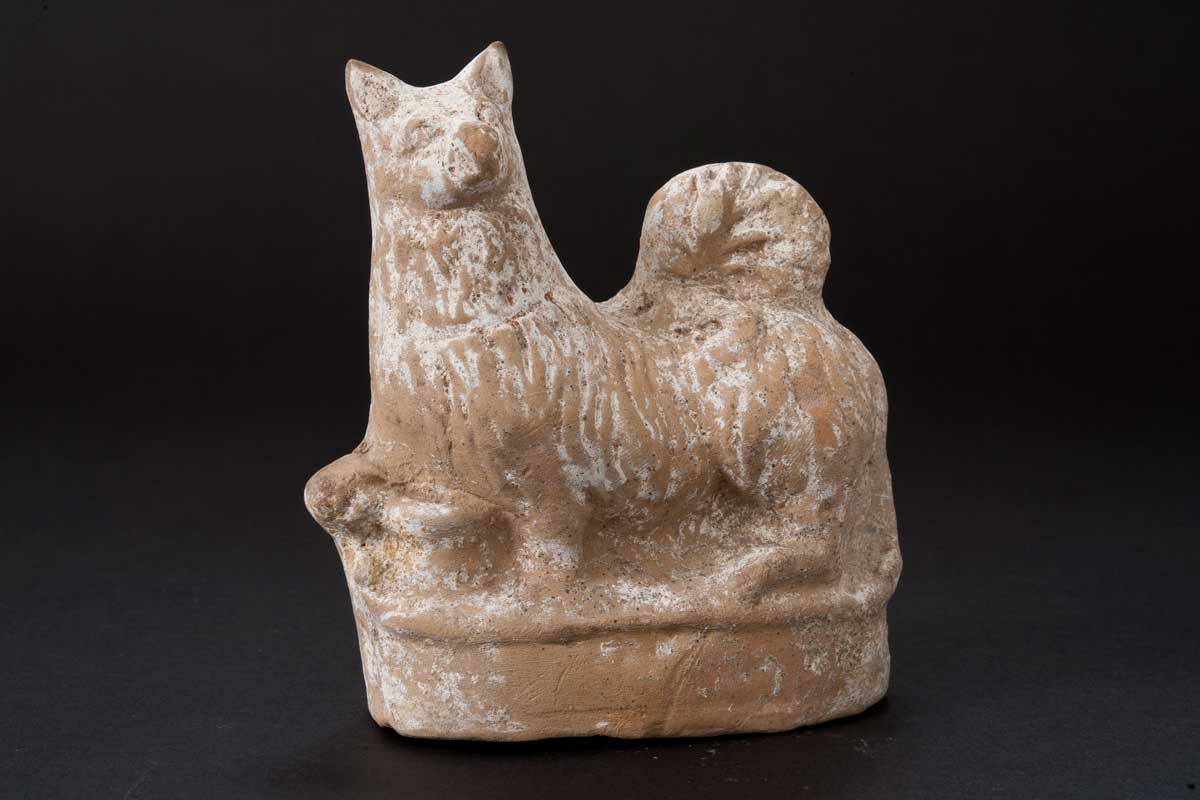 Measurements: L. 9 cm; Ht. 11.2 cm
Materials: Ceramic
Date/Culture: 4th– to 1st-century B.C.E., Greek
Find spot: Unknown
Accession number: 387
Condition: Restored. Traces of white slip preserved on the surface. Numbers (from a modern context) are written in black pencil or pen. Some dark orange or red paint is also discernible around the neck where a collar is hand-carved. A larger smudge is located on the back. The tips of the ears are a darker brown, either from paint or a possible burn.

This terracotta figure of a dog shows him standing in profile with his right foreleg raised over a small dish. The dog’s head faces forward. Although the dog’s fur is intricately rendered on the front, the back is smooth. The terracotta is hollow and rattles when shaken, thus leading us to believe it was a child’s rattle.

Ancient rattles were made of various materials, including clay, wood, bronze, dried heads of poppy flowers, and pebbles. They came in a variety of shapes such as spheres, boxes, and animals like owls, pigs, or, as in this case, dogs.

Much like children today, ancient Greek children played with a variety of toys including rattles similar this one. Due to its large size, however, it is possible that this rattle was meant to be handled by an adult who might have used it to entertain and distract a child.

Numerous rattles have been found in ancient Greek funerary contexts. In antiquity, children were typically buried with their toys and, sometimes, with their pet dogs and pigs. The Maltese lapdog was a favorite pet in antiquity, and it is quite possible that this rattle was meant to represent such a dog. Children were depicted with dogs in a variety of media, including ancient Greek vases as well as terracotta figurines, such as the small ceramic cradle in the JHUAM collection.

Greek mold-produced terracottas begin to appear in the archaeological record around the 7th-century B.C.E. The JHUAM dog rattle was clearly made with at least one mold. The piece’s smooth back suggests that it may have been made from a hollow front mold that was filled with clay. The back would have been attached by pressing a piece of wet clay between the figure’s two halves. Once its two halves had been attached, this piece was placed in a kiln and fired.

It is difficult to offer a precise date for this terracotta dog rattle. Similar animal-shaped rattles have been found in different archaeological contexts, dating between the 4th and 1st centuries B.C.E. The closest parallel for the JHUAM’s dog rattle comes from a child’s grave in Southern Italy from the 4th century B.C.E.