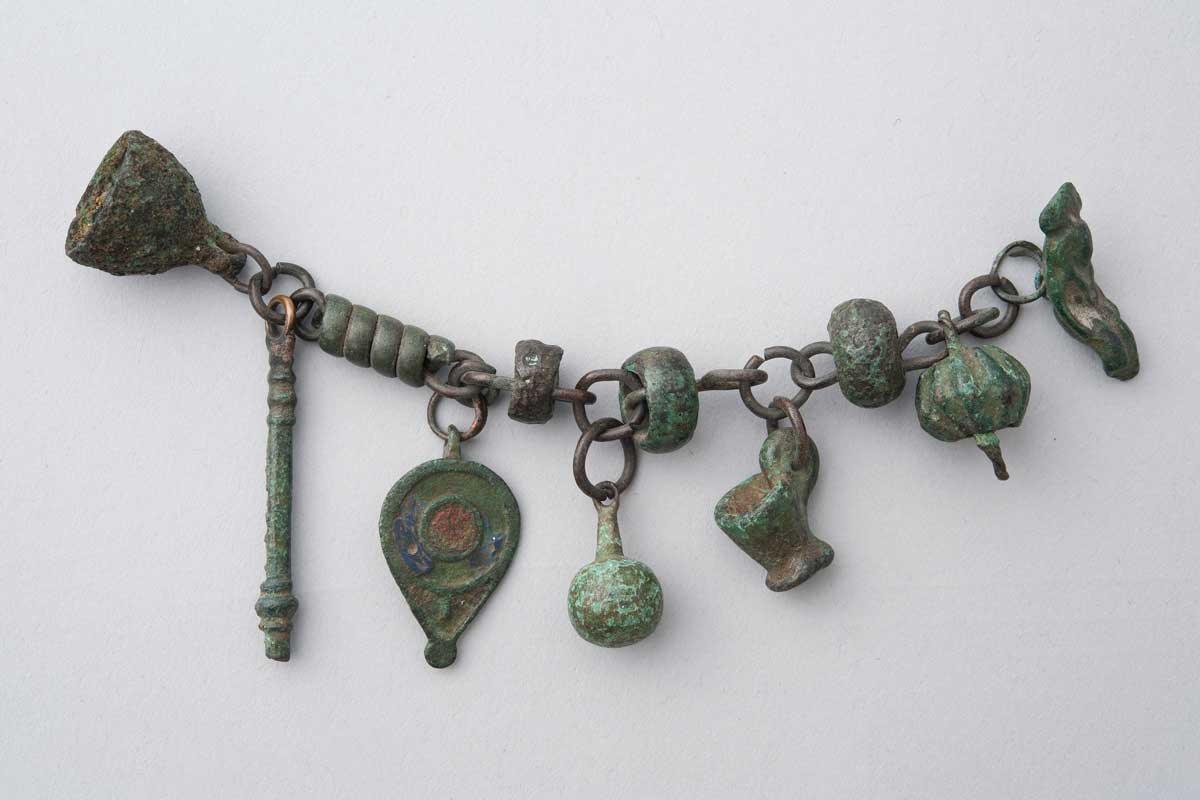 Materials: Bronze
Date/Culture: 2nd Century/Roman
Findspot: Unknown
Collection: Helen Tanzer
Condition: The necklace and pendants are oxidized. The details on the small human figurine have been rubbed away.

When looking at this Roman necklace fragment one may be struck by its similarity to a modern charm bracelet. In antiquity, this necklace may have been worn as an amulet. There are multiple charms in the shape of objects from daily life, as well as a small, well-worn human figurine.

On the far left it appears that part of the clasp, made up of the half-conical charm and the thin, long pin, has remained intact. Next to the pin, a lamp is clearly identifiable by its shape and details. While it is hard to determine the function of the next object to the right, the difference in color and texture suggests that this charm and the lamp were made at different points in time. If so, it is possible that these charms might have been added to the necklace over time. The changes in color may be due to differences in aging and corrosion, or a different composition of the alloy in each piece.

Next we have a small cup, similar to those used for everyday drinking. The presence of such everyday objects suggests that, if used as an amulet, this necklace was most likely associated with everyday problems and concerns. The use of a common alloy and the absence of any precious materials also suggest that this necklace would most likely have belonged to an average citizen, rather than a member of the elite.

The next object is also difficult to interpret, but the figurine on the right end of the chain is especially important to the interpretation of this piece. Despite its worn appearance, this tiny charm is clearly female. The extra wear is due to frequent rubbing, probably performed as a part of a prayer or a vow. Such charms were typically depictions of Greco-Roman deities. The Hellenized Egyptian goddess, Isis, was especially popular and may have been represented in this pendant.

Having made her way to Roman Campania by the late second century B.C.E., Isis was gradually incorporated into the Roman pantheon.  Often associated with other goddesses, such as Venus, Ceres and Fortuna, Isis continued to be worshiped well into late antiquity. She had many prominent temples dedicated to her throughout the Greco-Roman world, including sanctuaries in Rome, Pompeii, Delos and Athens. Isis also occupied an important position in the daily lives and households of the Romans. Wearing this necklace may have been thought to instill the wearer with fertility, success, or general good fortune, themes commonly associated with the Egyptian goddess.

While similar chains were often adorned only with an Isis pendant, the inclusion of other charms in the JHUAM necklace may reflect the focus of the wearer’s wishes or preoccupations. The rather worn Isis charm calls attention to the votive nature of this necklace. Rubbing this tiny representation of the goddess would have allowed the wearer to access the power of Isis and communicate with her through a physical connection.