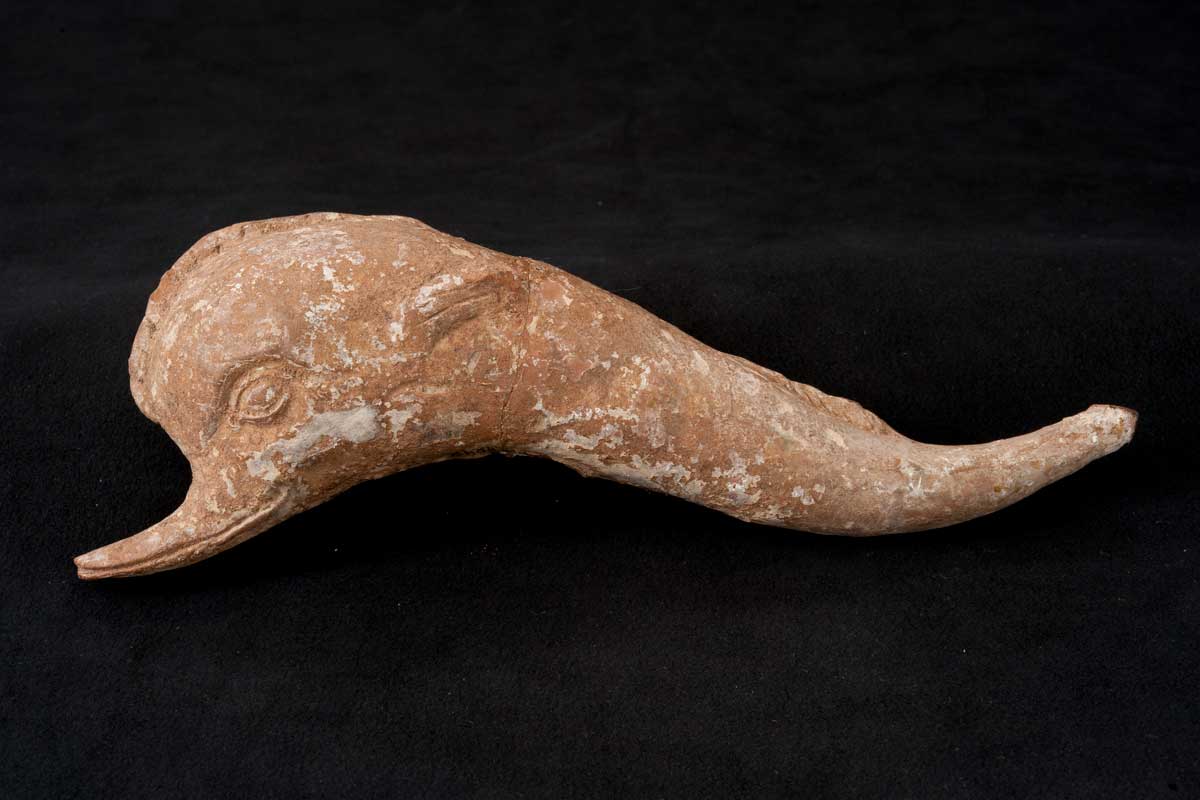 Measurements: Length 21 cm, Depth 3.8 cm
Material: Terracotta
Culture/Date: Greek, possibly Hellenistic (after the 4th century B.C.E.)
Find spot: Unknown
Accession Number: 9040
Condition: Object has been mended, and retouched ruff and snout. A break-line can be found along the top and center right side of the object. The dolphin’s tail is missing. Remains of white slip are still visible on the dolphin’s body.

The terracotta dolphin in the JHUAM was most likely a mold-made child’s rattle. The dolphin is shown in profile with raised tail and snout, pronounced fins, lateral gill-like grooves, and an S-curve body. Given its gentle demeanor and elegant form, the dolphin was viewed as man’s special friend and became a popular subject in Greek and Roman art. Images of dolphins appear on numerous monuments and in a variety of media, including coins, wall paintings, and ceramic vessels.

In Classical mythology, dolphins were closely associated with Dionysus. One myth recounts how, having been kidnapped by pirates, Dionysus struck his transgressors with fear, leading them to throw themselves into the sea. But the god took pity on them, and transformed the pirates into dolphins. Several other tales attest to the close relationship between dolphins and men. For instance, Taras, one of Poseidon’s son and the mythical founder of Taranto, is said to have been rescued from a shipwreck by a dolphin who carried him to safety. Plutarch (On the Cleverness of Animals) tells the story of how Odysseus’ son, Telemachus, was also rescued from drowning by dolphins when he was still a child. Pliny the Elder, however, offers one of the few “historical” narratives about the bond between men and dolphins. According to Pliny, in the time of the emperor Augustus, a boy living in Baiae (on the Bay of Naples) developed a most wondrous relationship with a dolphin who not only let him ride on his back, but even responded to the name given to him by his young master—Simo or “snub-nose.” These stories shed light on why a dolphin might have been seen as an appropriate subject for a child’s rattle.

In ancient Greece and Rome, children were seen as vulnerable and in great need of protection. Given the mythical associations of dolphins with rescue and salvation, it is possible that the dolphin-shaped rattle in the JHUAM not only served as a toy, but was also intended to function as a protective amulet. Since so many ancient toys have been found in funerary contexts, it is also possible that this image of a dolphin might have been intended as an offering for a child who had died at a young age.

Despite the frequency with which they are represented in Greek and Roman art, dolphins are rarely depicted with accuracy. The “mistakes” on our rattle are typical: the dorsal fin is placed on top of the head instead of at the center of the dolphin’s back; the flippers are missing; the body has an exaggerated curve; and the tail (which is largely missing its fin) is placed vertically rather than horizontally. Although in actuality the dolphin’s tail continues the line of the body, until the late fourth century artists regularly showed the tail pointing downward. After this point in time, the dolphin’s tail is usually shown turned upward, and in the Hellenistic period it was occasionally transformed into an acanthus or lotus blossom. At this point, scales were also added to the dolphin’s body in a clear deviation from their actual appearance. Given the tendency among Hellenistic artists to depict dolphins with an upward-turned tail, it is reasonable to date the JHUAM dolphin rattle to a period after the fourth century B.C.E.