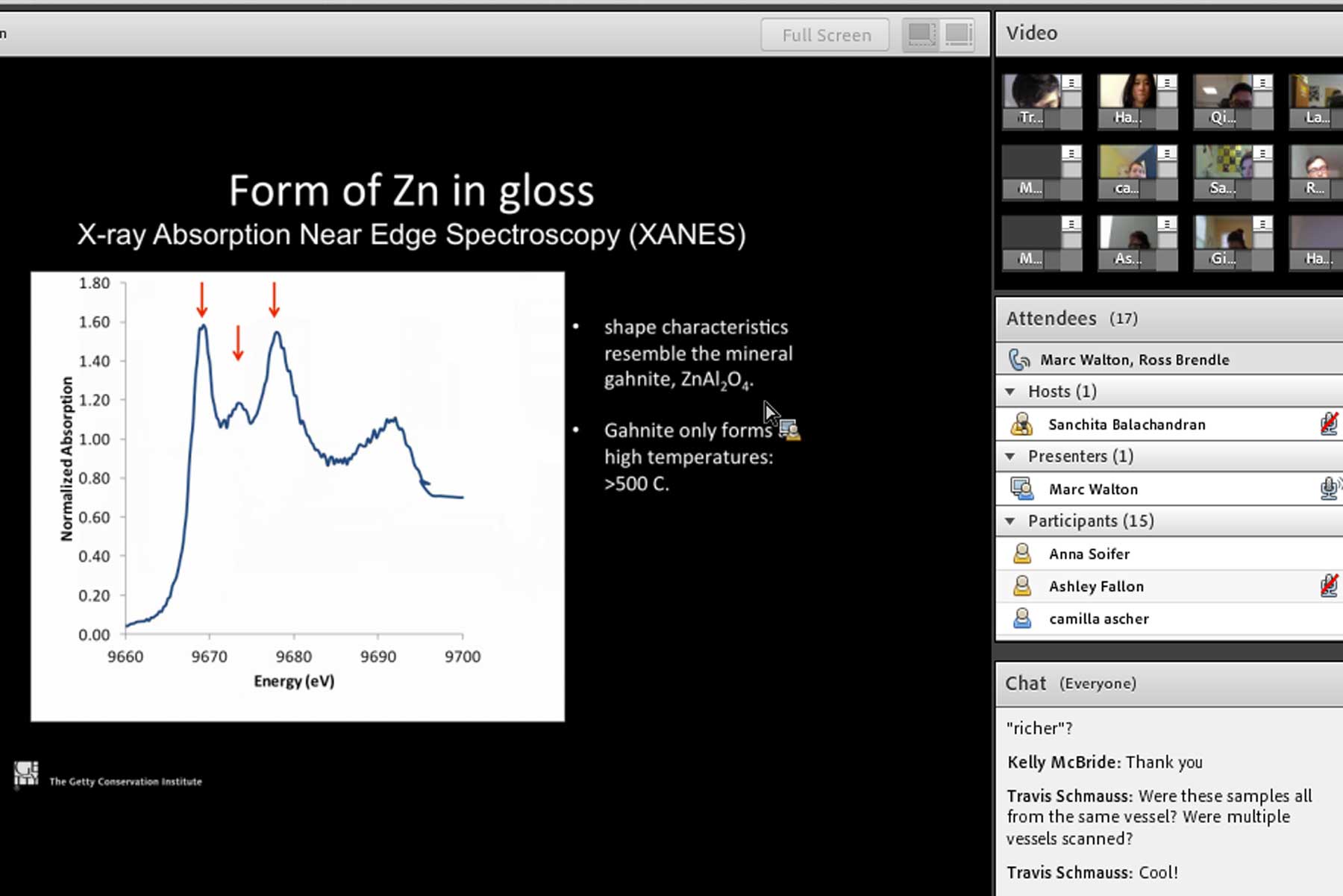 A screenshot of our online class with Professor Marc Walton.

With school cancelled due to snow and only four classes remaining before our firing, we had to be creative and hold our week six class on Adobe Connect. After some initial technological difficulties and a commendable amount of patience from everyone, we were able to hold a relatively normal class. Our guest speaker was Professor Marc Walton, a senior scientist at Northwestern University-Art Institute of Chicago Center for Scientific Studies in the Arts. Walton explained the materials science aspects of slip (the thin clay material used the paint red-figure vases), clarifying the chemical changes in clay when it is fired, and explaining how his research on slip has presented new information and questions to consider.

To understand slip, we must first understand what happens to it in the firing process used by the ancient Greeks. According to the existing literature, firing these vessels is thought to have happened in one single firing split into three distinct stages within the firing. The first stage was an oxidizing firing at 800°C, with oxygen allowed to circulate freely in the kiln, and in which the vessel lost residual water and organic material, became harder and the iron particles turned red in color. The second stage was in a reducing atmosphere at 900°C, which means that oxygen was removed from the kiln by closing all air vents. Additional organic materials such as leaves, tree limbs, and sawdust were added to the fire to produce smoke, which turned the iron particles in the whole vessel grey-black. In this stage, the slip vitrified (or became glassy), which caused the iron particles present in the slip to become encased in a glassy matrix. In the last stage, oxygen was reintroduced to the kiln as the temperature fell; areas of the vessel which were painted with slip were already vitrified, and therefore remained black. All other areas not painted with slip return to an orange color. 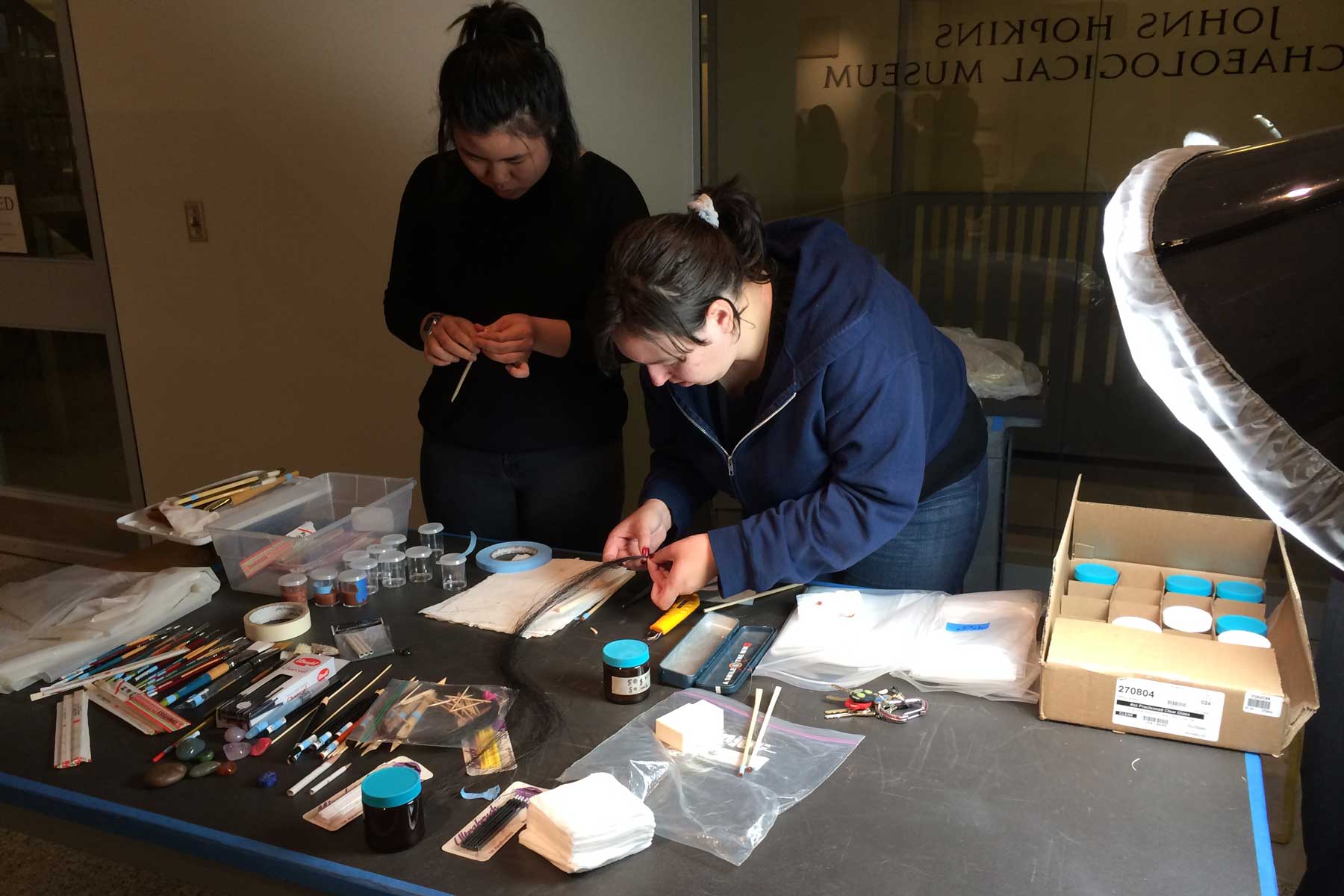 With this information in mind, Walton went on to explain his findings that zinc is present as a trace element in slips found in ceramics made all over ancient Greece and Etruria, over extended periods of time. There are limited sources of zinc in the ancient world, including possibly from contamination of the soil, but more likely associated with mining and processing of ores such as at Laurion in ancient Greece. Walton suggests that an acid containing zinc (in the form of vitriol—commonly used in antiquity for dyeing leather, as medicine, etc.) may have been added to raw clay during the levigation process as slip was being prepared.

Walton also talked to us about slip decoration. While studying the thin relief lines found painted within red figures, and the thicker contour lines painted around red figures, Walton and his team found that the raised relief lines were completely vitrified, while the flat contour lines still contained some unvitrified clay particles. This suggested that the relief lines were fired to higher temperatures than the contour lines, something that went against most of our readings which said pots were only fired once; Walton’s findings suggest that pottery was fired multiple times rather than all at once. The closer we get to understanding slip, the more it seems to elude us.

Earlier in the week, we planned for the snowstorm by picking up the supplies we need to decorate our own tiles at home. The supplies we tested last week for applying the slip were laid out on a table so we could choose those that we found worked best for each of us, including making our own chopstick paintbrushes from various animal hairs. Last week we had difficulty creating raised relief lines with the slip, and unfortunately we could not look at the cups in the archaeological museum this week for comparison. Hopefully we will be able to look at the cups outside of class and replicate the lines at home through trial and error while painting our own images.