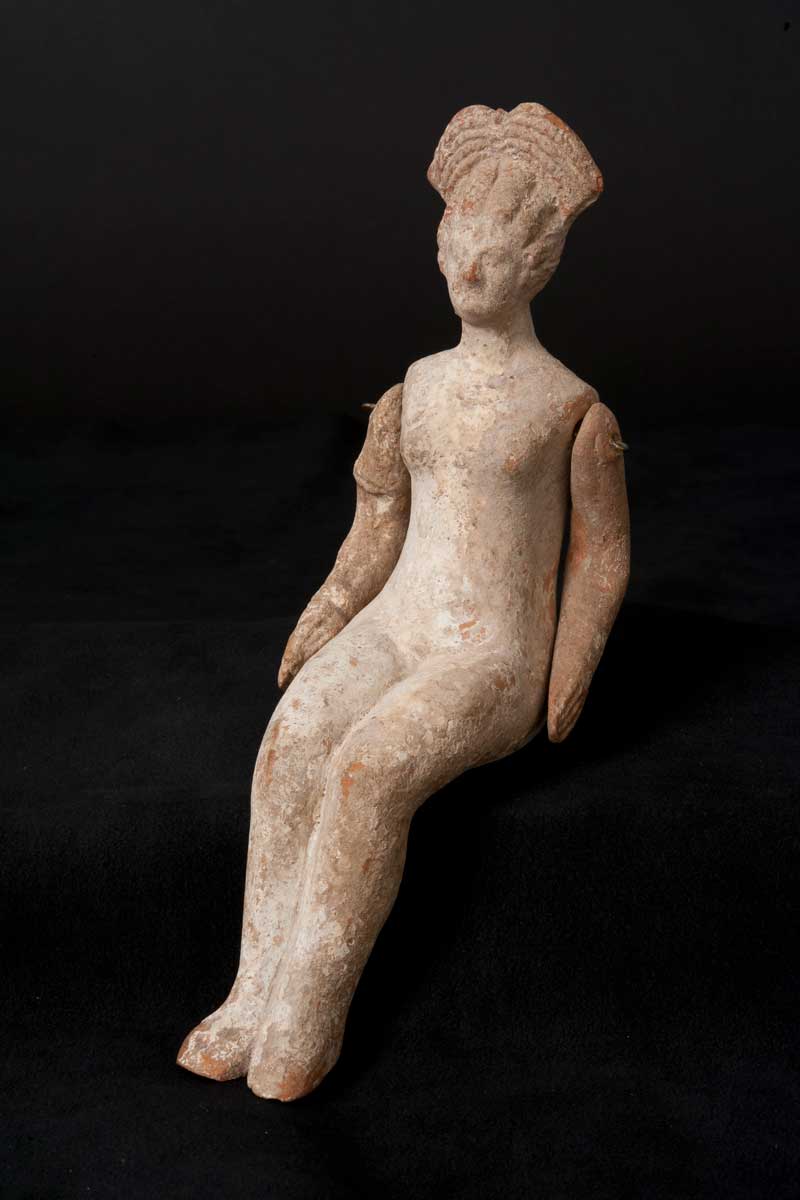 This terracotta doll is dated to the late first or early second century C.E. The figure depicts a seated woman with her legs close together, her elbows bent, and her hands at her side. The fingers and toes are slightly modeled. The torso, head, and legs are all one piece with the arms being made separately and attached to the main body by modern wire, but their fabric and scale suggest that they are original. Two snake bracelets adorn the doll’s right arm. Several real-life examples of such bracelets have been found in the archaeological record. The figure wears a melon hairstyle with five twisted locks on each side of the central part. The rest of the hair is gathered at the crown of her head with five braids cascading to each side.

In antiquity, this doll and others like it, served as dedicatory offerings, grave gifts, and private possessions. They were popular across the Mediterranean, from Southern Italy to Egypt and Asia Minor. In the Roman period, these dolls were sometimes modernized by reworking the hairstyle. This might explain why our doll wears a hairstyle that incorporates the melon arrangement often associated with the Hellenistic period as well as the braided locks at the crown which more closely resemble Flavian and Trajanic fashions.

Nude standing terracotta dolls with joined arms and legs were made as early as the Archaic period in Greece. The finest examples may have been dressed and dedicated as votive offerings, while the simpler versions served as toys. In the 5th century B.C.E., seated doll types with immovable legs, like this one, were introduced. The seated doll types have the arms joined or fixed to the main torso with the hands either resting on the thighs or with one hand on the thigh and the other on the breast. The majority of Greek or Roman seated dolls are nude and unadorned with a few examples wearing more elaborate hairstyles or jewelery. Children would have been able to dress these dolls in real garments.

Dolls were fashioned out of a variety of materials including wood, terracotta, bone, ivory, marble, and alabaster. Terracotta examples are the most abundant in the archaeological record, due to their durable nature and to the fact that terracotta dolls enjoyed a long history throughout the Greco-Roman period. In addition, terracotta is a relatively inexpensive and abundant material, thus it would have been more affordable to a wider portion of the population than a material like ivory.

The doll in the JHUAM collection depicts a well-coiffed young woman wearing ornate jewelery. Toys are means by which children can simulate the activities of their elders. If this object was, indeed, used as a doll than it might have represented an ideal of womanhood to which young girls were meant to aspire. In playing with this kind of doll, young girls were being encouraged to grow into good wives.

This interpretation is supported by the fact that young Greek and Roman girls would donate their dolls, doll clothing, and other toys to the gods, typically Artemis in Greece and Venus in Rome, just before they were married. By dedicating their childhood toys to the gods, these girls were symbolically leaving their childhood behind and moving into the next stage of their lives. For girls, this stage was, of course, marriage.

Thus, dolls were not only precious toys, but also represented the next stage in a girl’s life. For girls who died before they could take this important step into adulthood, dolls were symbols of their prematurely ended lives. Dolls have been found in girls’ graves, and are also shown on their gravestones. In funerary depictions, a child’s a potential as an adult was often evoked trough images of children either at play or participating in moments considered symbolic of the transition from childhood to adulthood. The depiction of a young girl playing with her doll on a tombstone would, indeed, have been a potent symbol.