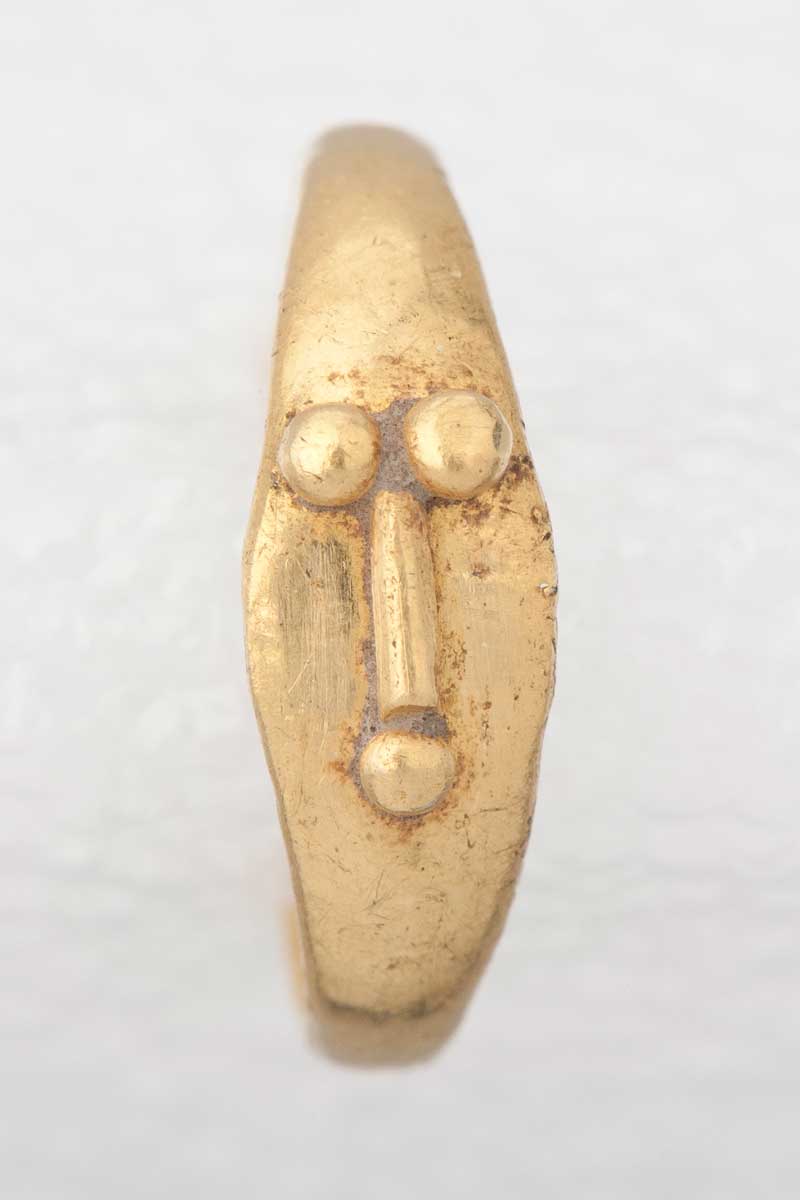 The circumference of this gold ring is too small to fit an adult finger. It was, therefore, most likely made for a child. The ring’s gold band expands to create a bezel that supports a gold phallus in relief. For the Romans, this image of a phallus on a child’s ring was meant to protect the wearer against witchcraft and the evil eye (fascinatio).

In ancient Rome, the phallus was a commonly represented symbol, which was thought to perform a variety of functions. It was a sign of fertility and prosperity, and it could also assert ownership and dominion over a household or other private properties. In Greco-Roman antiquity, phalloi were depicted in a variety of contexts: at crossroads; at the entryway of private houses; and even as decorations on war chariots. Above all, this symbol was considered the mark of the divine spirit of the phallus, Fascinus, and the use of his emblem was meant to invoke his divine protection against the fascinatio.

It is in this light that we should consider the use of phalloi on Roman jewelry. Usually worn as charms or pendants, phallic representations also appear on rings. The phallus was meant to attract the attention of the fascinatio, or evil eye, onto itself and thus away from the wearer. Children, especially baby boys, were regarded as particularly vulnerable to the menacing stare of the fascinatio and in need of protection from its evil powers. Therefore, children were made to wear apotropaic charms to protect them and bring them good luck.

The most common apotropaic charm for children in ancient Rome was the bulla, worn around the necks of young boys. Eight days after birth, sons of free citizens were given their names as well as their bullae, small pouch-like amulets that often held gems or other charms to ward off evil. The boys certainly would have worn their bullae when outside the home, where they were more vulnerable to danger and evil. Bullae were worn until boys reached their early teenage years, at which point they cast off these apotropaic charms as a rite of passage into manhood.

Bullae were made of a variety of materials, from leather to bronze, depending on the family’s wealth and social status. Gold bullae were reserved for the son’s of Rome’s wealthiest families. These boys also commonly wore other gold apotropaic jewelry, like our gold ring. The child who wore this ring was probably the son of a wealthy family, who wore it in addition to his protective bulla. While he might only have worn his bulla when outside his home, this apotropaic ring might have functioned as a more consistent form of protection, as well as a visible mark of his family’s status.