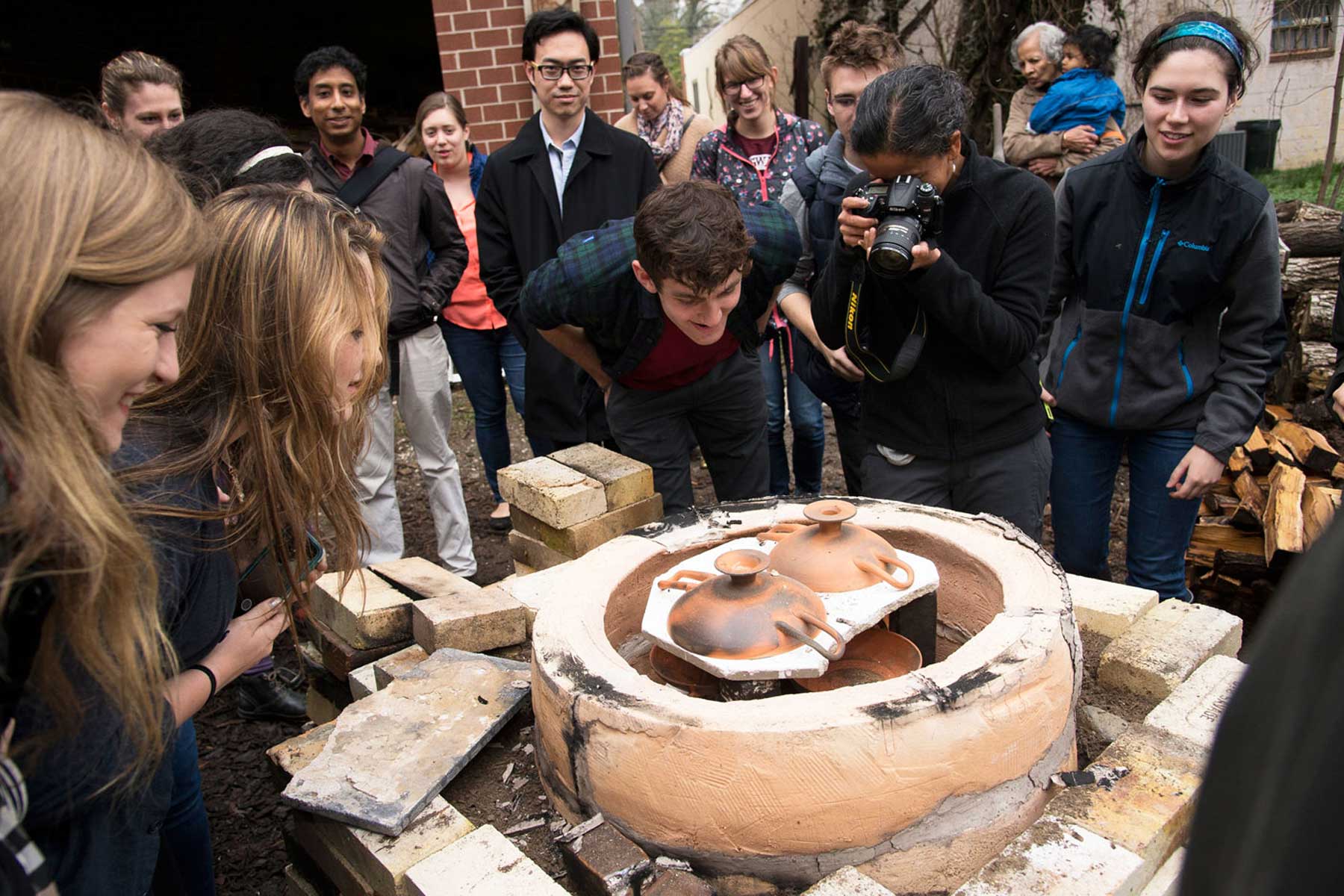 Several apprentices, visitors and the camera crew observe how the pots on the first (top) layer of the kiln fired.

Our dedication, fear, and excitement reached their heights as apprentices, scholars, and master potters gathered around the kiln. Other scholars, many of whom we had the privilege to study and even meet, preceded us in attempting this great feat, but our own methods make our firing unique, and its outcome unknown. There were no longer any sources or evidence from ancient Greece to rely on; the results of our efforts were completely in our own hands, legitimizing us as scholars in our own rights.

Matt and Cami straddled the kiln to remove the first half of the dome and reveal our success. Two test kylikes resting on the top shelf sat entirely intact and displayed darkened areas of scorch marks, possibly blackened slip and burnished sections. This was not a reflection of what occurred in the other layers of the kiln, but it was clear that something definitely happened below. Removing the first shelf exposed two groups’ kylikes and several students’ tiles on the second level. The pottery on this level was red, and the slip had not fully vitrified. The darkest areas of slip were visible in the contour lines and some relief lines, likely because these areas had the thickest slip layers.The third shelf, predicted to be the ideal position in the kiln, supported the second pair of group kylikes and more tiles. At this layer, our only casualty was found: a masterfully painted tile which had exploded into many sherds. This tile was probably responsible for the loud pop heard only an hour into the first oxidation phase, and most likely broke off the handle of the adjacent kylix. This loss was disappointing, but likely occurred regularly in the workshops of ancient Greece. In that sense, the breakage brought us closer to understanding the production process, and should not be though of as a wasted tile. The tile placed flat and in the center of this level reflected the most successful firing result with consistent black slip throughout the image. We have attributed this result to both the ideal positioning in the kiln as well as a thick application of slip. The fourth and bottom shelf, which experienced the most heat in the kiln, was the most successful in producing consistently black slip. The pottery reacted to heat in several ways on this level. Some tiles experienced considerable warpage with totally charred areas. The two kylikes on this level exhibited the darkest areas of black slip, but not consistently throughout the vessels. The slip turned black on the inside of the bowls. 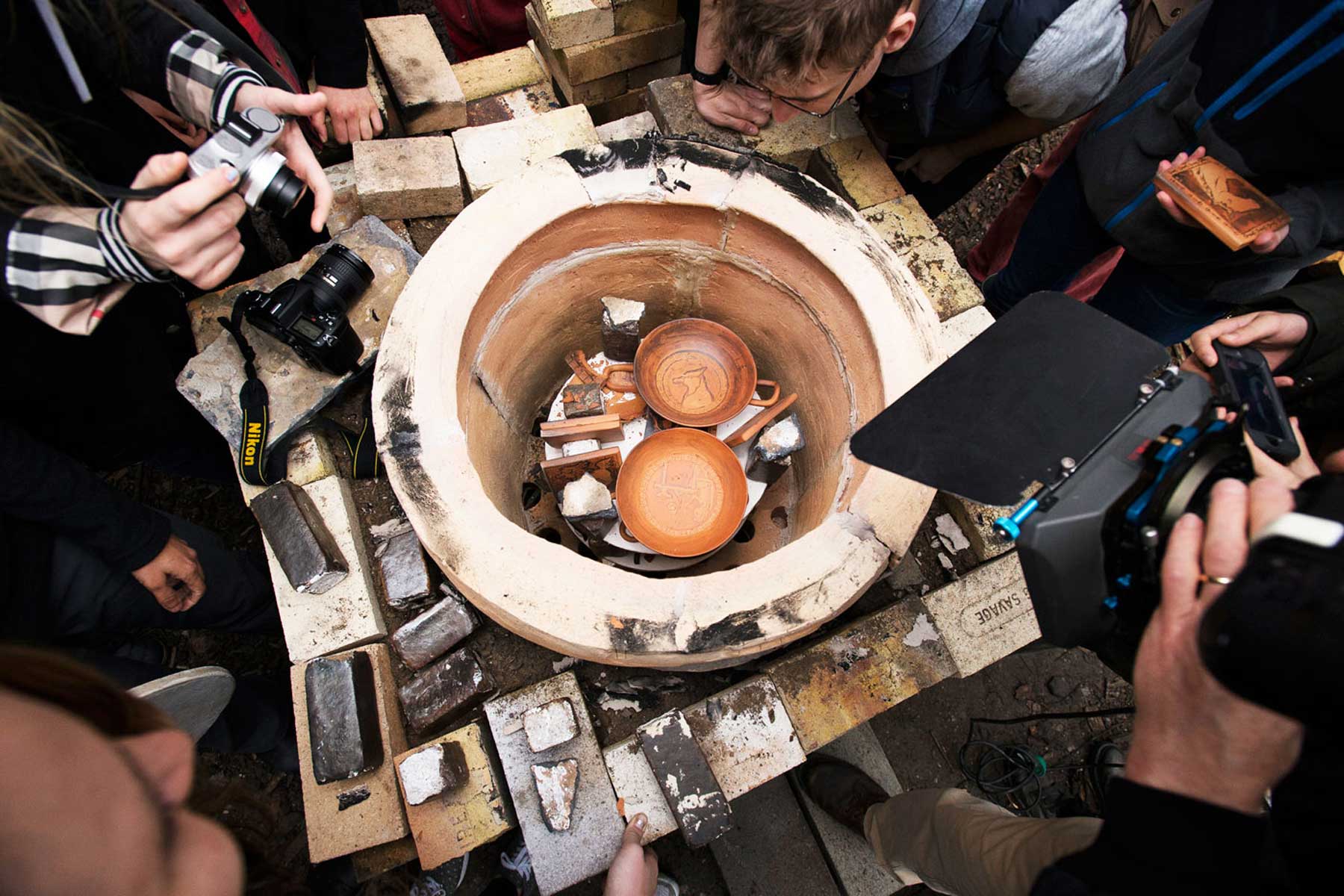 Two cups and several tiles were fired at the third layer of the kiln. One tile did not survive firing.

The two most obvious lessons learned from our first firing were that a significant amount of slip, four layers if not more, should be applied, and that positioning within the kiln makes a huge difference. It was very clear how some tiles and cups were affected by their position in the kiln, showing dark slip only where the object faced the outside of the kiln or obvious brushstrokes across the surface. In other cases, more mysterious phenomena occurred such as glowing red splotches and even an explosion. All of the objects were influenced by the others in positioning and even in evidence of chipping from the explosion. We toasted the success of our first firing with grape juice and noticed that the less vitrified cups absorbed far more of the juice and weren’t very water-tight! And then we made plans for a second firing in June. Next week, we will return to the museum, try to associate our firing flaws and failures with images of our objects in the kiln before the firing, and also compare our replicas with their source of inspiration.