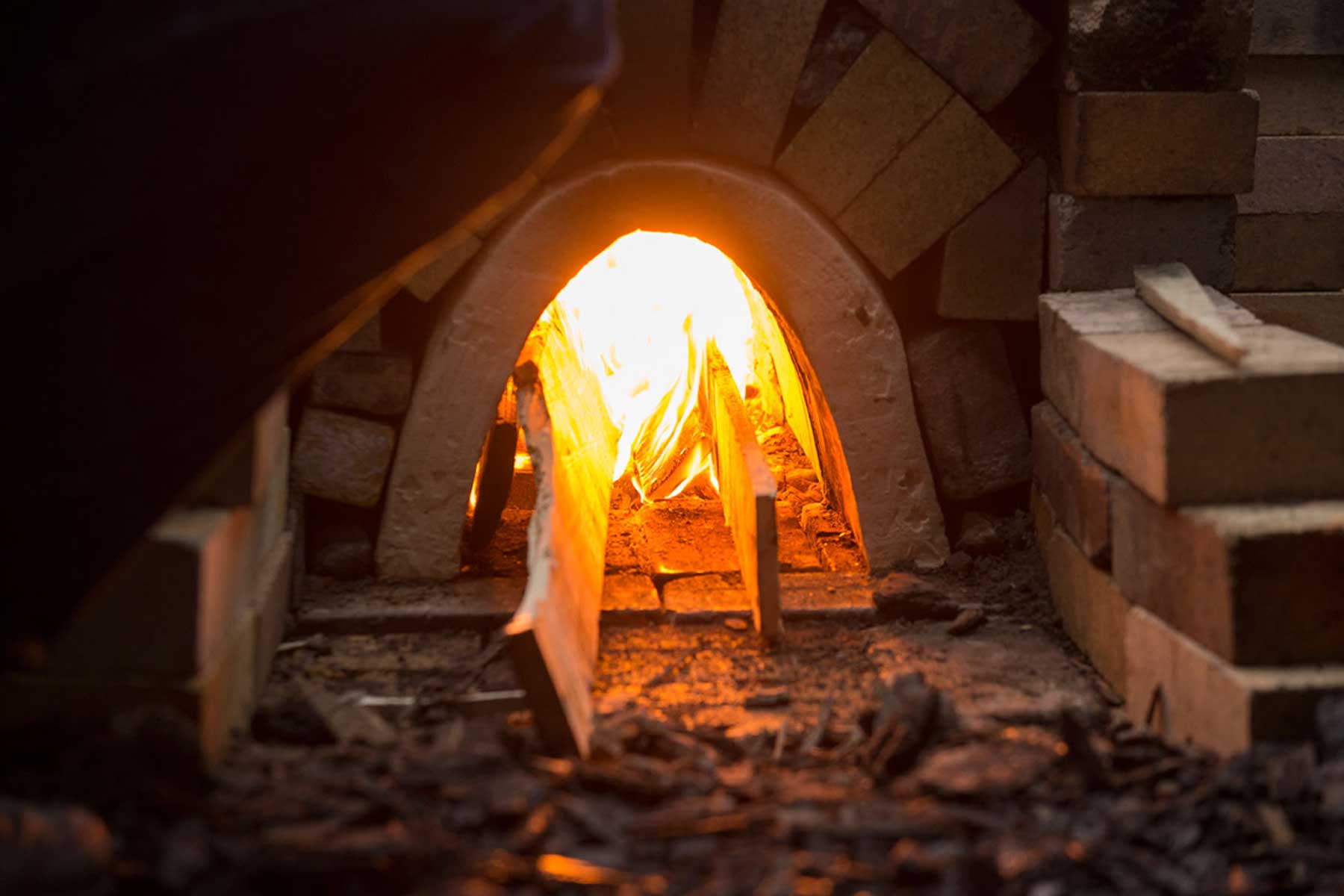 View from the entrance into the firebox.

Finally, we reached the day of reckoning – it was time to fire the kiln. When we arrived at Clayworks at 5:30 p.m., expert potter Matthew Hyleck and Sanchita Balachandran had already been heating the kiln for 7 hours, climbing from 52 degrees to over 1100 degrees. Fahrenheit. This had been achieved by slowly fueling the flame in the kiln’s firebox with small sticks of pallet wood every few minutes, and watching the temperature rise on the pyrometer sensor held into the upper chamber of the kiln. The kiln had thus far been working in a steady oxygen rich environment, and we assumed that our pots were all turning red inside the firing chamber.

After a brief outline of the night’s mission by Matt, we took turns add fuel to the kiln, and recording the changes in kiln temperature and any other observations such as changes in the color of the flame shooting out of the kiln chimney, or the more acrid smell of a reduction fire. Two planks of pre-cut pallet wood were fed into the stoking chamber at a time, initially only letting their ends burn at the tip of the combustion chamber. As the heat from the combustion chamber consumed the wood, the planks were pushed inward a short distance at a time. This process prevents a drastic drop in temperature whenever new fuel is introduced into the kiln. While the temperature rose, we heard from potter John Wissinger and Professor Lisa Kahn of their experiences building and firing a kiln (on which our own was based). They had brought examples of their own pots, some of which had turned perfectly red and black, and others which exhibited firing flaws that we hoped we would be able to avoid. 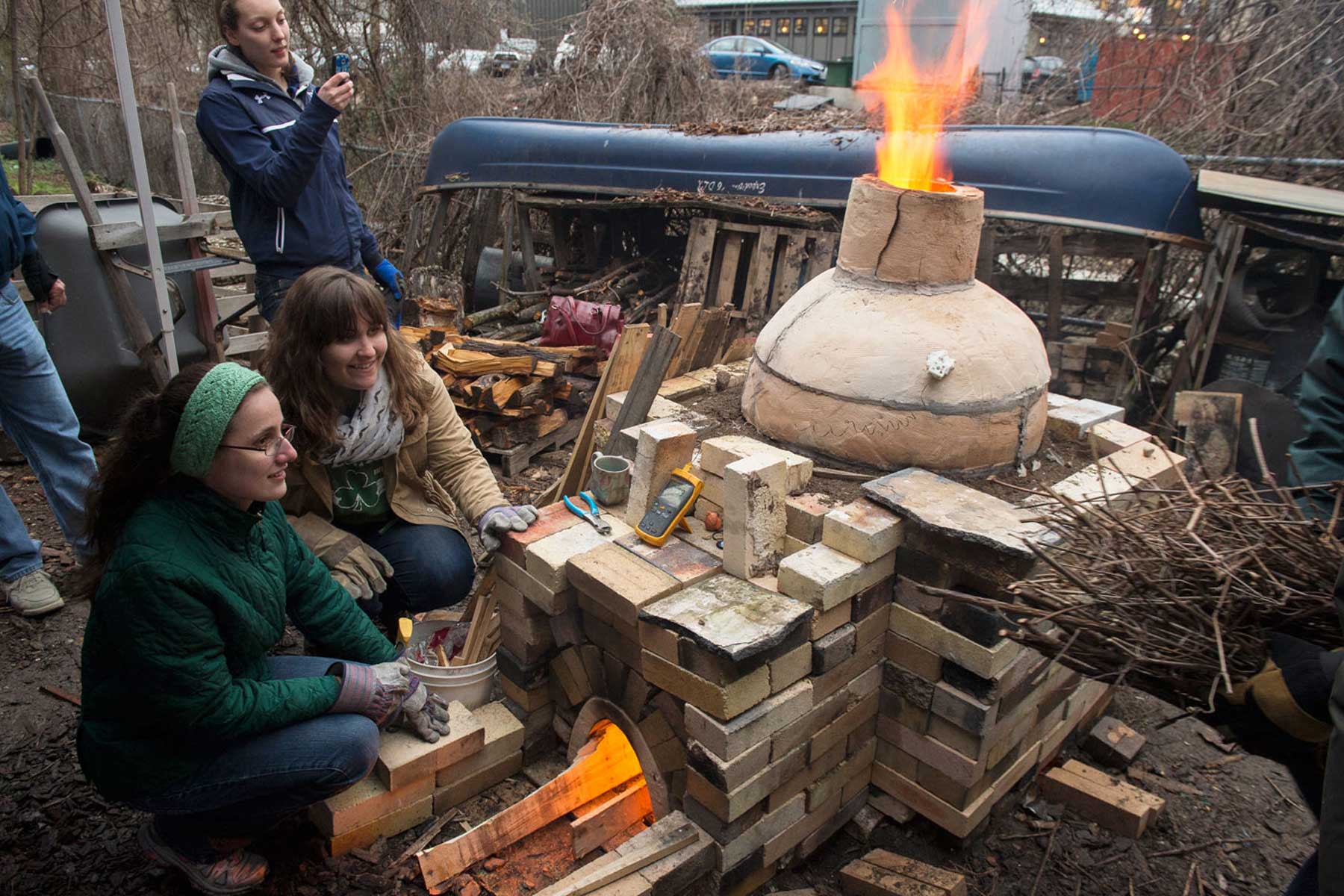 Anna Soifer and Elizabeth Winkelhoff add fuel to the fire.

Our aim was to reach 1452 degrees Fahrenheit, or about 940 degrees Celsius, which is the point at which we would close off oxygen access into the kiln and our red pots would then turn black. However, by 7:16 p.m., the kiln already blazed at 952 degrees C, and there was little time to close down the kiln’s access to oxygen before we risked our pots turning gun-metal gray due to overheating. We quickly closed off the vent-holes at the two sides of the combustion chamber, added three bundles of partially wet twigs to the firebox and sealed off the chimney. A thick smoke permeated through the walls of the kiln, engulfing us temporarily–and we were in the reduction phase of the firing! The temperature inside the kiln quickly plummeted to 749 degrees C as it was starved of oxygen to burn. We spent the next thirty minutes watching the clock, fueling up with pizza and doing two dramatic readings of the ancient poem “Kiln”, which warns of evil spirits destroying pots inside the kiln. After the thirty minutes, we reopened the vents and firebox, preparing for a second oxidation phase, raising the kiln temperature to approximately 830 degrees Fahrenheit again so that the non-slipped areas of our pots could return to red with the aid of oxygen finding its way back into the ceramic fabric. After we reached this stage, we closed off the vent-holes and firebox, but left the chimney open for airflow. At 8:00 p.m., the kiln was left to cool and we were left to wait on the results.

One of our guests at the firing, Professor Eleni Hasaki mentioned that a kiln firing in ancient times was as much a social event to gather the local community as it was a manufacturing process. Indeed, a great number of people – from experts in the field to journalists to residents of the Mt. Washington neighborhood – showed up for this much-anticipated kiln firing. Unlike what probably took place at those ancient gatherings, we could only huddle around the kiln and stare intently at the electronic pyrometer, which jumped every few seconds, while devouring pizza and kiln-glazed marshmallows to keep our bellies full. Kiln firings have become a rarity in our modern lives in much the same way ancient Greek pottery is now confined to museums and archives. Perhaps our attempt here at recreating ancient Greek kylikes is but a form of remembering the ancient cultures and their history.