Sleeping Child with Dog and Grapes 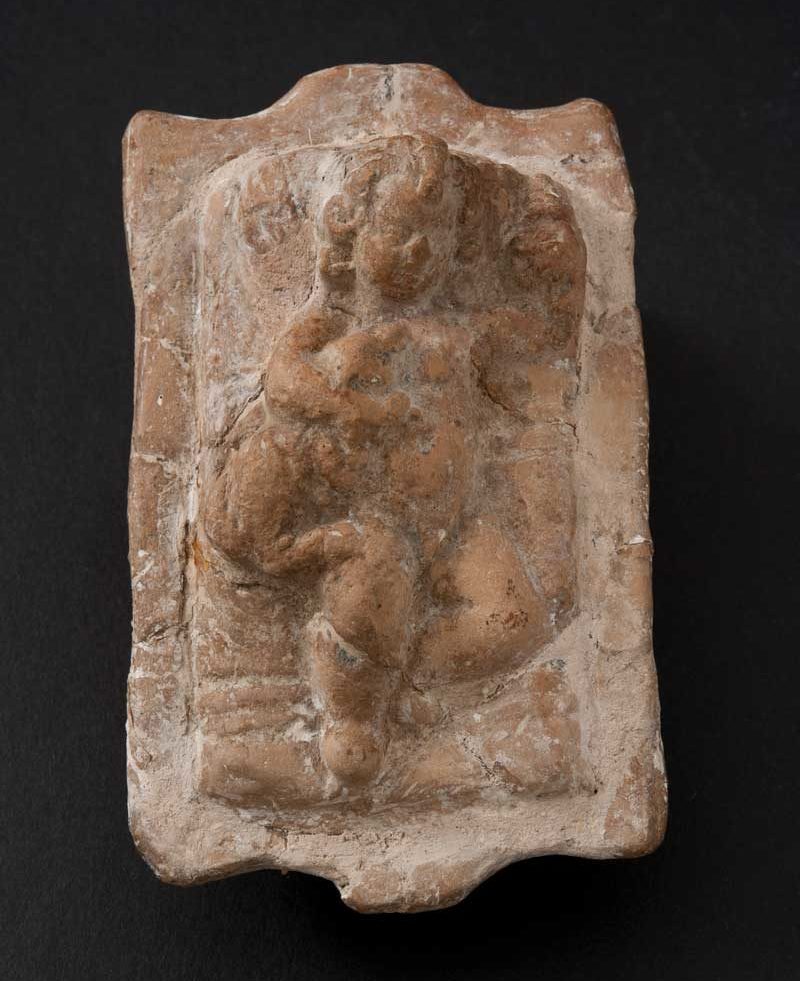 This small ceramic figurine, which shows signs of use and wear, was most likely a child’s toy. The little cradle holds a male infant, with chubby limbs and ringlets on his head. He lies on a mattress or blanket, clutching a small dog to his right side, its neck tucked in the crook of his arm. In his left hand, the child holds a bunch of grapes near his face. The cradle’s curved bottom suggests that the object was designed to be rocked, making it an ideal “dollhouse” toy. Other similar examples of Hellenistic and Roman terracotta figurines depicting babies in cradles are known to us, including one at the British Museum.

A sleeping child was a common subject in Hellenistic and Roman sculpture. Numerous examples of such figurines, dating from the 1st century B.C.E. to the 4th century C.E., have been recorded- a fact that indicates the great popularity of this subject in antiquity. Ancient representations of sleeping babies commonly depict a winged child at rest, surrounded by various attributes. Most commonly, these attributes identify the sleeping child as Eros, god of love and beauty. In early figures, the child is observed clutching his bow with a lizard at his feet, reminders of the god’s tricky mind and fearsome powers. However, later examples from the Roman period tend to place less emphasis on the child’s divine status, turning him into an image of a slumbering baby, who is now surrounded by such everyday possessions as pets and small toys. As noted by Jean Sorabella, this shift in focus has important consequences for the observer: he or she is more likely to identify the later figurines with a real infant, helpless and in need of care. It is in this light that we should consider the terracotta cradled child in the JHUAM. Shown at peace and utterly vulnerable, he is surrounded by attributes of innocence and childhood that are comforting to both child and adult.

The form and function of childhood toys suggests that the ancients were aware of children’s needs and abilities. In fact, some toys seem to have been created with specific age groups in mind. For instance, the ceramic boar and dog in our collection contain small pebbles or seeds within them, and were likely used as rattles by infants or toddlers. However, our cradle, which lacks rattling seeds and rocks just like the real thing, would have been more suited for older children interested in playing house with their dolls.

Many examples of small terracotta toys, like our cradle, have been recovered from funerary contexts. In the case of deceased children, these small playthings were “given” to them at their graves with the intention that they would continue to be children in the afterlife. Some of these terracottas were cast in such a way as to be a comfort to the surviving parents and other relatives, becoming a memorial to a child whose potential future was unrealized. But mostly, by utilizing the popular Eros representation, the child is removed from the human realm to the sphere of soothing fantasy, surrounded by the comforts of a short life. The little boy in our cradle, for instance, lovingly holds a small dog, just as he might have done when he was alive.

In antiquity as now, many children’s toys, from small horses and chariots to babies in ceramic cradles, mimicked objects associated with adulthood. As such, they helped prepare children for their future roles as adults. This notion appears to inform the design of this small terracotta cradle in the JHUAM. This object invites the viewer to look down onto the baby in his cradle, just as real parents might observe a sleeping child. Thus, a little girl playing with this toy would have mimicked the actions of the adults around her. By doing so, she would begin to play the role of caretaker she would, hopefully, perform later in life.