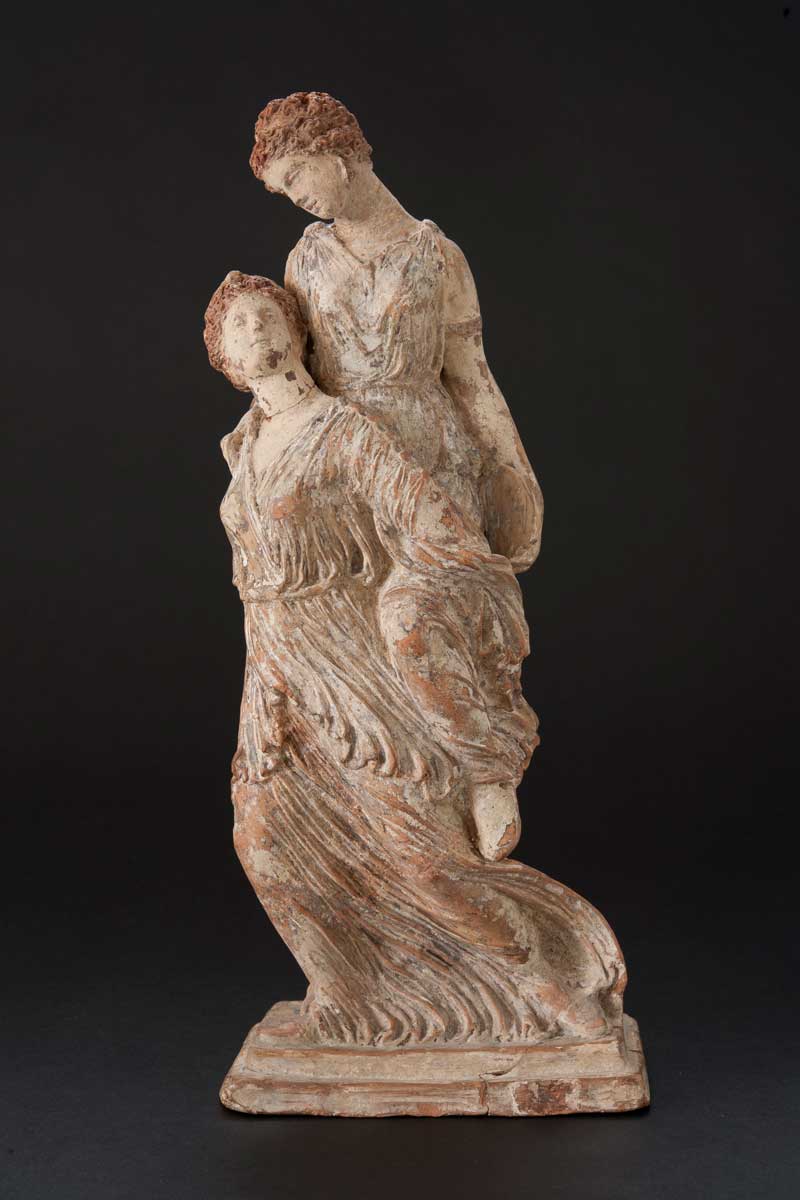 Ephedrismos groups, or piggyback girls, were frequently represented in Hellestic art, and were particularly popular as small-scale terracotta figurines. More than forty terracotta statuettes of piggyback girls have been unearthed since the 19th century. This subject matter was taken from monumental sculpture and was especially popular during the late fourth and early third centuries B.C.E. In the JHAM figurine, the girl on top holds a round shaped discus with her left hand. Both figures are attired in a heavily pleated chiton or tunic. Their clothes, which appear to be windblown, cling to the girls’ bodies in a sensual manner. Both of the girls have vibrant red-orange hair that is styled into high-piled buns. Their delicate facial features are strikingly similar. The two girls are shown gazing at one another—a detail that adds a note of intimacy and sentimentality to this composition.

In antiquity, such figurines of piggyback girls were understood as representations of the ancient game of ephedrismos, which was specially popular among young women. The game was played by first placing a stone on the ground and then throwing a pebble or a ball at the set stone, in an attempt to knock it over. The player who was unable to overturn the stone had to carry the winner on his or her back, while the winner covered his or her eyes. This part of the game continued until the loser was able to touch the overturned stone. Although ephedrismos groups depict a scene of everyday life, they also had an additional, symbolic meaning. The winner in this game, who is carried on the loser’s back, was seen by the ancients as symbolizing Eros or Aphrodite. Therefore, the representation of a young girl playing ephedrismos could be interpreted as a sign that she was betrothed to be married. The erotic and epithalamic associations of the game of ephedrismos might explain why more women are portrayed in these groups than men.

Given the great popularity of this subject in antiquity, it is not surprising that numerous copies of ephedrismos groups were also produced in the nineteenth century. Although the JHAM figurine closely resembles genuine Hellenistic terracottas, it exhibits characteristics that point to a later production date. For instance, the amount of color, especially that used on the girls’ hair, is atypical for a genuine Hellenistic terracotta statuette. Although traces of color do survive on a number of ancient figurines, it is highly unlikely that such a vibrant tone of red would have been preserved through the centuries. The depiction of drapery in the JHAM statuette is also inaccurate. The windblown motion of the girls’ garments is excessively artificial and dramatic, especially when compared to the more natural flow of fabric in Hellenistic sculpture. Moreover, the intimate, sentimental bond between the two girls in the JHAM terracotta is more characteristic of nineteenth-century art than Greek sculpture. Lastly, the discus held by one of the girls does not fit in with ancient iconographic models for this group. After all, discs were not used to play the game of ephedrismos. In some cases, ancient figurines of ephedrismos layers show them holding either a rounded stone or a ball, but never a discus. These physical and iconographic traits indicate that the JHAM epherdrismos group is a nineteenth-century replica of a well-known and well-documented ancient statuary type. As such, it helps us understand the reception of Classical art in nineteenth-century Europe, and in particular the taste of Victorian collectors for whom these pieces were produced.