Week 13–The Potters Themselves 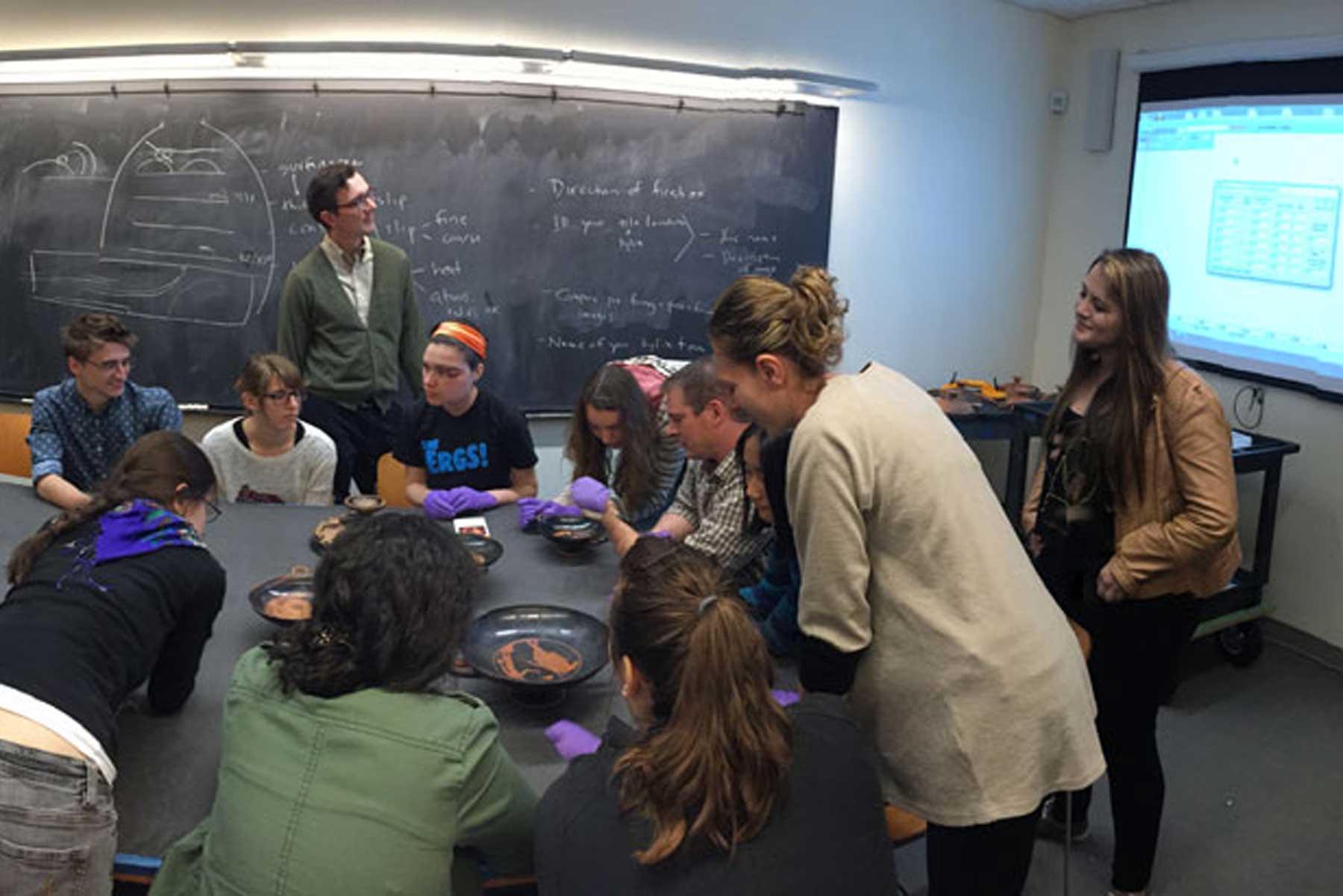 The class gets one last period of reflection over the ancient works as the portable x-ray fluorescence instrument gets set up.

With just two weeks left of class, the Recreating crew met for one last lesson, exploring just who the Greek potters and painters were, where they worked, how they worked, and also the characterization technique of portable X-Ray Fluorescence spectroscopy (XRF). This end-of-the-course class had a particularly heavy reading load, as we explored ancient Greek ceramics beyond their mere technical fabrication, harkening back to our first lecture with Professor Alan Shapiro. We turned our eyes towards the workshops that produced the wares, reading the works of Elizabeth M. Langridge-Noti, Dyfri Williams, and the day’s guest lecturer, Professor Philip Sapirstein. All of these scholars zoomed us back in time to the ancient city of Athens, wherein clay wares permeated the urban landscape, from the workshops stationed next to major trading routes, to the commercial wares stands within the Athenian Agora, and even beyond, in long-distance commerce, to the regions around the Mediterranean, full of consumers hungry for the expertly-produced, fine Greek masterpieces.

After discussing the readings we found ourselves once again powering up the typically finicky technology that attempts to link us over video-call to the academics who otherwise would not be able to share with us their work in the field. Professor Sapirstein, beaming in from the University of Nebraska-Lincoln, led us on a guided tour of his highly refined catalogue of potters, painters, potter-painters, and their extant corpora of vessels. His classification builds upon the landmark work of J.D. Beazley, whose index we explored regularly in our class. As Sapirstein presented, familiar names like “Makron” and “Douris” assumed identities beyond the slipped signatures they signed on their wares, as a network of these potters and their contemporaries were compared head-to-head in categories such as work span, number of works, and the number of people they worked with. Such a robust system was necessary in order to answer the larger question of, How large was the Greek pottery industry, and can we identify how productive vase painters were between the 6th and 4th centuries BCE? According to Sapirstein, the available evidence suggests that the more prolific specialist painters (about 36 in total) produced, on average, 8 vases per year. 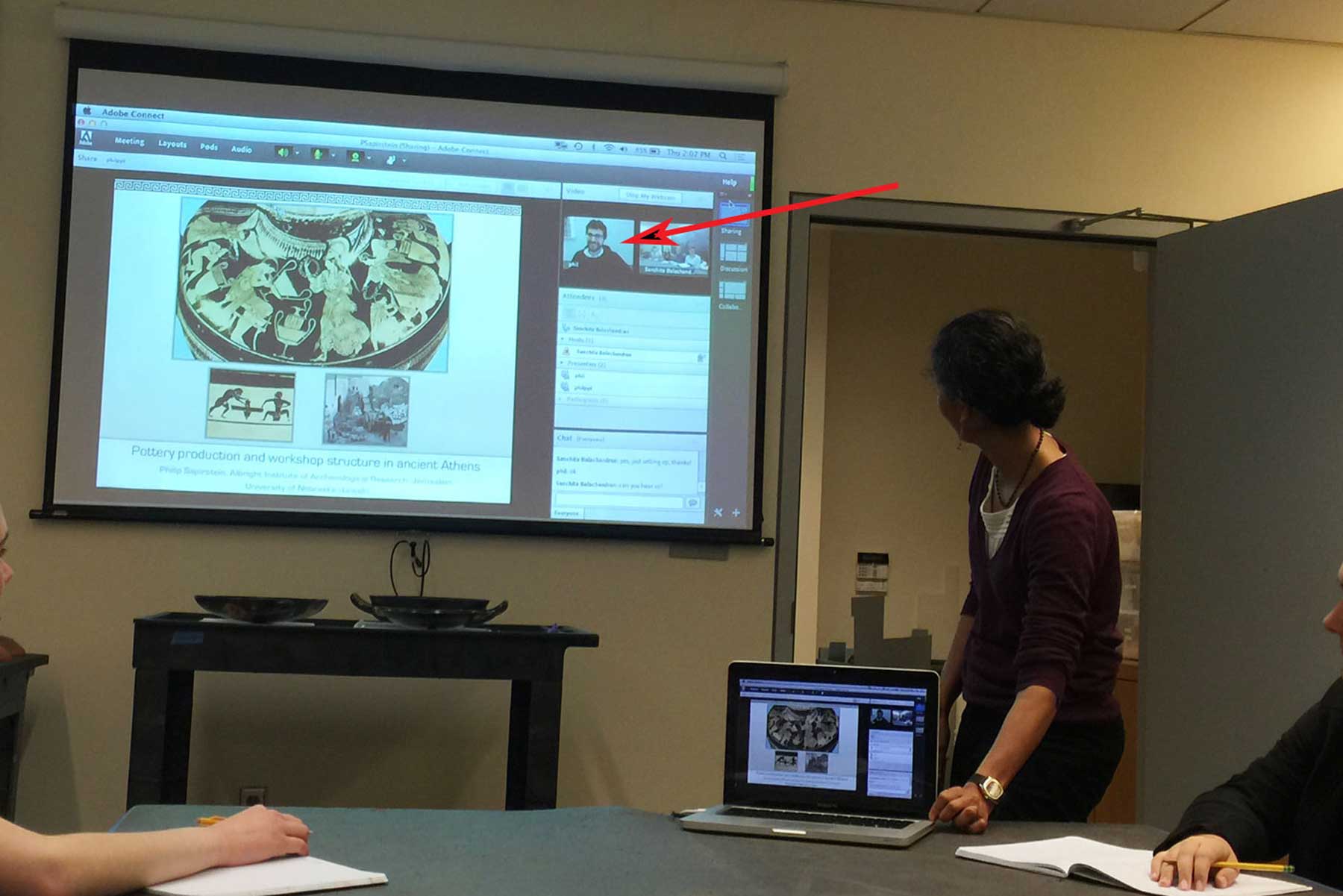 Using the power of the internet to watch and listen to Professor Philip Sapirstein (the red arrow points to him).

The students had so many questions for Professor Sapirstein at the end of his lecture that it was starting to look dubious whether we’d even get to the XRF lesson, which I had been looking forward to for a while. Luckily a quick show of hands revealed we as a whole still wanted it, so we set up the instrument to examine our fired tiles, and to compare these analyses to those completed on the ancient examples in the museum. X-ray emission peaks for iron, silicon, titanium, aluminum, zinc, and many other elements arose in pairs when the analyzer fired its high energy electromagnetic waves at the unslipped back of one of our fired tiles. The spectrometer hummed as it pulled a light vacuum over the sample, in order to minimize interference from the air in the room. Balachandran gave a quick remedial lesson in electron orbitals, and the excitation energy they emit when they are struck with a sufficient amount of energy, and fall back down into their lower energy state. As a materials science student, I had learned about this technique in previous classes, but it was a delight watching it work in person. Although the results of the analysis don’t speak for the quantity of elements in the sample (portable XRF is a qualitative technique), they can be compared relatively to one another. So when we turned the tile around, and analyzed the slipped side of the tile, we indeed saw a difference—namely, higher potassium content which was likely from potash added to levigate the slip, as well as higher iron peaks, possibly associated with the more dense, vitrified slipped areas. A tile that had been slipped with a special slip prepared by soaking in zinc sulfate (or white vitriol) showed a significantly more intense zinc peak, something has been suggested in the analytical work of Dr. Marc Walton and his colleagues. This concluded our penultimate class.